The 2018 Olympic Winter Games in PyeongChang, South Korea, will be viewed by millions. Some of the athletes and coaches, however, use their spare time to save lives.

One such athlete, Meagan Duhamel, a two-time world champion pair skater, is returning to Canada this year with an Olympic gold, but off the ice, the figure skater has been working to raise awareness of South Korea’s dog meat industry since rescuing a dachshund mix named Moo-tae last year. 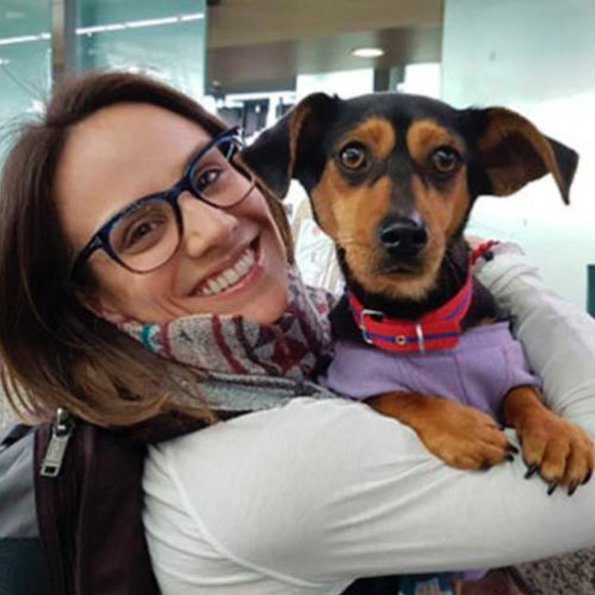 “Most of the time, he just wants to sit in everybody’s arms,” Duhamel said. “He doesn’t even care to play, he just walks up to everybody and wants to be held.” Moo-tae sits with his mom while she meditates daily, a habit he might have picked up while living with Buddhist nuns.

“He brings a very special energy,” Duhamel explained. “I meditate every day, and he sits beside me patiently while I meditate. I don’t know if he was trained to do that.”

Duhamel travels to South Korea where she serves as a flight volunteer, ferrying dog meat farm survivors to forever homes in Canada. Once the Olympic games are over, she intends to bring even more at-risk pups to North America where they will be adopted. 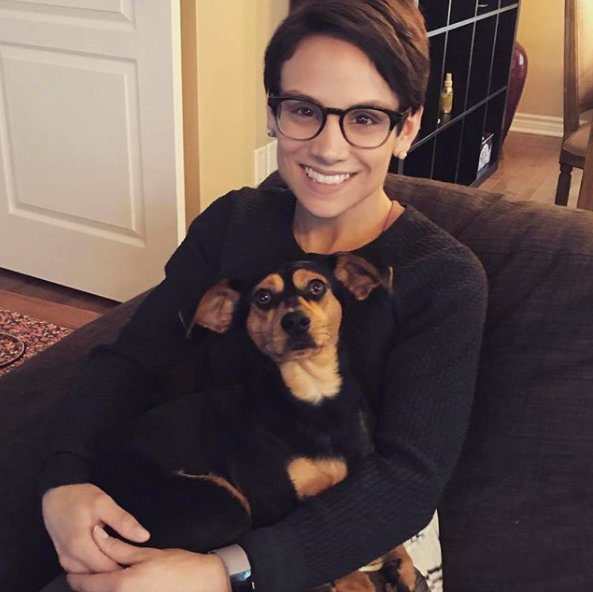 Duhamel first became involved in Korean dog rescue while she was attending the Four Continents Figure Skating World Championship in PyeongChang, as a competitor for the 2018 Winter Olympics, in February 2017.

That’s when she came across international rescue organization Free Korean Dogs and spotted a picture of 2-year-old Moo-tae, who narrowly escaped the meat trade when he was rescued by Buddhist nuns.

During one of the brief breaks in her competition schedule, Park drove eight hours to bring Moo-tae to meet Duhamel.

“They had two hours of wonderful time in the hotel room,” Park said. “After two days we met at the Incheon Airport again to send Moo-tae to Canada. Meagan, of course, flew with him.”

Duhamel has earned a Team Figure Skating gold medal and will be bringing another lucky dog home with her: Ha-Wool, a 3-year-old beagle rescued from a high-kill Korean shelter. When he is safely on Canadian soil, Ha-Wool will be ready to find his forever home. 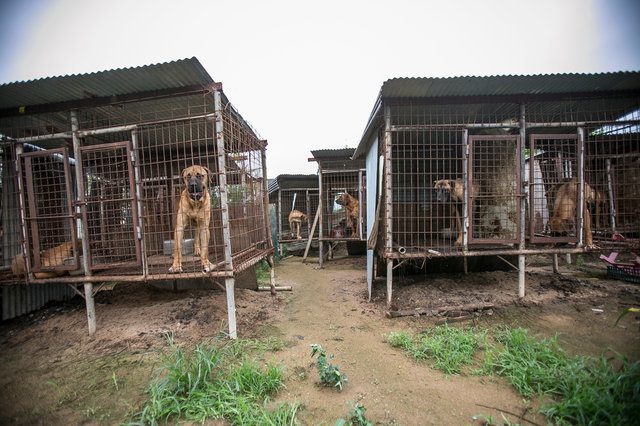 Park said each year 2.5 million dogs are tortured and killed for their meat in South Korea. Approximately 70 percent of these dogs are slaughtered during Boknal, a dog meat festival that takes place during the hottest days of summer. Some restaurants within walking distance of the Olympic games still list dog meat on their menus.

In the mountainous Gangwon province, where the games are being held, seven cities and 11 counties there is a total of 196 registered dog farms. The practice of eating dog for alleged “medicinal” benefits is becoming increasingly taboo among the younger generations in South Korea, however, eradicating it entirely may be difficult. 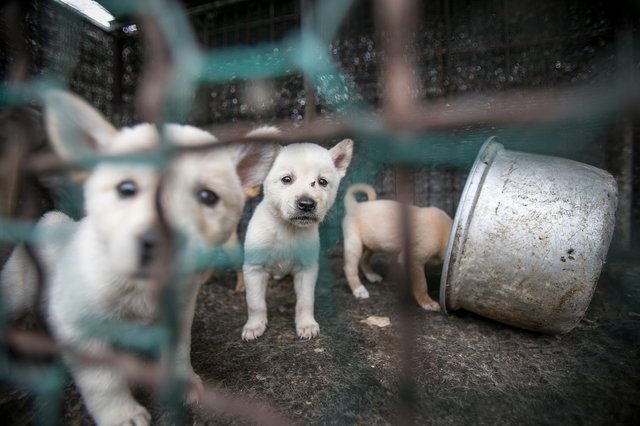 “The industry is starting to yield under pressure, as public awareness increases about the cruelty associated with the dog meat trade. However, we still have a long way to go,” Park explained. “Legislation and regulations regarding the dog meat trade in Korea is still a huge gray area, meanwhile the dog meat business union gets stronger and fights hard to keep their business.”

Park has seen an increase in interest from around the world, receiving emails and phone calls every day from people asking how they can help end the dog meat trade and save Korean dogs, since the start of the PyeongChang Olympics. “The greater the public awareness,” Park added, “the stronger the opposition.” 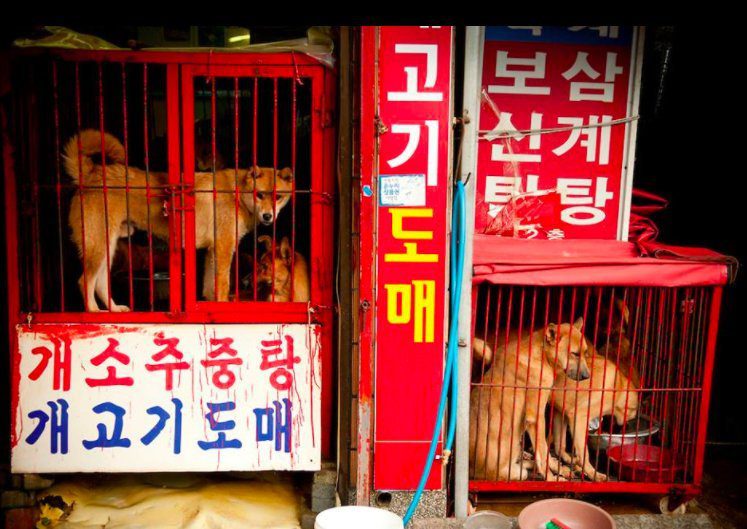 “I think the Olympic Games have provided an excellent opportunity to raise international awareness about the Korean dog meat trade,” Park said. “However, soon the games will be over, the media will shift their focus elsewhere and the dogs of Korea will be forgotten by most of the world.” The key is to keep the momentum going. 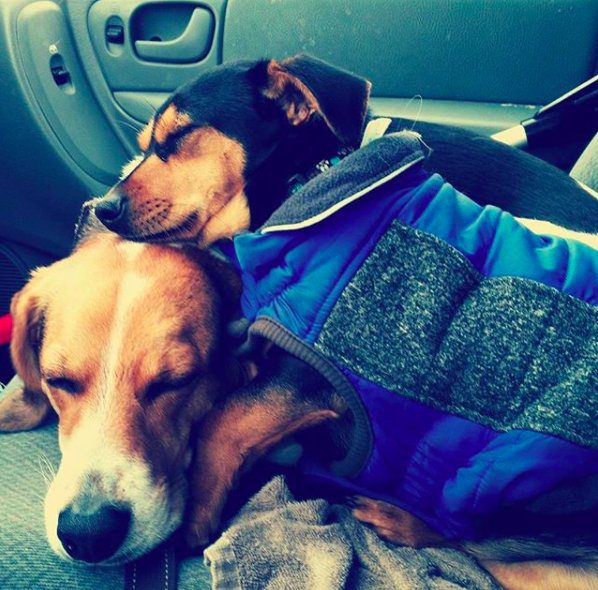 “Now that Moo-tae is free from the Korean Dog Meat Industry, he enjoys lounging in the sunshine in the safety of his home,” Duhamel wrote on Instagram.

He is a constant reminder to his mom that these resilient dogs can find the loving families they so deserve.