Cheetah a 43-year-old  chimp paints as if he’s been doing it his whole life. He sits at his canvas, gently opens up his paint jars and lathers a bit of yellow across the smooth paper with his brush. 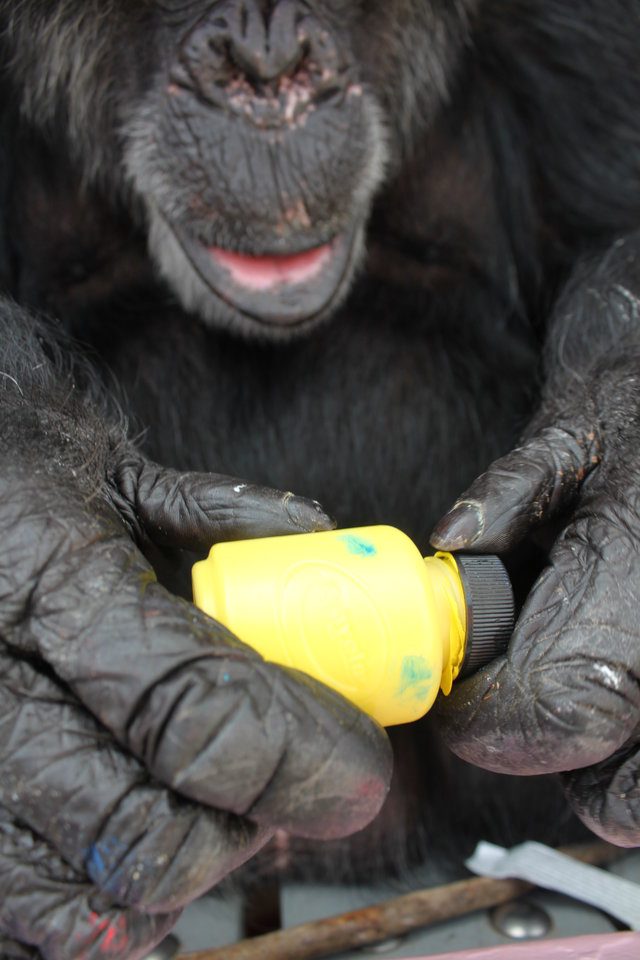 He then ponders the next color to add and sticks the end of the paintbrush in his mouth.  Then, he pauses for a moment before mixing together two other colors to make the perfect shade.

Cheetah swirls and dots the paint on the canvas, and even spreads a bit of bright purple onto his arms and mouth. He loves getting messy when he’s working on a new masterpiece.

It may just look like he’s playing, but his caretakers at Save the Chimps sanctuary, think art has become one of the greatest therapies for the chimp. Cheetah spent the greater portion of his life in a laboratory.

Cheetah had lived in two different laboratories since the 1980s, where they frequently performed painful biopsies on his liver for hepatitis research. He lived alone and was never given fresh fruit or vegetables. He hardly ever saw other chimps, and his only interactions with people were with latex-gloved researchers. His caretakers estimate he was used for over 400 biopsies. 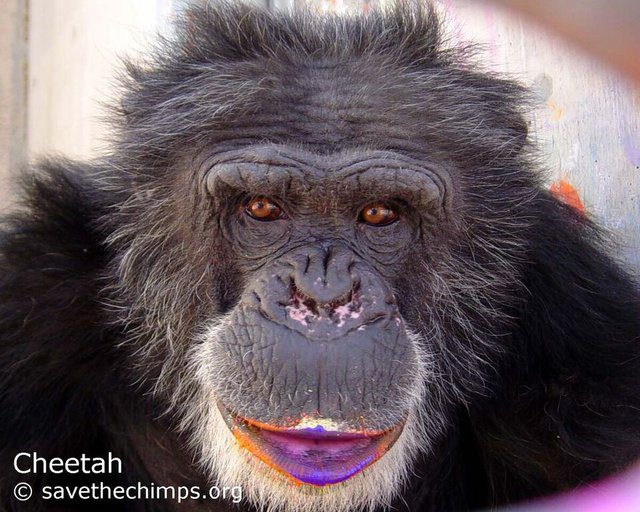 “He lived in an area of the lab termed ‘the dungeon,’” Andrew Halloran, director of chimp care for the sanctuary said. “It was downstairs, there were no windows and it was very small. It was not clean at all — just deplorable conditions.”

The New Mexico lab The Coulston Foundation, where Cheetah most recently lived, went bankrupt in 2002 and left all of its chimpanzee residents with nowhere to go. Save the Chimps began caring for the animals at the facility. The sanctuary prepared to transfer the nearly 200 apes.

Caretakers gave them fresh fruit, vegetables, blankets, and toys to play with too make the chimps more comfortable while they waited to be transferred. They also gave them some non-toxic paint, brushes, and paper. 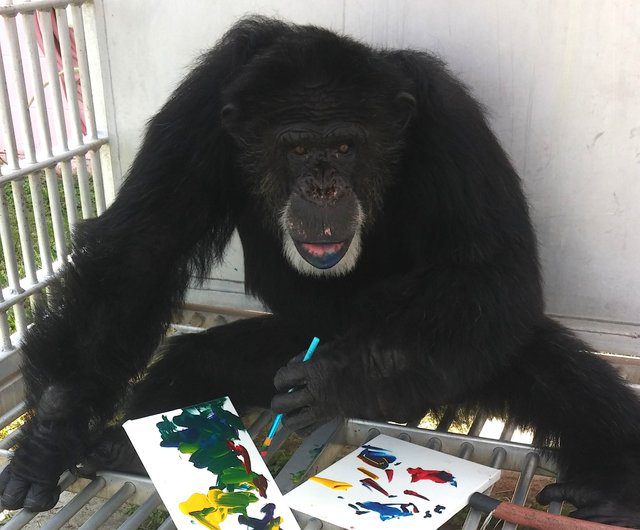 From the beginning clearly, Cheetah was a budding artist. He was brought to a brighter enclosure, where he went right to work splashing paint onto paper and even onto the walls. His paintbrush colored the boring concrete walls of the pen. The caretakers joked that he was trying to make his barren home look better. 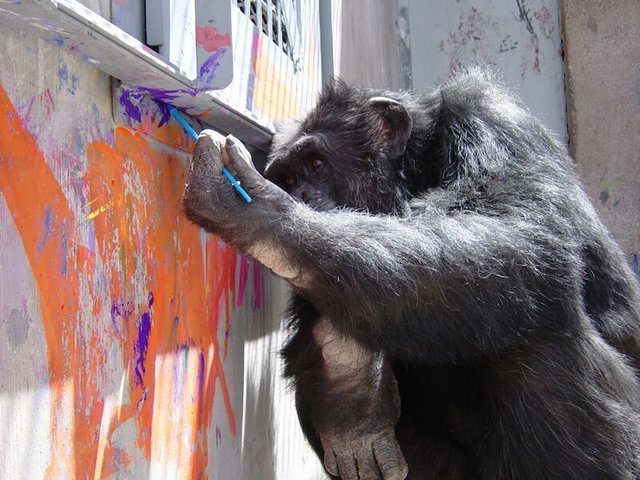 Cheetah finally had something in life that would bring him joy after so many years spent between scary experiments and staring at a wall.

“Nobody knew how he would react to the paint,” Halloran said. “But it quickly became one of his favorite things.”

Cheetah was not only happy to liven up his room but working on art helped him relax and have fun. For years he lived with no puzzles, toys or other activities to cope with the stress he lived through. Art is used as an enrichment activity for many sanctuary chimps because it helps them unwind.

Cheetah was glad to no longer be alone and took to his caretakers instantly and was just glad to be able to socialize with someone despite his history of being used in experiments.

“Cheetah has always been very people-oriented,” Halloran said, noting that Cheetah has even taken to grooming his caretakers as a way of bonding with them. “He’ll just sit down with us and groom our shirts or our boots.” 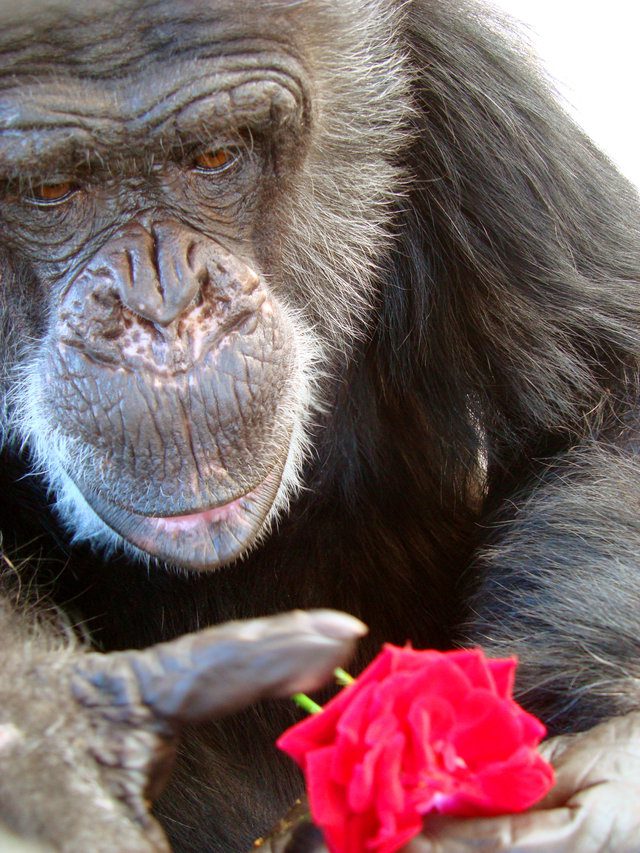 Cheetah, unfortunately, was not raised in a typical chimp social group, so he prefers the company of humans and his one roommate, Timmy, who was also rescued from the lab. Normally, they would live in a traditional large chimp family.

Cheetah’s past before the lab is unclear, Halloran said it’s likely he was originally captured from the wild as a youngster. Chimp moms are usually killed when their babies are taken so they won’t try to protect them. 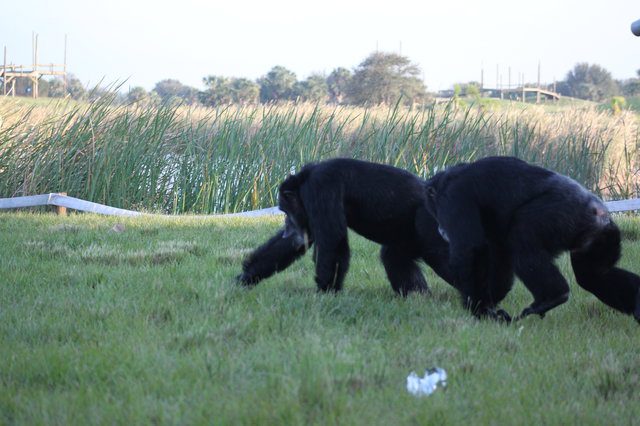 Cheetah, like any true artist, waits for the right inspiration before starting a new painting. Some weeks he won’t even go near his paintbrushes, and other times all he wants to do is spend time in front of a canvas.

Cheetah’s talents haven’t gone unrecognized. “His paintings are some of the best ones here,” Halloran noted. 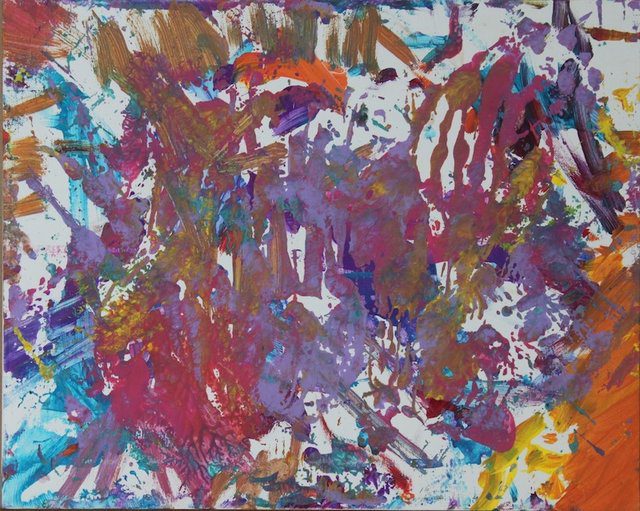 The sanctuary often sells the art online to fundraise.

Cheetah’s sweet disposition, even after all he’s been through, makes him stand out most to his caretakers. 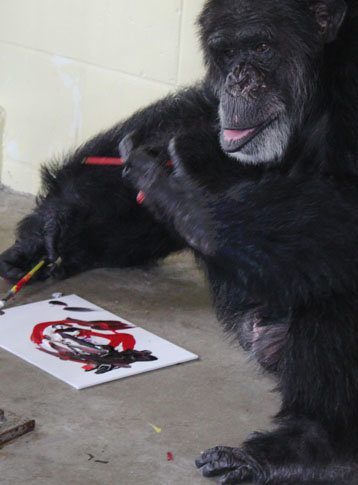 “We try really hard not to have favorites around here,” Halloran said. “But he’s everyone’s go-to chimp.”