Rangila and Sridevi, two sloth bears, were snatched them from their mothers in the forest and sold them into the entertainment trade in Nepal. Trainers pierced the cubs’ sensitive snouts with hot needles and threaded ropes through the holes when they were only a few months old. Then, trainers yanked these ropes to make Rangila and Sridevi dance and move around on cue. When they performed in public, the bears’ tricks procured cash for the trainers.The poor bears never really got the chance to live as wild bears.

Then Rangila and Sridevi were forced to start performing. At only a few months old, trainers pierced the cubs’ sensitive snouts with hot needles and threaded ropes through the holes. Then the trainers yanked these ropes to make Rangila and Sridevi dance and move around on cue. When they performed in public, the bears’ tricks procured cash for the trainers. 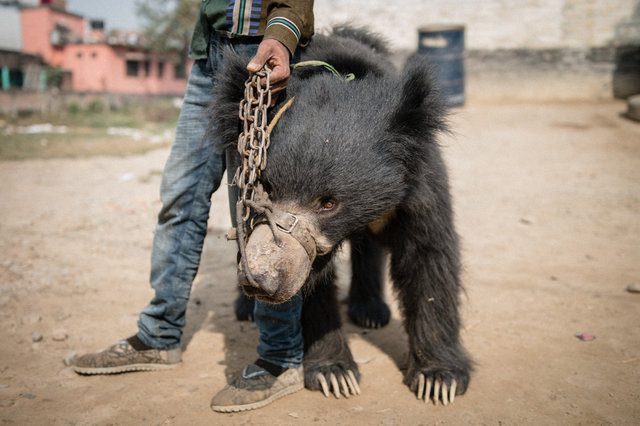 One of the last two dancing bears in Nepal

In Nepal, it is actually illegal to make bears “dance” and it has been since the country passed an animal welfare act in 1973, according to Neil D’Cruze, wildlife technical expert for World Animal Protection (WAP).

Nepali trainers have surrendered their dancing bears to the authorities, but the people who owned Rangila and Sridevi found ways to keep operating. 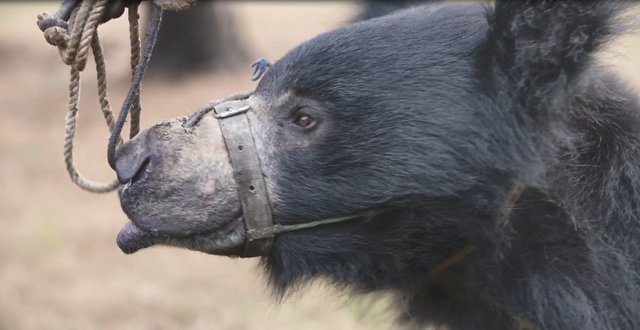 “The remaining owners were forced more and more to go away from the urban provinces and to go further and further out into the hinterland where … they were more able to escape the eyes of authorities and NGOs,” D’Cruze said.

The trainers got away with it for years and years. Rangila was 19 years old and Sridevi was 17 by the time help came. They were the last two dancing bears known to exist in all of Nepal. When D’Cruze first heard about Rangila and Sridevi, he flew to Nepal. He was with team members from the Jane Goodall Institute Nepal to help rescue the bears. D’Cruze and the contacted the bears’ owners, and the owners initially agreed to surrender the bears to the rescue team’s care. That was when something went wrong.

“Unfortunately, we’re not exactly sure about what went down, but they got spooked,” D’Cruze said. “And rather than meeting with us, they essentially hit the road and went on the run. So there was about four to four and a half days of very frustrating phone calls with them where we were being sent to different directions, and going to different locations where they didn’t turn up.” They were extremely concerned about the bears’ welfare, and they persisted but when they hit a dead end, they stopped by a police station.

“We managed to speak to the superintendent at that time, who said, ‘If you’re able to share the phone number, we can try to locate their position,’ which happened instantly, pretty much,” D’Cruze said. 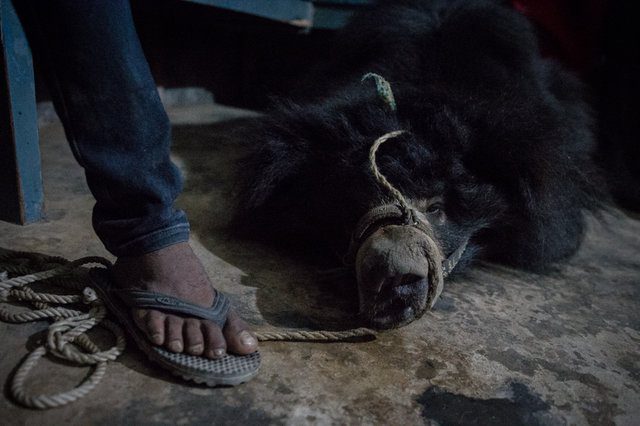 Finally, the authorities located both the owners with the bears and brought them all into the station. “Things were still very tense,” D’Cruze said. “There were a lot of discussions with the police and the owners, trying to get information from them.”

The rescue team was able to take the bears into its care the next morning. While Rangila and Sridevi seemed to be in good physical condition, they were both suffering psychologically. 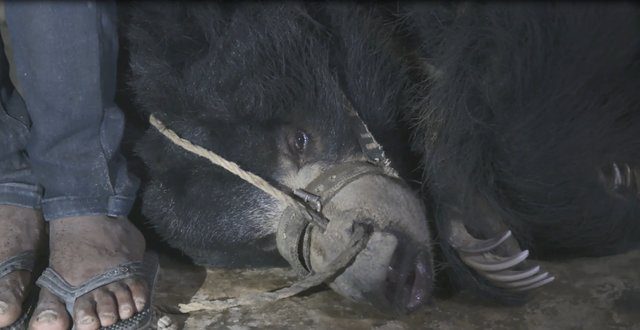 “They were obviously in a very bad way in terms of paw sucking and pacing up and down,” D’Cruze said, both behaviors that are common in animals stressed out by captivity. “The male [Rangila] in particular was very aggressive if anyone came him. And the female, Sridevi, was hiding her head in her paws. So they had very different reactions to this stressful life that they had led.”

“The whole team — all of us — were just completely shell-shocked,” D’Cruze added. “We were trying to keep it together.” 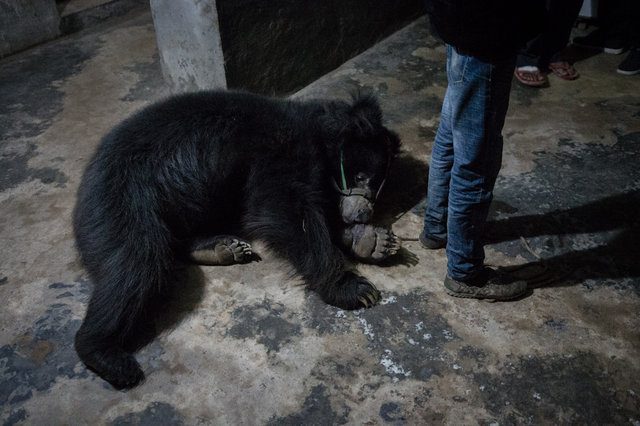 They contacted the Amlekhgunj Forest and Wildlife Reserve in Parsa, Nepal, where they’d stay until they could be moved to a sanctuary. The team decided that it was in the bears’ best interest if their trainers stayed with them for a little while longer. They convinced them to accompany Rangila and Sridevi to the forest.

“In many cases, the bears have spent their whole life with the owner,” D’Cruze said. “So in the short term, before they move to that long-term sanctuary … it’s actually [better] having someone who understands the bears.” 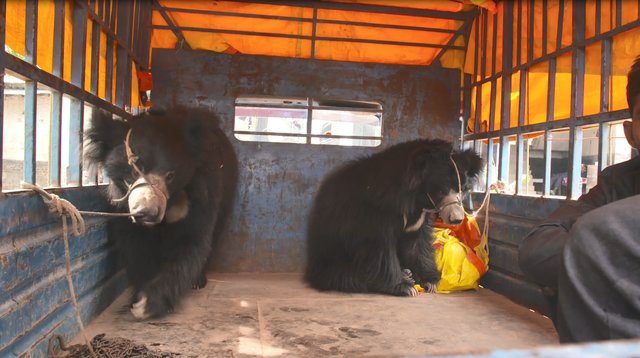 “There’s a very strange relationship between the bears and the owners,” D’Cruze added. “On one hand, it’s incredibly cruel that the bears are kidnapped and stolen from their mothers. But they [the trainers] don’t hate the bears.”

The rescue took Rangila and Sridevi onto a truck and drove them to the reserve. D’Cruze said he will never forget the shift in the bears’ behavior when they entered the forest, and took in the sights and sounds they hadn’t experienced since they were cubs. 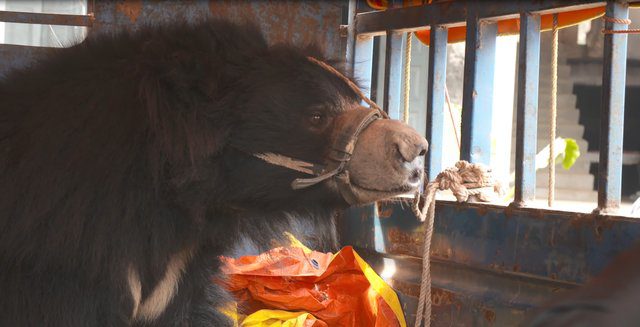 “You could just instantly see that the bears were so much more relaxed,” D’Cruze said. “It was great to see that it was all worth it.”

It will still take Rangila and Sridevi a long time to get over their emotional trauma, but the rescue team is confident that their lives are changing for the better. 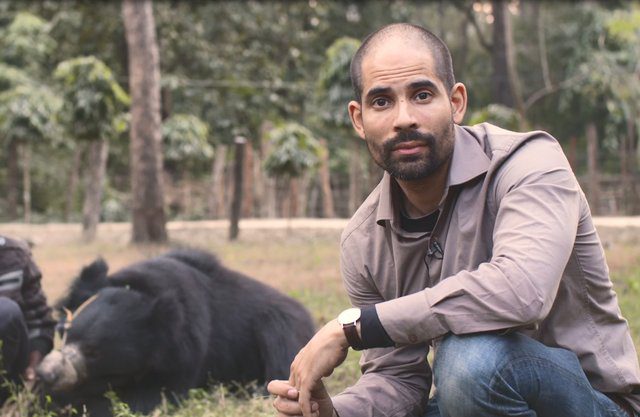 “There was elation when we all took that long, slow breath out in the 4×4 as we drove away from Parsa National Park, knowing that their lives had improved manifold from what they were,” D’Cruze said. “It was incredible.”