Home
animals
Husband Wasn’t Happy About Wife Bringing Home A Rescue Cat, So She Was Floored By The Bond That Developed…

The first time I ever saw Smoky, she was on fire. My three children and I had arrived at the dump outside our Arizona desert town to throw out the weekly trash. As we approached the pit, which was smouldering, we heard the most mournful cries of a cat entombed in the smoking rubble. 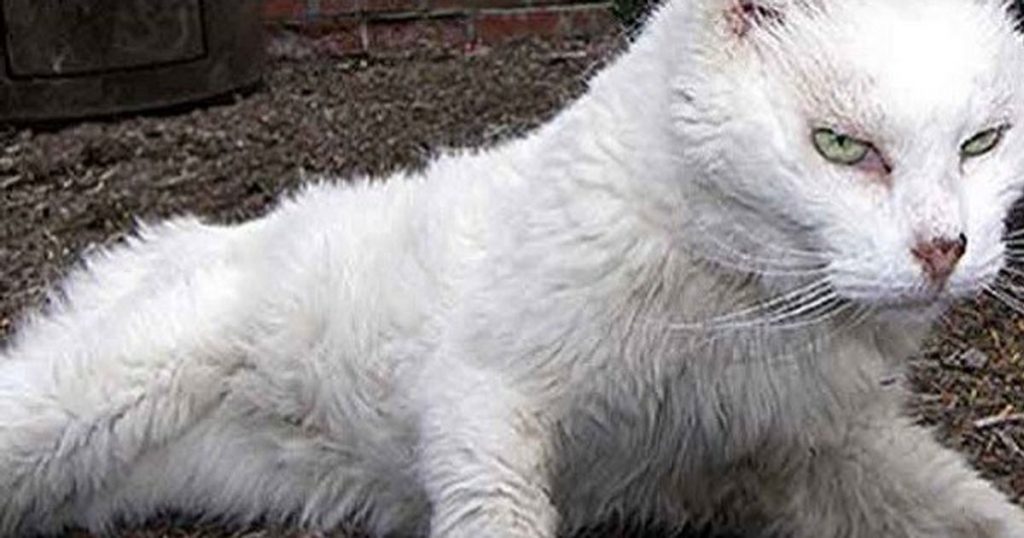 Suddenly a large cardboard box, which had been wired shut, burst into flames and exploded. With a long, piercing meow, the animal imprisoned within shot into the air like a flaming rocket and dropped into the ash-filled crater.
“Mommy, do something!” three-year-old Jaymee cried as she and Becky, six, leaned over the smoking hole.

“It can’t possibly be alive,” Scott, 16, said. But the ashes moved, and a tiny kitten, charred almost beyond recognition, miraculously struggled to the surface and crawled toward us in agony. “I’ll get her!” Scott yelled. As he wrapped the kitten in my bandanna, I wondered why it didn’t cry from the added pain. Later we learned we had heard its last meow only moments before.

Back at our ranch, we were doctoring the kitten when my husband, Bill, came in, weary from a long day of fence-mending. When he saw our patient, that familiar “Oh no, not again!” look crossed his face. This wasn’t the first time we had greeted him with an injured animal. Though Bill always grumbled, he couldn’t bear to see any living creature suffer. So he helped by building perches, pens and splints for the skunks, rabbits and birds we brought home. This was different, however. This was a cat. And Bill, very definitely, did not like cats.

What’s more, this was no ordinary cat. Where fur had been, blisters and a sticky black gum remained. Her ears were gone. Her tail was cooked to the bone. Gone were the claws that would have snatched some unsuspecting mouse. Gone were the little paw pads that would have left telltale tracks on our car. Nothing that resembled a cat was left—except for two huge cobalt-blue eyes begging for help. What could we do?

Suddenly I remembered our aloe vera plant, and its supposed healing power on burns. So we peeled the leaves, swathed the kitten in slimy aloe strips and gauze bandages, and placed her in Jaymee’s Easter basket. All we could see was her tiny face, like a butterfly waiting to emerge from a cocoon.

Her tongue was severely burned, and the inside of her mouth was so blistered that she couldn’t lap, so we fed her fluids with an eyedropper. After a while, she began eating by herself. We named her Smoky.

Three weeks later, we coated Smoky with a salve that turned her body a curious shade of green. Her tail dropped off. Not a hair remained. And the children and I adored her.

Bill didn’t. And Smoky despised him. The reason: Bill was a pipe smoker armed with matches and butane lighters. When he lit up, Smoky panicked, knocking over cups and lamps before fleeing into the open air duct in the spare bedroom.

In time, Smoky became more tolerant. She’d lie on the sofa and glare at Bill as he puffed away. One day he looked at me and chuckled, “Damn cat makes me feel guilty.”

As Smoky’s health improved, we marvelled at her patience with the girls, who dressed her in doll clothes and bonnets so the “no ears” wouldn’t show. Then they held her up to the mirror so she could see “how pretty” she was.

By the end of her first year, Smoky resembled a well-used welding glove. Scott was famous among his friends for owning the ugliest pet in the county—probably, the world.

Smoky longed to play outside where the sounds of birds, chickens and chipmunks tempted her. When it was time to feed our outdoor pets, including our Mexican wolf, the occasional skunks and assorted lizards, she sat inside, spellbound, with her nose pressed against the window. It was the barn cats, however, that caused her tiny body to tremble with eagerness. But since she had no claws for protection, we couldn’t let her go outside unwatched.

Occasionally we took Smoky on the porch when other animals weren’t around. If she was lucky an unsuspecting beetle or June bug would make the mistake of strolling across the concrete. Smoky would stalk, bat and toss the bug until it flipped onto its back, where, one hopes, it died of fright before she ate it.

Slowly, oddly, Bill became the one she cared for the most. And before long, I noticed a change in him. He rarely smoked in the house now, and one winter night, to my astonishment, I found him sitting in his chair with the leathery little cat curled up on his lap. Before I could comment, he mumbled a curt “She’s probably cold—no fur you know.” But Smoky, I reminded myself, liked being cold. Didn’t she sleep in front of air ducts and on the cold brick floor? Perhaps Bill was starting to like this strange-looking animal just a bit.

Not everyone shared our feelings for Smoky, especially those who had never seen her. Rumors reached a group of self-appointed animal protectors, and one day one of them arrived at our door.

“I’ve had numerous calls and letters,” the woman said. “All these dear souls are concerned about a poor little burned-up cat you have in your house. They say,” her voice dropped an octave, “she’s suffering.” Perhaps it should be put out of its misery?

I was furious. Bill was even more so. “Burned she was,” he said, “but suffering? Look for yourself.”

“Here kitty,” I called. No Smoky. “She’s probably hiding,” I said, but our guest didn’t answer. When I turned and looked at her, the woman’s skin was gray, her mouth hung open and two fingers pointed.

Magnified tenfold in all her naked splendor, Smoky glowered at the visitor from her hiding place behind our 150-gallon aquarium. The effect was awesome.

Instead of the “poor little burned-up suffering creature” the woman had expected to see, a veritable tyrannosaurus Smoky leered at her through the green aquatic maze. Her open jaws exposed saberlike fangs that glinted menacingly in the neon light. Moments later the woman was gone—smiling now, a little embarrassed and greatly relieved.

During Smoky’s second year, a miraculous thing happened. She began growing fur. Tiny white hairs, softer and finer than the down on a chick, gradually grew over three inches long, transforming our ugly little cat into a wispy puff of smoke.

Bill continued to enjoy her company, though the two made an incongruous pair—the big weather-worn rancher driving around with an unlit pipe clenched between his teeth, accompanied by the tiny white ball of fluff. When he got out of the truck to check the cattle, he left the air conditioner on for her comfort. Or he picked her up and held her against his denim jacket.

Smoky was three years old on the day she went with Bill to look for a missing calf. Searching for hours, he would leave the truck door open when he got out to look. The pastures were parched and crisp with dried grasses and tumbleweed. A storm loomed on the horizon, and still no calf. Discouraged, without thinking, Bill reached into his pocket for his lighter and spun the wheel. A spark shot to the ground and, in seconds, the weeds were on fire.
Frantic, Bill didn’t think about the cat. Only after the fire was under control and the calf found did he return home and remember. “Smoky!” he cried. “She must have jumped out of the truck! Did she come home?”
No. And we knew she’d never find her way home from two miles away. To make matters worse, it had started to rain—so hard we couldn’t go out to look for her.

Two weeks later Smoky still wasn’t home. We assumed she was dead by now, for the rainy season had begun, and the hawks, wolves and coyotes had families to feed.

Then came the biggest rainstorm our region had had in 50 years. By morning, flood waters stretched for miles, marooning wildlife and cattle on scattered islands of higher ground. Frightened rabbits, raccoons, squirrels and desert rats waited for the water to subside, while Bill and Scott waded knee-deep, carrying bawling calves back to their mamas and safety.

The girls and I were watching intently when suddenly Jaymee shouted, “Daddy! There’s a poor little rabbit over there. Can you get it?”

Bill waded to the spot where the animal lay, but when he reached out to help the tiny creature, it seemed to shrink back in fear. “I don’t believe it,” Bill cried. “It’s Smoky!” His voice broke. “Little Smoky!”

My eyes ached with tears when that pathetic little cat crawled into the outstretched hands of the man she had grown to love. He pressed her shivering body to his chest, talked to her softly and gently wiped the mud from her face. All the while her blue eyes fastened on his with unspoken understanding. He was forgiven.

Smoky came home again. The patience she showed us as we shampooed her astounded us. We fed her scrambled eggs and ice cream, and to our joy she seemed to get well.

But Smoky had never really been strong. One morning when she was barely four years old, we found her limp in Bill’s chair. Her heart had simply stopped.

As I wrapped her body in one of Bill’s red neckerchiefs and placed her in a child’s shoe box, I thought of the many things Smoky had taught us about trust, affection and struggling against the odds when everything says you can’t win. She reminded us that it’s not what’s outside that counts—it’s what’s inside, deep in our hearts.

That’s why Smoky will always be in my heart. And why, to me, she’ll always be the most beautiful cat in the world.

If this story touched your heart, do the same for someone else by clicking “Share” now!