Home
animals
Shelter Volunteers Could Not Convince Angry, Hissing Cat To Come Out Of Cardboard Box…

Charley is an adorable cat that lives in Knoxville, Tennessee. She was an older cat when she arrived there, and with her life experience, she knew exactly what she wanted. And what she wanted, was a forever home.

“Charley was brought in as a stray in November of 2016. Why her owners never looked for her, and let her go is something we’ll never understand,” said Courtney Kliman, from the Young-Williams Animal Center.

The cat was kept in her cage and was terrified. She would just stay in there until one day, a day where everything changed.

A man came into the shelter and began asking about Charley. He told the staff about what had recently happened. He had lost his mother and his cat in the same week. He was understandably upset, and he knew that a new furry friend would that would keep him the company would help fill the void in his heart.

A staff member went to go get Charley, who was 13 years old at the time, to introduce her to him, but she was scared, and just hissed while she was in her box. So, instead of making her even angrier, the staff member just picked up the box, and brought it into the visitation room. 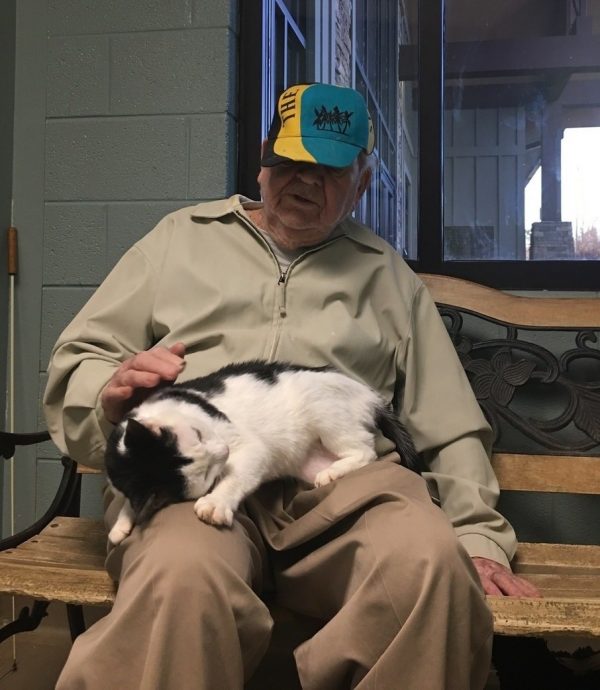 As soon as she set the box down, Charley hopped right out, and went right onto the older man’s lap, and did not want to leave his side.

According to the shelter staff, “It was the sweetest thing.” And after seeing this picture, we couldn’t agree more!

She began to rub her face on him, and just held him with her two front paws.

“It was the best thing ever to see him fall in love with Charley. Every time I would ask him a question, he would say, “I think she knows I’m taking her home. She’s mine,’” said the staff on Walter Bond, the man who adopted Charley.