A teenager named Naomi with post-traumatic stress disorder (PTSD) met Twinkie a training service dog and her life is already changing for the better.

Twinkie, a 1-year-old pittie, was adopted from a South Carolina shelter. She is now in training to be a PTSD service dog. Her job includes staying close to Naomi in crowds and leading her out of stressful situations. She also carries Naomi’s medication. 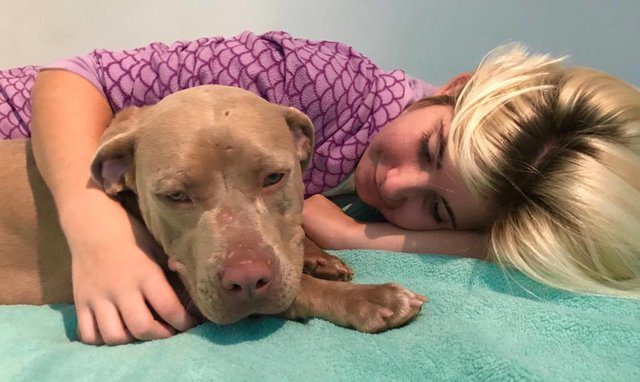 One of Twinkie’s most important duties will be to snuggle up close when Naomi is experiencing a panic attack or anxiety.

“It is actually very impressive how Twinkie runs to Naomi and starts laying on her when she sees her laying down and hears her crying,” Gudrun Kaiser, a dog trainer said. 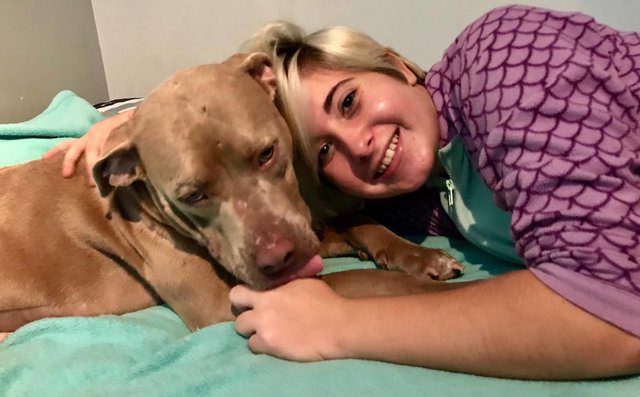 Gosdin said that Naomi stopped participating in activities she previously loved, like kayaking and surfing and became isolated.

“Naomi felt lonely and closed off inside. She had trouble expressing her feelings and felt fearful, judged and pushed around by many,” Gosdin said. “She was extremely insecure and it started to affect every aspect of her life.”

But Naomi has always felt a special kinship with animals, and the family looked into whether a specially-trained service dog could join their household.  Their home already included two other dogs, a cat, and a snake.

The cost for an already-trained dog was prohibitive and can run into tens of thousands of dollars. Kaiser, a dear family friend, knew that she could train a shelter dog for virtually no money with just as good results.

“It is one of the favorite parts in my line of work as a professional dog trainer, to find a rescue service dog for someone and train them with the person together,” Kaiser said. 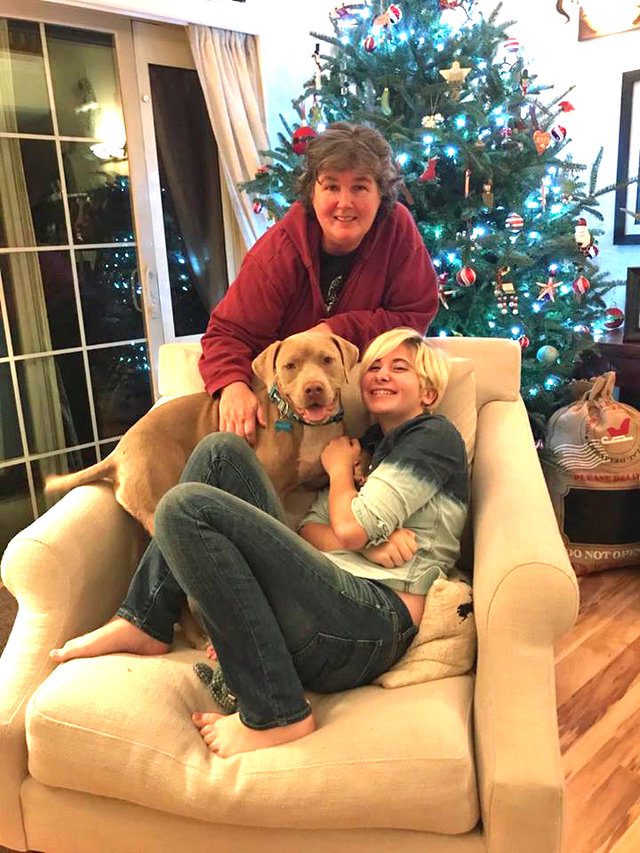 Kaiser works with local shelters, doing temperament testing of their dogs. She began letting people know she was looking for a dog with some specific characteristics: The dog should be friendly, good with people and other dogs, and “eager to please, liked to be touched, loves affection, doesn’t startle with loud noises, not afraid of strangers or groups of people,” Kaiser said.

Naomi put in her request: that the dog is large enough to really hug.

Beaufort County Animal Shelter had a couple of good prospects. In late September, Kaiser and her business partner met the dogs and neither seemed like a perfect fit.

“While we were ready to leave, the staff was insisting that I would look at another dog, a 10-month-old pitbull girl named Penny,” she said.

Penny was found as a scar-covered, emaciated stray after Hurricane Irma. Her background didn’t give Kaiser pause, but the trainer did have reservations about Naomi having a pit bull as a service dog.

Kaiser worried that having a pit bull could draw negative attention to Naomi but those concerns slipped away when Kaiser met Penny at the shelter.

“She sat right in front of me and put her head in my hand and that was it. She kept wagging her tail like crazy and passed the temperament test with flying colors,” Kaiser said. 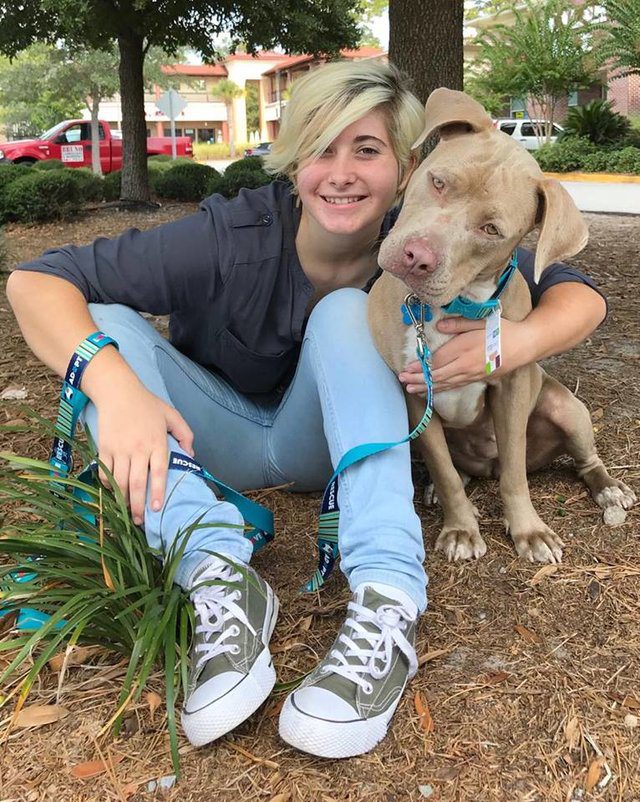 Kaiser brought the dog to the Gosdins’ home and she fit in right away.

“The first thing we remember seeing was that wiggle butt,” Gosdin said. “[She] showered us with love the moment she arrived. And all of us realized the change that started, that day, in our daughter’s behavior.”

Naomi renamed her new dog Twinkie. “And she thought a name like Twinkie could bring awareness to the fact that she is sweet on the outside but even sweeter on the inside,” Gosdin said. 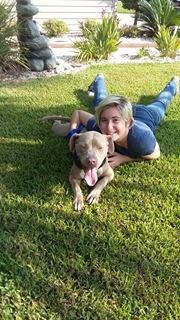 Naomi and Twinkie have been inseparable ever since. 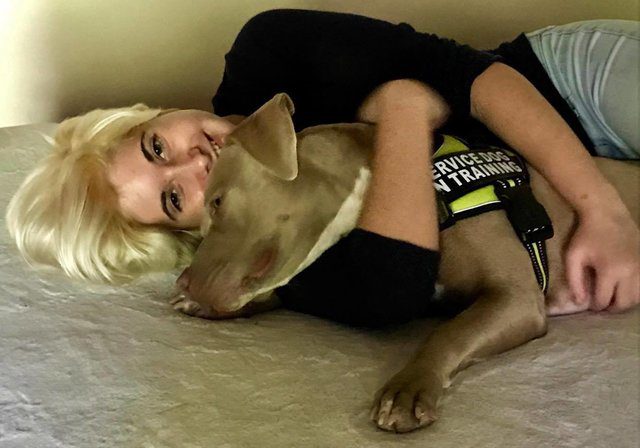 Kaiser works with the two every week. They do bonding exercises and practice basic commands like sit and stay.

Twinkie learned the “cuddle” command as her first trained task. 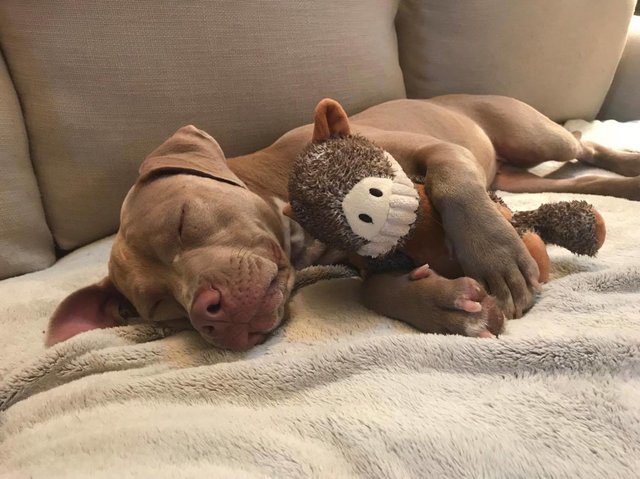 Gosdin already sees a big change in her daughter.

“Once Naomi adopted Twinkie, her confidence shot through the roof. One day she came home and told us she found herself talking to other students. And of course, Twinkie was the subject matter. She told us she felt like a proud bragging mom,” Gosdin said. “After months of isolation that was truly incredible. Her happiness and joy regarding the little things of life returned.” 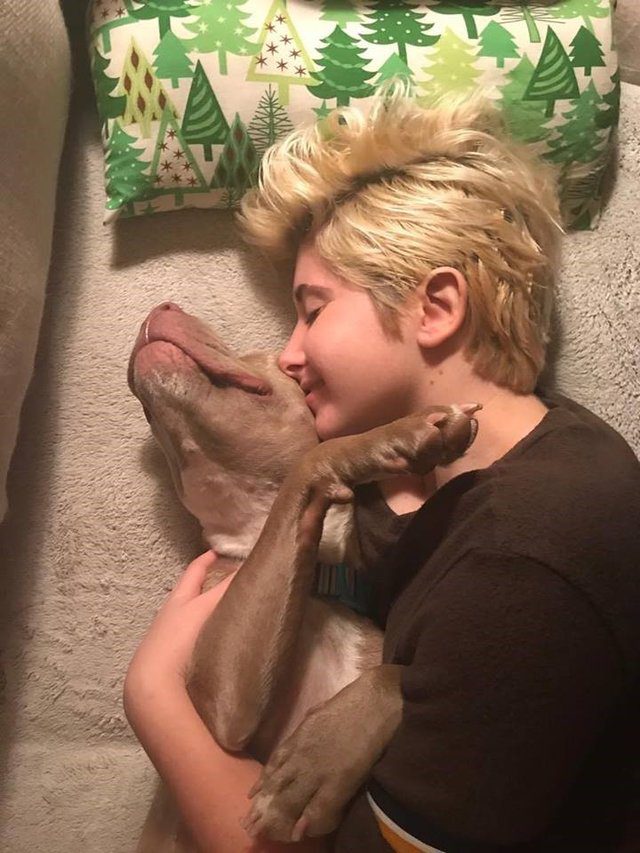 Kaiser wants to shine a light on the positive role that shelter dogs, pit bulls in particular, can play in a person’s life. She hopes that others who need and train service dogs will consider a dog like Twinkie.

“What could be better than [when] a shelter dog, who might have faced euthanasia, is saving a human’s life by becoming their service dog?” Kaiser said. “This is a win-win situation for anybody involved.”

“From the moment Naomi saw Twinkie she loved her for what she was, regardless of her past or looks. And Naomi, if I may add, turned out to be the best mom, friend and protector Twinkie could ever have,” Gosdin said.

Gosdin relayed something very moving that Naomi said about Twinkie: “All the scars on her body are my scars too. She has taught me never to give up, but bear the scars without looking back. And healing, Mom, healing — that is what we are learning to do.”