Coyotes are known for being sneaky — even wily, if you will.

Normally, that sneakiness and elusiveness benefits these creatures. They can slink around in woods, neighborhoods, and even cities, nab some food, and get to a safe space all without being seen, which keeps them safe from larger animals, especially humans.

But sometimes, that natural inclination toward sneakiness can be dangerous, even fatal.

That was the danger in the case of a little coyote spotted on a golf course in Ottawa, Canada.

He was injured, likely having been hit by a car, and was also suffering from sarcoptic mange, a skin parasite that causes the fur to fall out and often results in death. In this coyote’s case, the lack of fur was especially dangerous in the Canadian winter.

Coyotes are definitely not domestic animals, and can be dangerous to pets and children. Normally, they should be left alone or handled only by professionals. But while they’re known for their craftiness and trickiness, they can also surprise us with their sweetness.

And sometimes they really do need some help, even if they don’t realize it.

Concerned humans called animal control when they saw the injured, sick coyote, and (humane) traps were set in order to bring the animal to get some help.

However, fear and instinct kicked in and the coyote continued to elude the rescuers. They were worried, because the longer the coyote stayed out in the cold, the lower his chances of survival became. 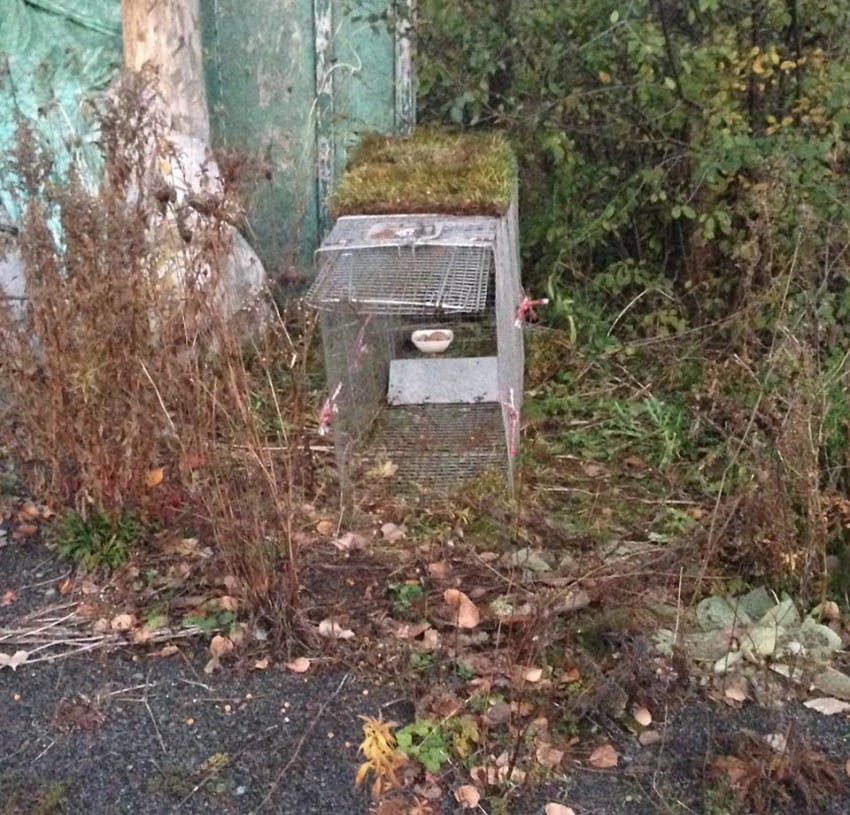 In early November, residents of Ottawa, Canada, spotted a sick and injured coyote near a golf course.

Concerned that its mange and injuries would prove fatal in the harsh Canadian winter, they called animal control, which started setting traps for the coyote.

But the coyote — alone, afraid, and desperate to survive — continued to elude them. He didn’t know that the humans were actually trying to help. He was finally caught on November 21, and the rescuers saw that he was in a very bad way.

He had a broken pelvis, probably from being hit by a car, and his coat was almost entirely gone from the mange, putting him at risk not only of infection but also of freezing to death in winter. Normally, a thick coat of fur keeps coyotes warm, but this one was nearly bald. 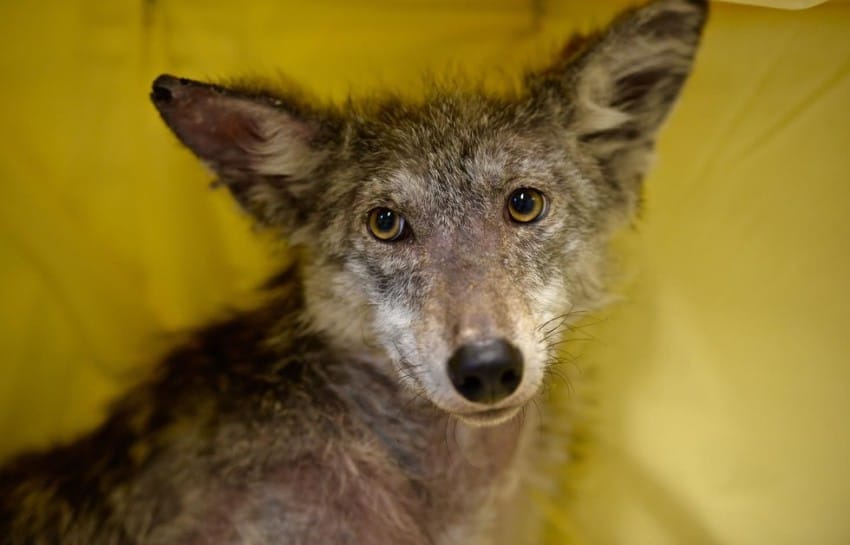 “He was in really rough shape when he first came to us,” said Sarah Beauregard, the animal-care coordinator at Rideau Valley Wildlife Sanctuary. “We didn’t think he would make it through the first night.” 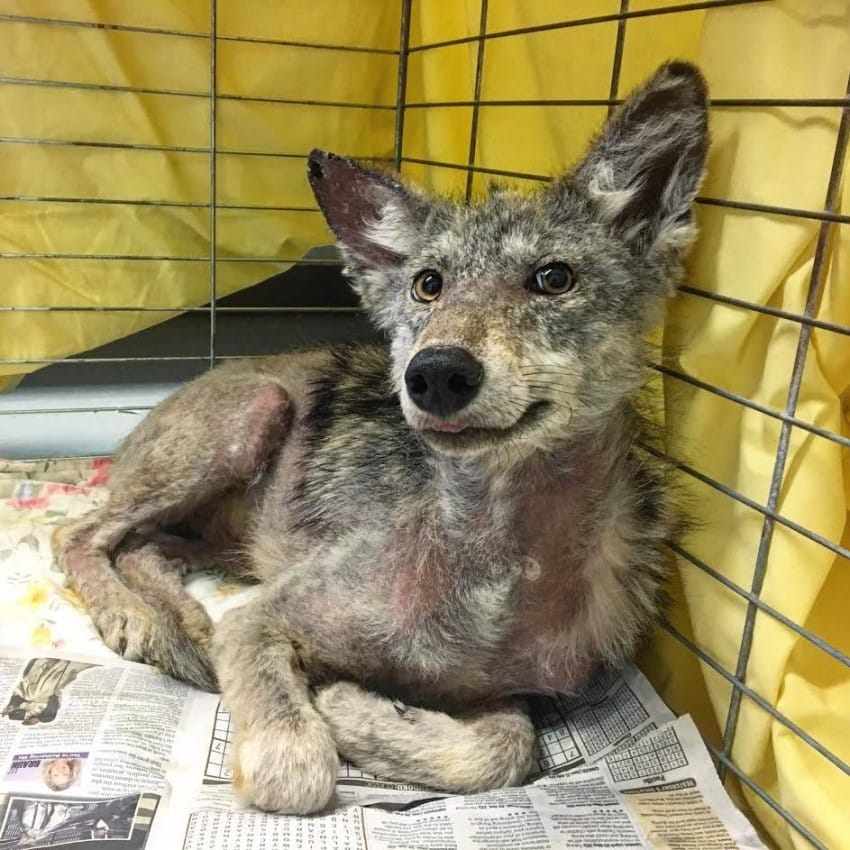 But they could see that the coyote, despite his initial fear, knew he was in a safe place. Just look at his smile!

“The thing that really gets me is his eyes,” Beauregard said. “Even when he was at his worst, there was a brightness and hopefulness about them.” 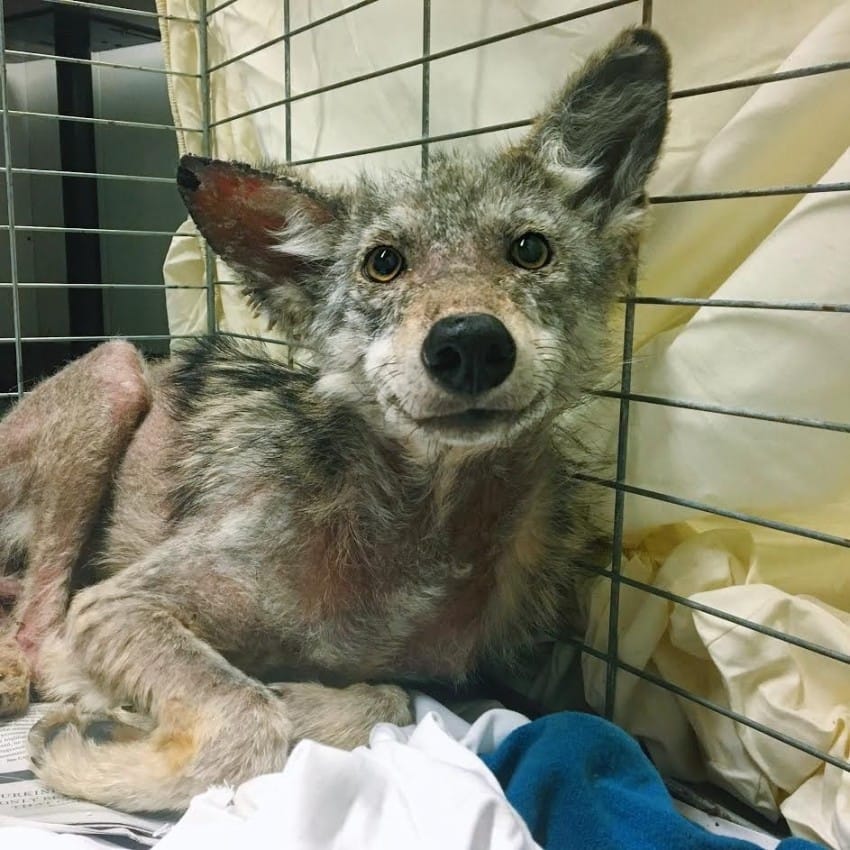 The coyote was treated for broken bones and mange. Gradually, he began to feel more at ease at the sanctuary, and started warming up.

“He is a sweetheart,” Beauregard said. “Coyotes are shy and timid by nature, but he seems to trust us and know that we are trying to help him.” Rideau Valley Wildlife Sanctuary will keep the coyote until he’s recovered and strong enough to be returned to the wild.

And despite how cute and inviting that smile is, they’re doing their best to keep human contact to a minimum.

Otherwise, the coyote could become too comfortable around humans, which could potentially put him in danger in the future.

A little skittishness when it comes to wild animals is a good thing! 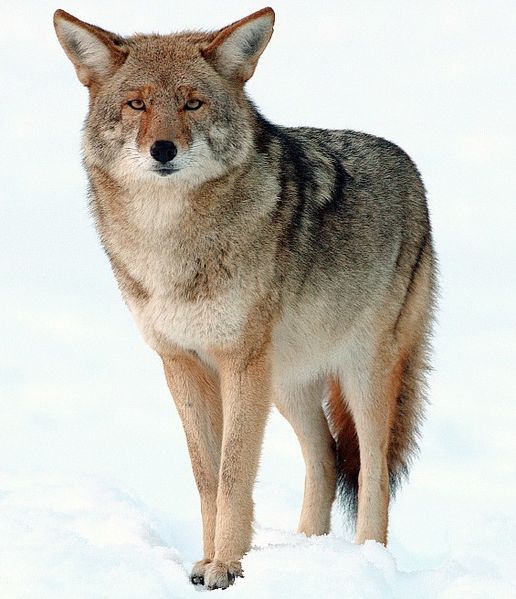 The rescuers at Rideau Valley also want to remind people not to feed coyotes or encourage them to come close to them or their home, no matter how cute the animals might be.

If you see one that looks sick or injured, call your local animal control immediately.

You can also help coyotes and other wild creatures from afar by donating, and by signing petitions to stop the killing of coyotes for their fur.

You can also check out all the other animals Rideau Valley has rescued on their website and Facebook page.