Marília and Matheus planned to tie the knot outside. But the couple from Brazil was so disappointed after a heavy storm changed their plans at the last minute.

As the heavy rains began to fall, the couple was forced to move the soggy ceremony inside.

As the guests took their seats, a stray dog with muddy paws suddenly appeared out of nowhere. Wedding staff tried to shoo the dog away, and the groomsmen carried him back outside.

Marília and Matheus continued with their ceremony, but, much to everyone’s surprise, the stray dog returned as the bridal chorus began to play!

Again, the dog was coaxed back outside into the rain. But as the couple said their vows, the lonely dog returned yet again.

This time, things went a bit differently. In fact, it changed Marília and Matheus’ lives forever.

Felipe Paludetto, who has been a professional photographer for seven years, was on hand to capture the incredible and unexpected turn of events that followed… 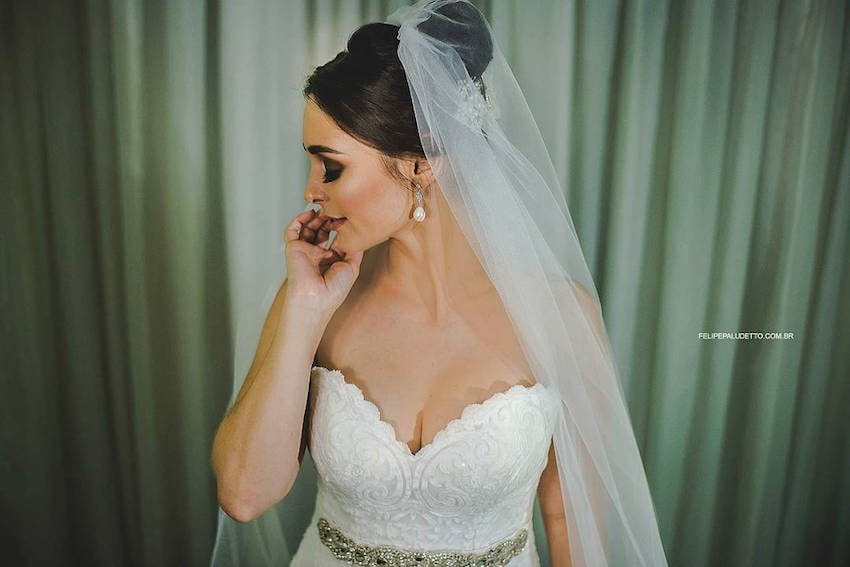 The couple from São Paulo wanted their wedding to take place outside… but not everything goes as planned. 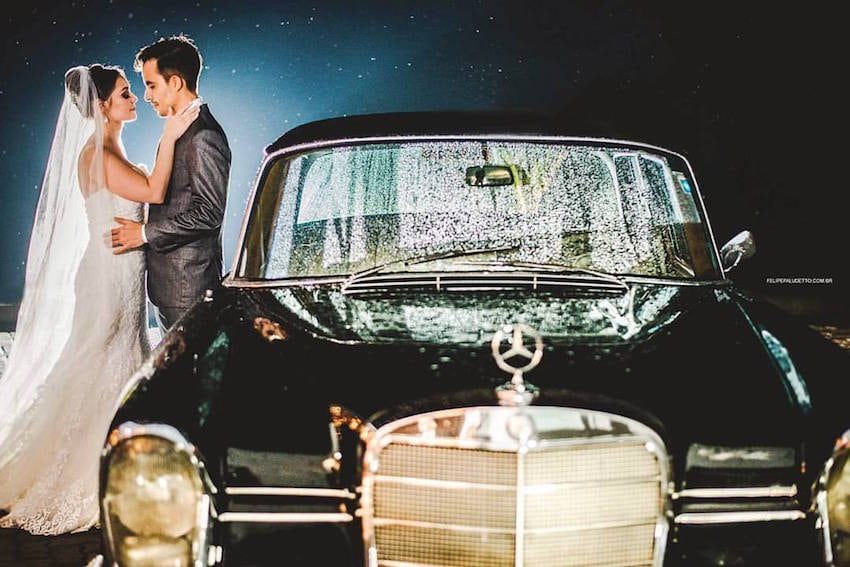 On the day of their wedding, a rainstorm ruined the couple’s plans. They ended up having to hold the ceremony under a plastic tent.

The wind and rain whipped around them, and the guests could sense the tension in the air.

But the officiant said that although everything seemed to be going “wrong,” the most important thing was love.

This sentiment was about to prove truer than anyone could have imagined. 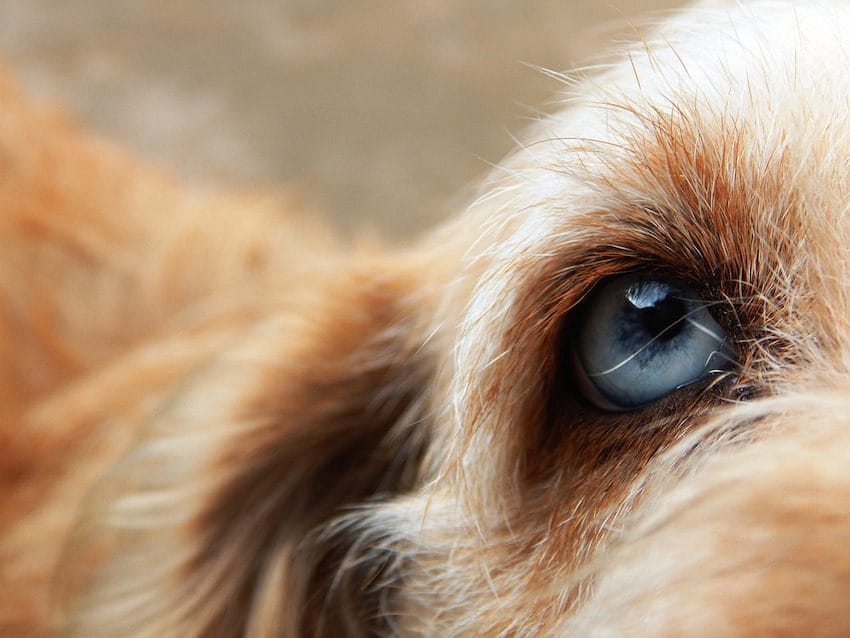 Just as the guests took their seats and Marília and Matheus prepared to say their vows, a street dog wandered in from the rain. He was wet, and his paws were covered in mud.

But this was a closed event, and people tried to shoo the dog away.

The dog, who would soon come to be known as Snoop, didn’t want to leave. His presence even caused an argument between annoyed wedding vendors! 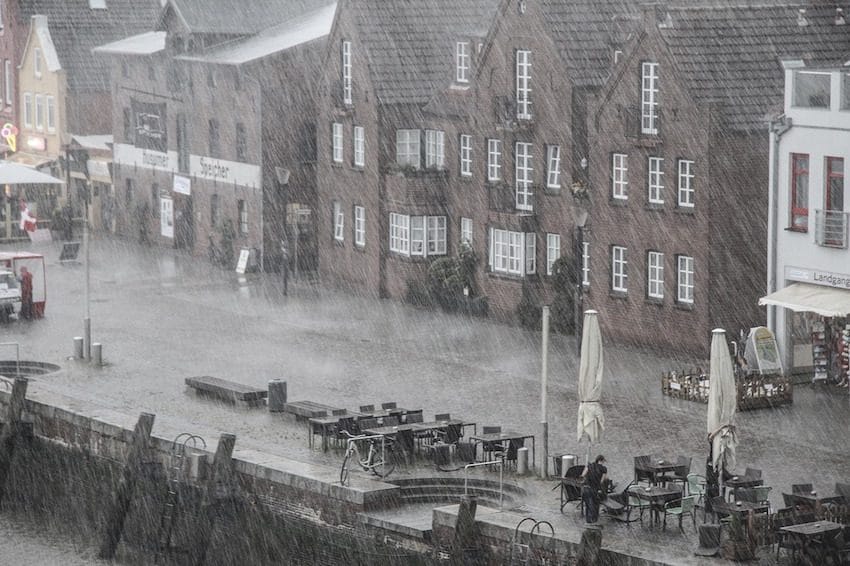 Eventually, three groomsmen carried Snoop out of the room.

Back outside he went, with the rain still pouring down. 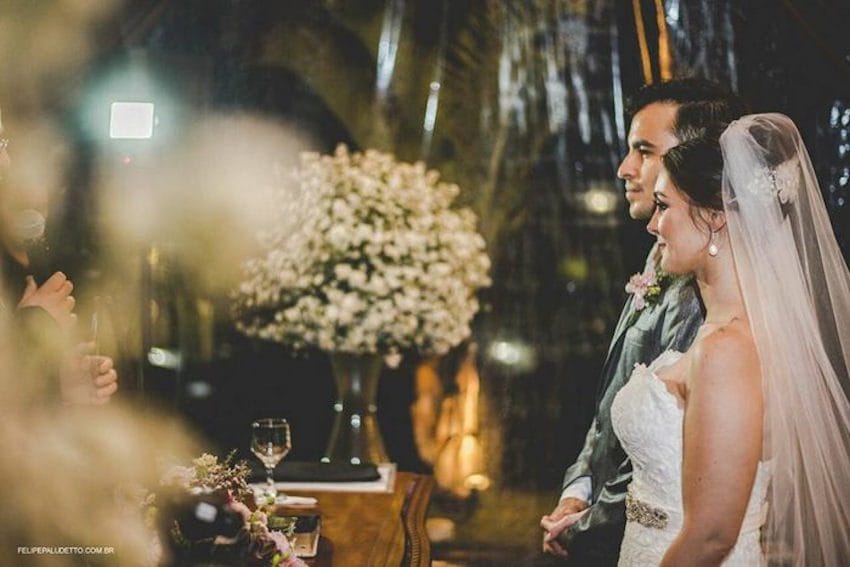 The ceremony began. But as the bridal chorus began to play, in walked Snoop!

The wedding guests and staff brought the pup back outside a second time. 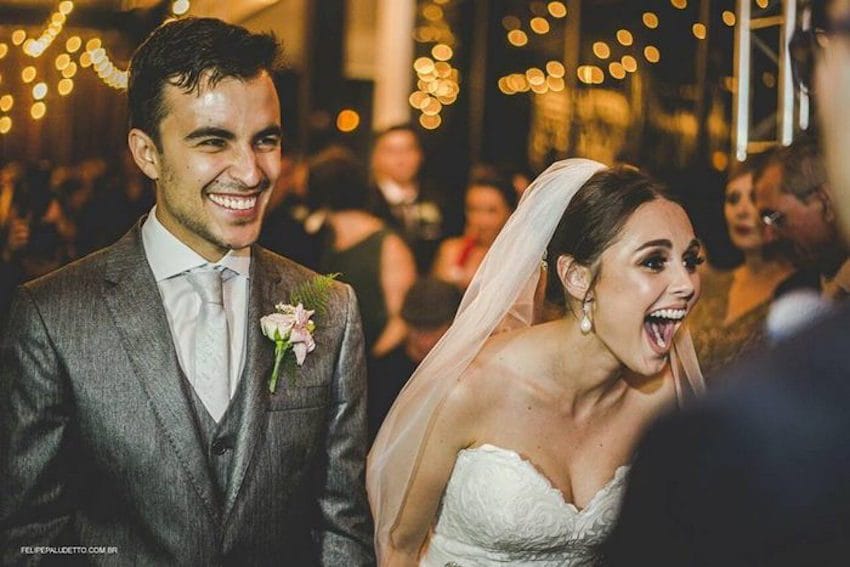 But as Marília and Matheus read their vows, Snoop returned. 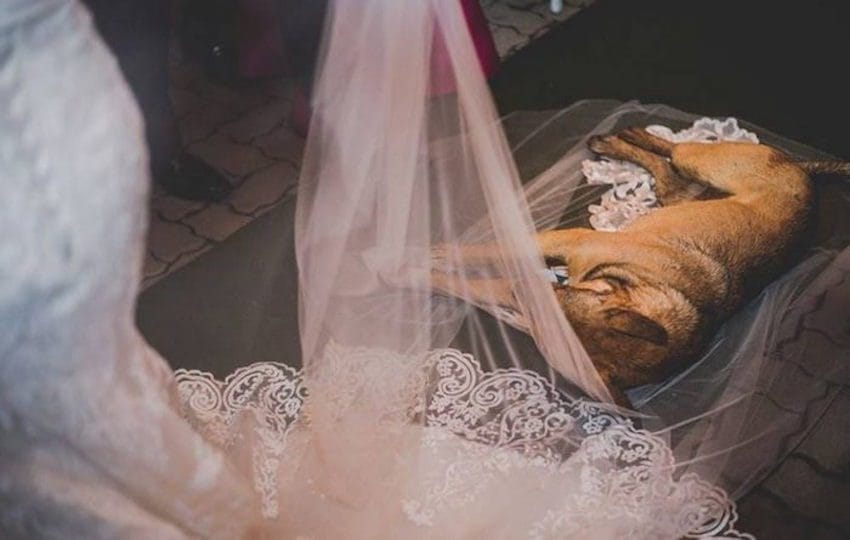 The cold, wet and lonely dog lay down to take a nap on Marília’s beautiful white lace train.

Only this time, Snoop had won everyone over. They couldn’t bear to see him shuffled out into the rain again… especially Marília, who loves animals and didn’t mind him resting on her dress. The rain finally stopped, and Snoop was allowed to stay for the rest of the wedding. 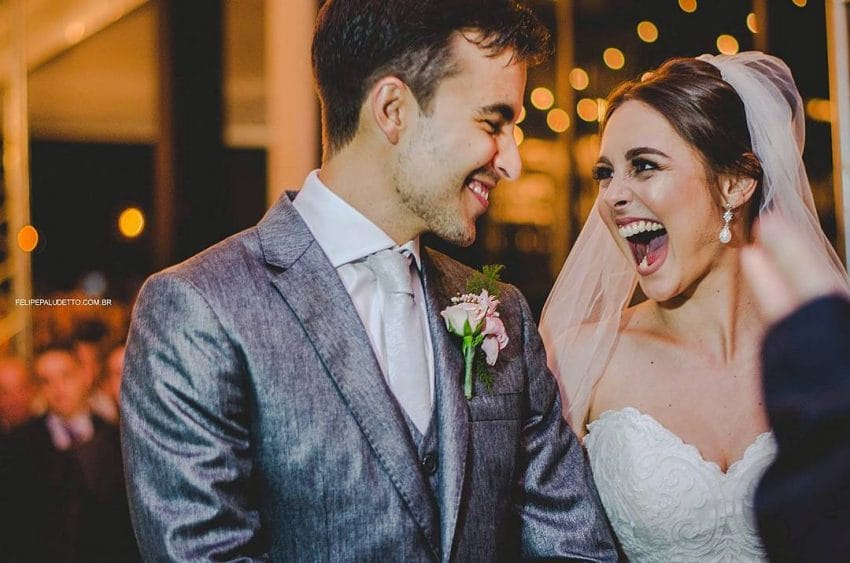 As the night came to an end, Marília and Matheus searched everywhere for Snoop.

They were so disappointed to find he had slipped away and disappeared into the night.

But their story was far from over. 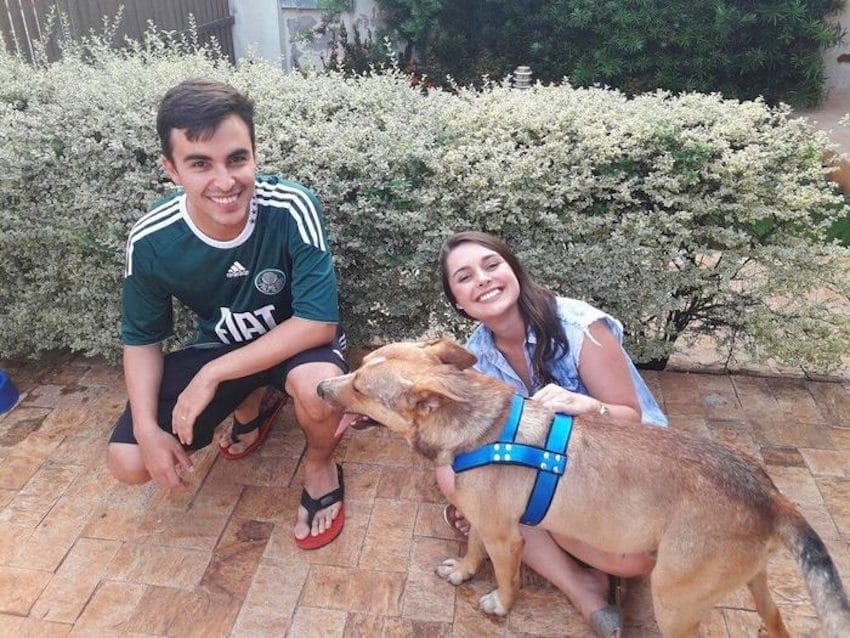 That night, Marília and Matheus decided to track Snoop down.

They couldn’t stop thinking about their unexpected wedding guest.

One week went by, and they never gave up their search for the street dog. For the first time in a while, Snoop was cleaned, fed, and given all the love and care he so desperately needed. The newlyweds were contacted by someone who knew where they could find him… and they did! 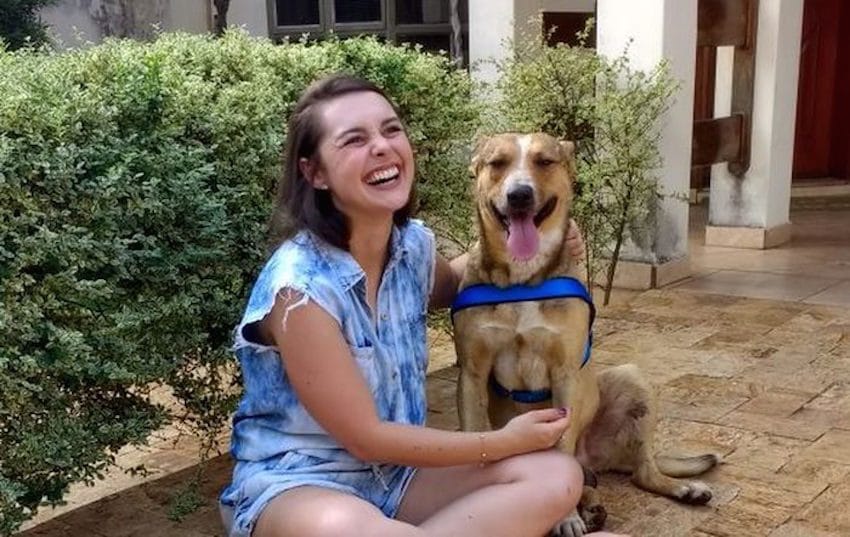 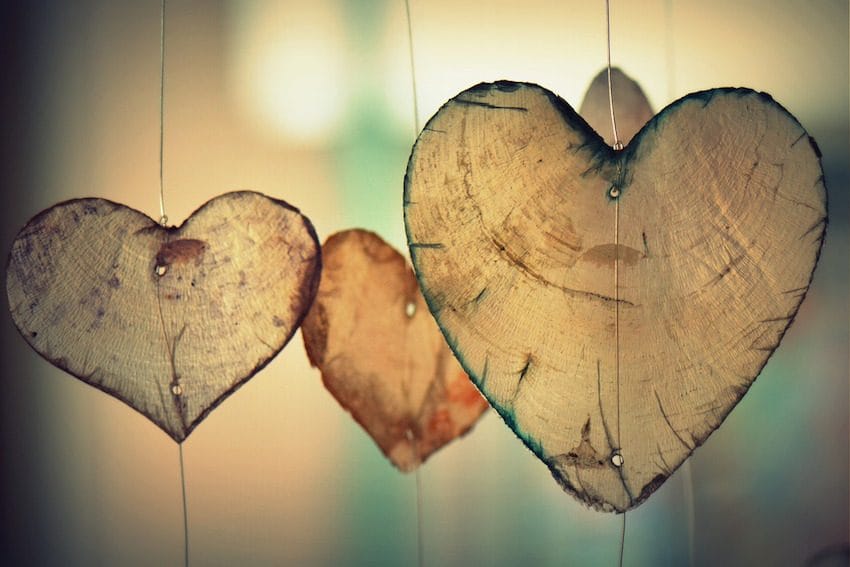 Their wedding day may not have gone as planned, but now, the grateful newlyweds have a family of three to show for it.