Susie Coston first approached the barn and opened up the barn where the stench was so foul it made her eyes burn. Only a small patch of light was shining through the open door, countless pairs of fearful eyes peered back at her. She turned on her flashlight and walked inside. 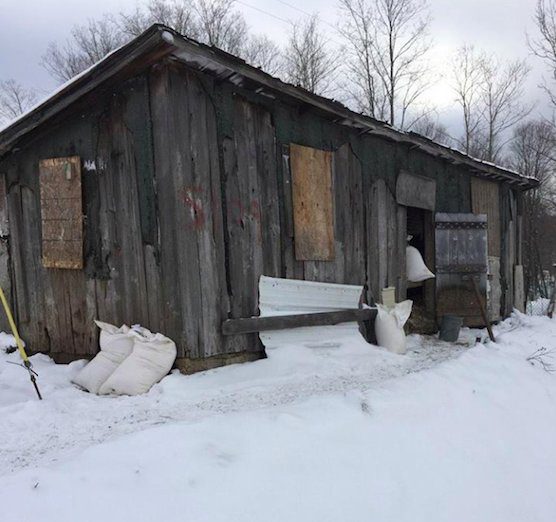 She was horrified by the sight of ribs and spines showing through the mange-ridden skin on a herd of pigs. The poor animals were crowded in the small structure, standing on a years’ worth of their own feces. Some of the pigs were crammed into small wire cages and had no room to move, while tiny piglets were scattered among the adults, getting stepped on and injured. Most of the pigs could not stop coughing. 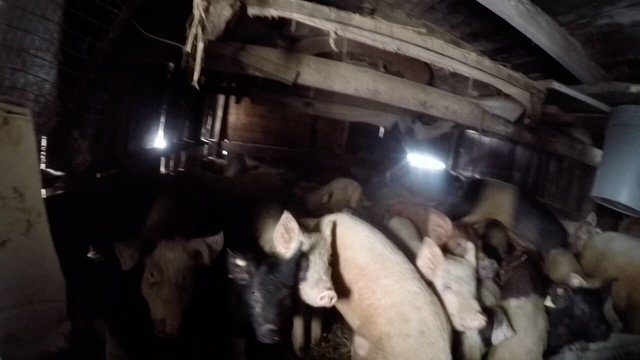 “I couldn’t stand to be inside for even a few minutes,” Coston, national shelter director of Farm Sanctuary said. “I cannot imagine what it was like to live in there. They had spent their whole lives in total darkness.”

Many of the pigs weighed half of what they normally should, while others had deformed limbs or injured hooves. 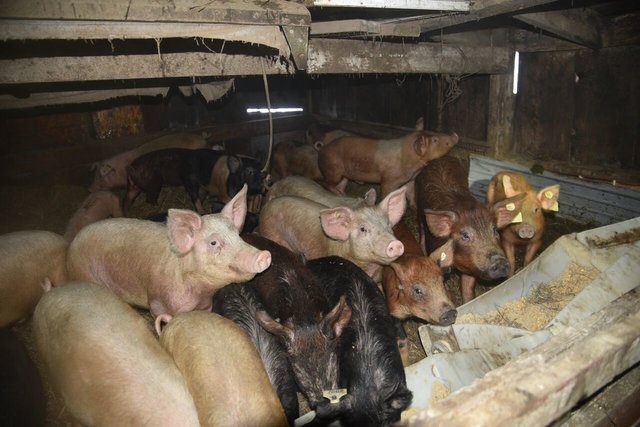 Coston and the Farm Sanctuary rescue team opened many barns and sheds on the New York property during the rescue. Every discovery was just as harrowing as the last. The final count was 85 pigs living in similar conditions across the multiple enclosures.

One of the herds lived outside and had a small trailer as their only shelter. A lot the females were pregnant, and it was unclear how many piglets had succumbed to the cold prior to the rescuers arriving. 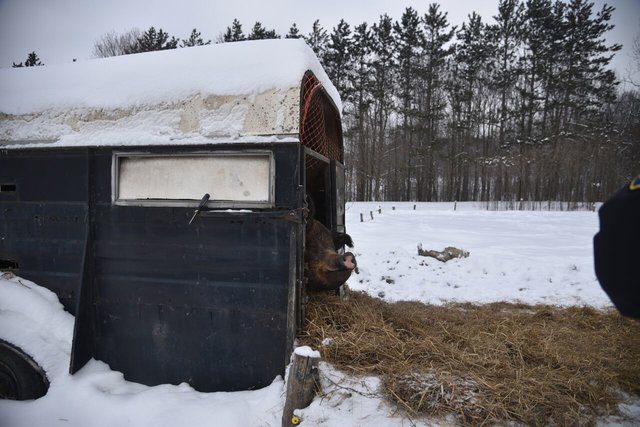 “They had the worst mange, and also had frostbite,” Coston said. “A small one already had part of their ear falling off.”

The rescue first identified the pigs with the direst health conditions. Coston and the rescue team loaded 24 grown pigs and newborn piglets into their vans for emergency veterinary care. Four sickly chickens were also taken in. 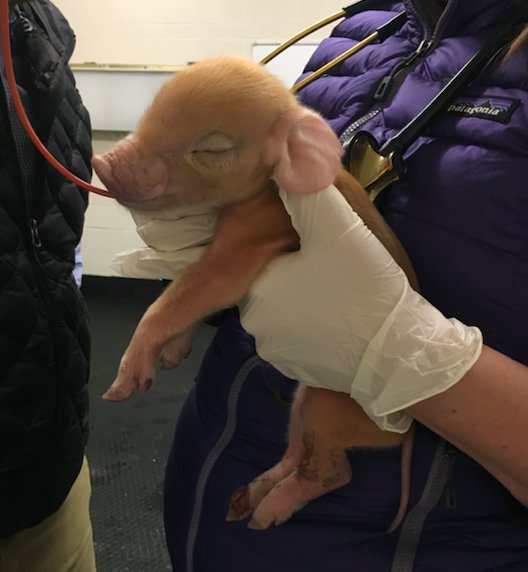 The rescue was not sure why the animals were being kept, but Coston said it’s likely they were being raised for food.

Some of the animals were taken to Farm Sanctuary’s Watkins Glen campus, while the more severe cases went to Cornell Veterinary Hospital so they would have round-the-clock care. The pigs were all suffering from pneumonia, and many had very advanced cases of worms and mange. 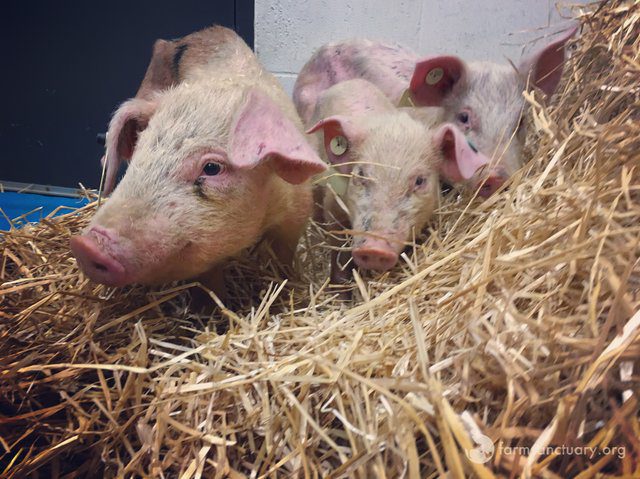 “The mange on a large number of the pigs is so bad that the tissue in the ears is dead, smells rotten and is very painful and itchy,” Coston said. “All are terrified, with exception of the newborns who have the bravest mother I know. Mom is more angry than scared right now.” 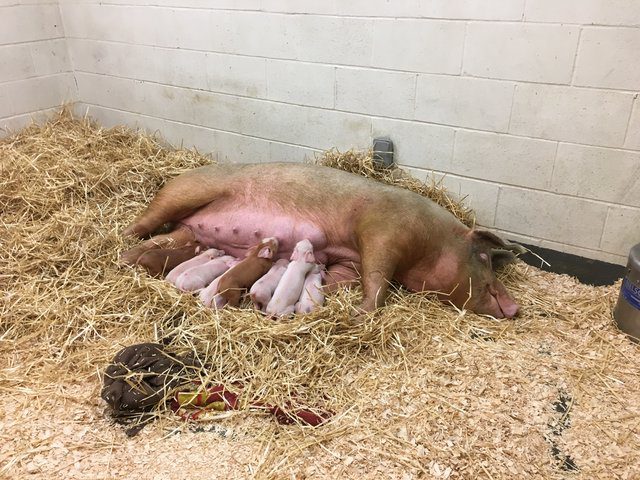 The SPCA has seized the additional animals from the property, in addition to the 24 pigs rescued by Farm Sanctuary. Both organizations are closely monitoring the pigs and have been treating them for their many ailments.

“For many of them, starvation and dehydration are the greatest threats to their survival,” Coston said. “I have never seen pigs drink the way these did when we got them to safety. It was like they had never had any real access to water.” The piglets are adjusting well, but many of the older pigs are fearful of their new environment. They have lived in the dark and had little to no human interaction. The day they were rescued Coston said it was clear they were attached to one another, especially the siblings.

“When I went to get them out the others in their pen, eight of them, some clearly siblings, were piling on top of each other to protect each other,” Coston said. “The one on top was biting at me. The largest one had deformed front legs, but was trying to block [me from] the smaller ones.” 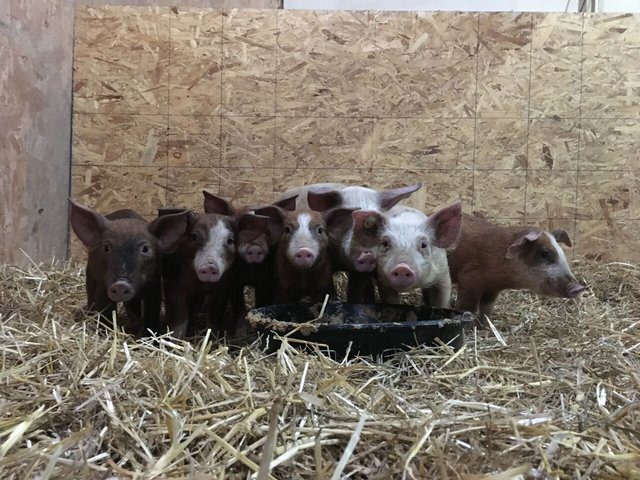 The owner of the property has been arrested, and this was not the first time the sanctuary has been called to rescue animals from the same farm.

Local SPCA officers arrived at the property in 2003 to follow up on a complaint. They found over 100 pigs living outdoors with no food or shelter. Most were suffering from frostbite or were frozen to the ground, Coston said. Jerry Nason, the owner, was sentenced to three years probation and was barred from owning any animals during that time span.

“Just looking at these pigs makes me angry that anyone would ever treat a living animal this way,” Coston added. “But to think that their abuser has done this before is infuriating.” 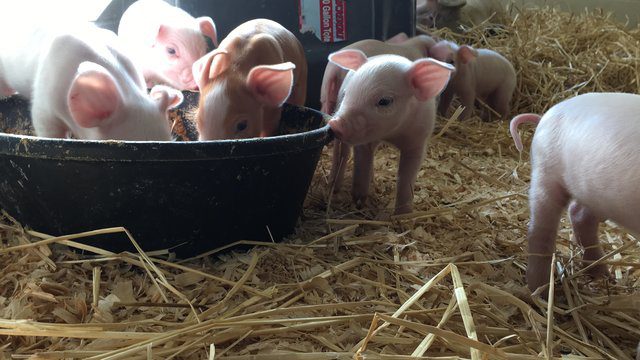 Formal charges for Nason are underway, Farm Sanctuary will continue working to help local law enforcement with the investigation.

“Our goal right now is to get these pigs healthy,” Coston said. “Then they will be able to be adopted into vegan or vegetarian homes as companions.”