Bunny, a tiny kitten arrived at a Las Vegas shelter with a terrible case of ringworm they decided she wasn’t adoptable. Staffers said they would only release her to a rescue that could handle the intensive care she needed.

Because no rescue was willing to take her on, the shelter decided to euthanize her. However, a woman with a lot of foster experience stepped in and pulled Bunny herself, determined to save the sick kitten’s life. 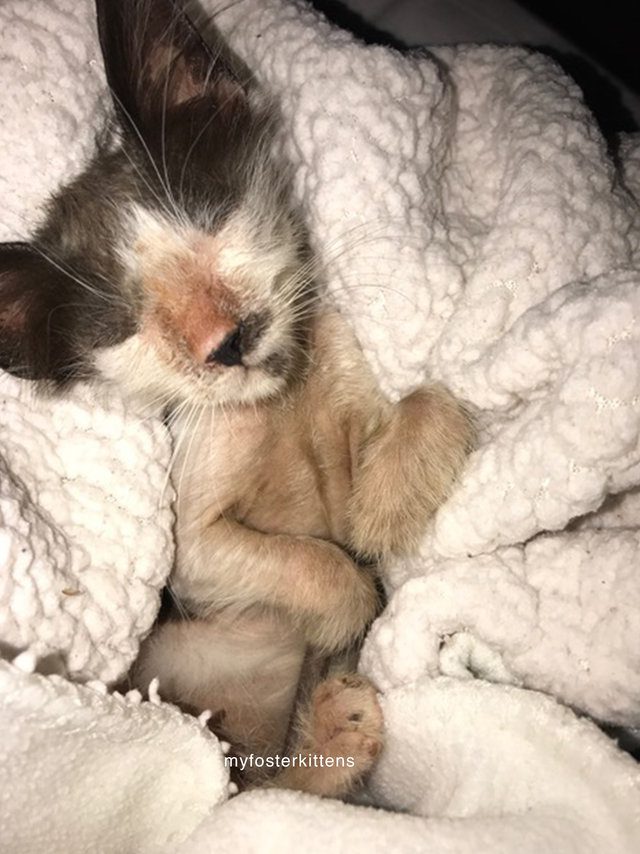 When Nikki Martinez heard about sweet little Bunny she knew she deserved a chance. Once Nikki got the kitten home, she realized just how sick Bunny really was, and was worried the tiny kitten might not make it.

“She was underweight, missing hair and urinating blood,” Martinez said. “At one point she was so frail, I was scared to check in on her the following morning because I didn’t know if she would still be alive.” 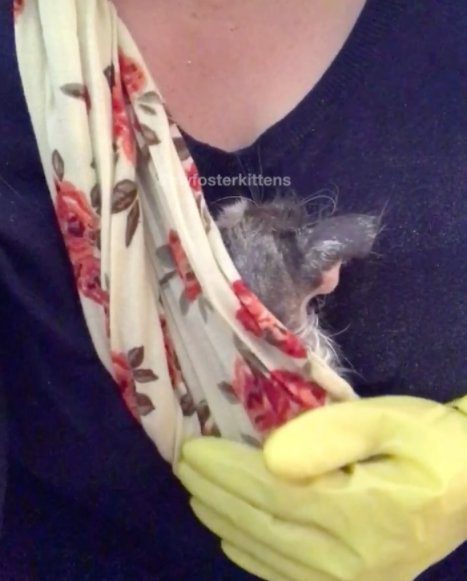 Bunny miraculously, survived her first few days in foster care, and then it seemed as though she might be out of the woods. She began to heal, but couldn’t really be left alone, so Nikki found a way to always be with her. 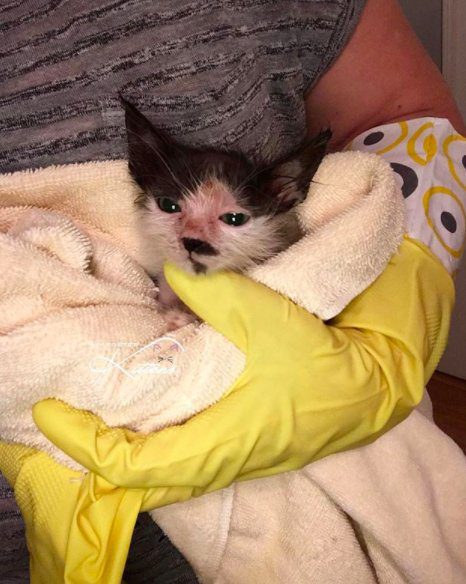 “She had to be isolated from my resident pets and other fosters so she was with me the majority of the time,” Martinez said. “I had shirts with giant pockets in the front and she would hang out in the pocket/pouch. I’d take her everywhere I went so she wouldn’t be alone. Doing household chores, walking the dogs, going to the store — she went everywhere with me.” 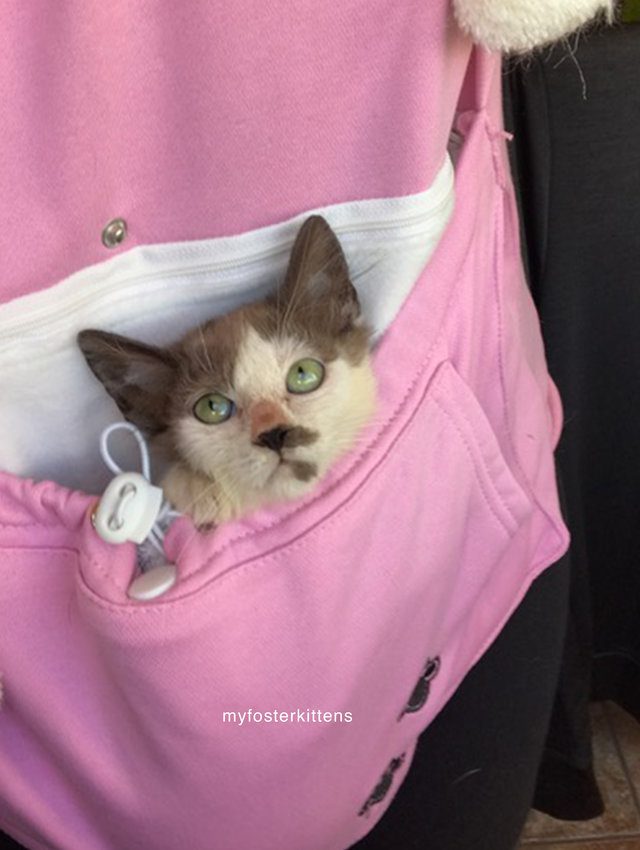 Bunny got stronger and stronger, as the weeks went on and it seemed her ringworm infection was almost over. Her personality began to shine through and she was almost ready to go off to her forever home. Nikki knew that finding the right family might not be easy. Amazingly enough, Bunny did find a loving family to adopt her, despite her history of ringworm and despite the fact that she was still a bit bald. They could see that there was something special about the little kitten right off the bat.

“Bunny appeared on my Instagram … during the holiday of 2016-17,” Marija Jennings, Bunny’s new mom said. “I started following Nikki and immediately unfollowed because I didn’t think Bunny was going to make it and it was too painful to watch her suffer. But photos of her kept coming up … and at that point, Jack [my partner] and I fell in love with her and became emotionally invested in her recovery.” 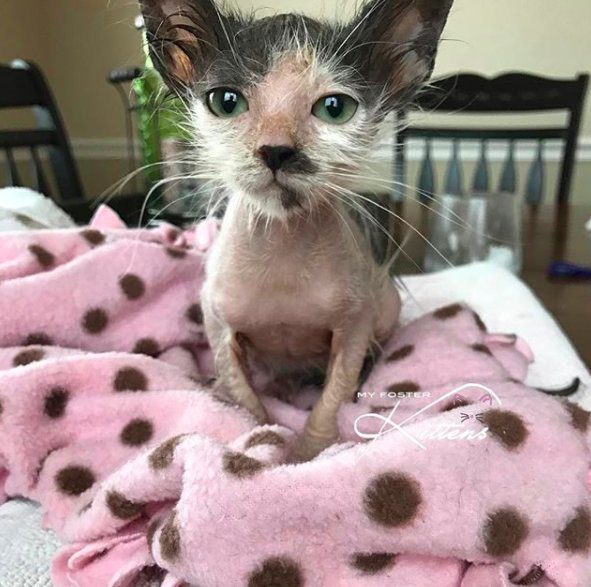 Bunny would be happy and safe with the couple, who already had two cats,. After nine weeks of foster care, Bunny finally went off to her forever home.

“Not only did they adopt her, but they agreed to take over her fungal treatment,” Martinez said. “I couldn’t have found a more loving, dedicated family to adopt her.” 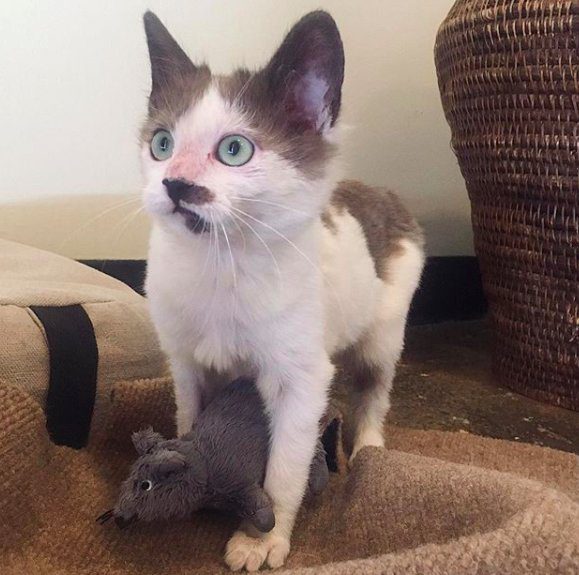 The couple welcomed Bunny into their family and continued to oversee her recovery. They thought that her ringworm was essentially gone, but quickly realized that she had a much more aggressive case than anyone realized. Bunny has a very long road to recovery ahead of her.

“At that point, she had contaminated us and our other cats, and pretty much everyone we know,” Jennings said. “As Bunny got older, the treatments became more and more traumatizing and uncomfortable, but Bunny was able to take it in stride.” 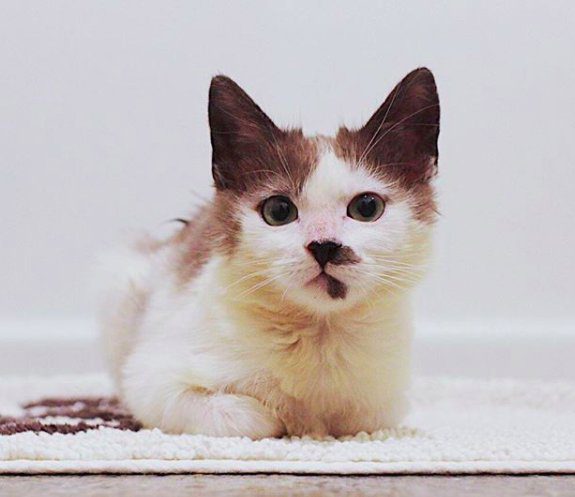 Bunny’s hair had grown back and she was feeling better, so the severity of her condition wasn’t obvious. Never once did her new parents regret adopting her. They did everything they could to help her heal. They were determined to help her lead a completely normal life because she was a member of their family by that time. 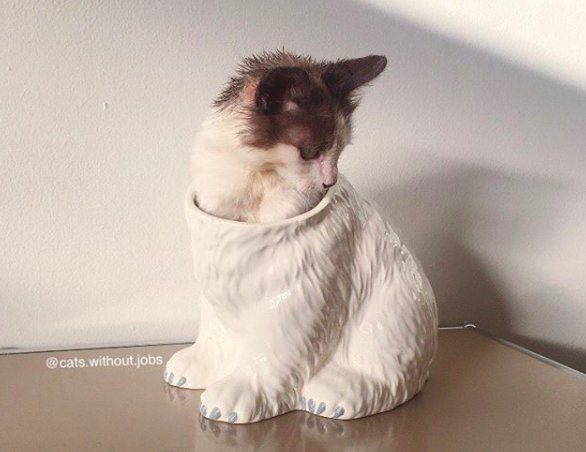 “It took bi-weekly baths, antifungal medication and decontaminating our apartment from floor to ceiling every week; even then the progress that we made was not very encouraging,” Jennings said. “After a few months of no progress, our ringworm case had become so legendary that our vet enlisted the help of specialists, and they held weekly meetings to discuss how to proceed.”

Finally, the vets prescribed Bunny a new type of medication — and it worked! After nine months of treatment, Bunny was finally completely healed. 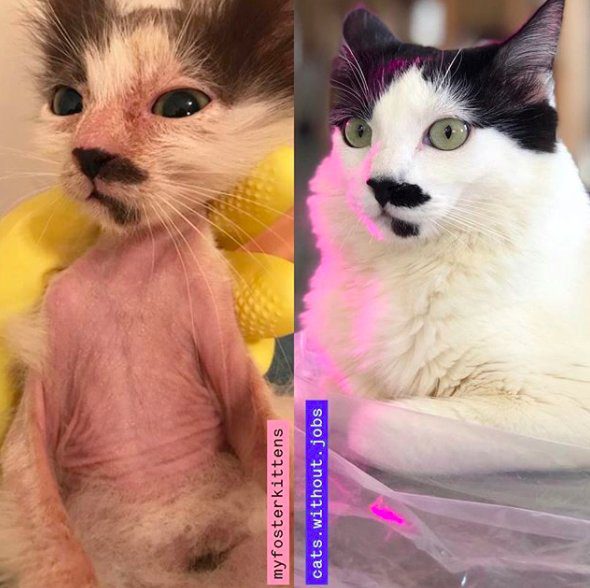 Because of all she had been through you would think Bunny would be anxious or nervous, but she’s actually an extremely active, quirky cat who loves to climb and get into everything. Her unique personality delights her family every day, and reminds them that their journey to getting her healthy was completely worth it. “She has been bathed so much that she has developed an obsession with towels,” Jennings said. “When I come out of the shower, she cries until I wrap her in one, hold her like a baby and kiss her on her forehead over and over while she sleeps in my arms. If I stop kissing her forehead, she bites my nose. She also likes to be carried around the house inside of an Ikea bag and comes running as soon as she hears one crinkle.” 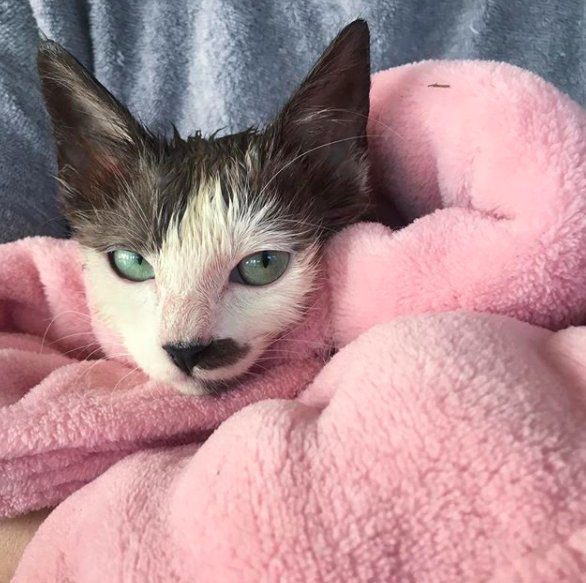 Bunny didn’t have a normal start to life, and was almost euthanized, but ended up with the most compassionate, dedicated people as parents. Together they helped raise her into the sweetest little fighter of a cat, who will be able to live her life happy, healthy and ringworm-free. “Not all ringworm infections are as bad as Bunny’s was,” Jennings said. “These cats deserve a chance that they don’t get in shelters — it just takes someone that is willing to spend the time and have the commitment that is required to make them healthy again.”