Instagram has decided to step up and help wild animals around the world! The potential reach:  800 million users.

A warning will pop up when people search for hashtags like #slothselfie, #monkeyselfie or #tigerselfie: “Animal abuse and the sale of endangered animals or their parts are not allowed on Instagram,” the message reads. The real story behind the wildlife selfies, which have increased by 292 percent since 2014, is full of pain and suffering.

One such story this year was when World Animal Protection (WAP) released heartbreaking footage shot undercover in the rainforest. 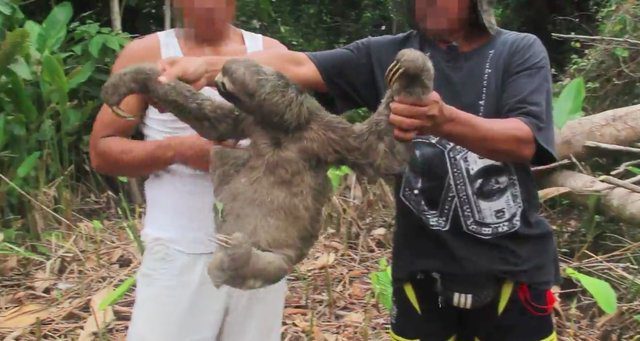 In Peru, illegal loggers were cutting down a tree. While it fell, a wild sloth could be seen clinging to its trunk. That is when the men pried the scared animal off the dead tree, put her in a bag and brought her to a market to be sold to tourist destinations as a photo prop.

After being brutally snatched from his home in trees, this sloth was sold to people who will likely use him as a photo prop. All he wanted was to live in his natural habitat. But instead he was cruelly captured, shoved into a bag, then forced to spend the rest of his life entertaining people. This #InternationalSlothDay, you can help vulnerable sloths suffering for profit. Sign up to our Wildlife Selfie Code now, and commit to cruelty-free selfies – go to the link in our bio.#NotEntertainers #worldanimalprotection#animalprotection #protectanimals #SlothDay#WorldSlothDay #cutesloth #slothsofig#instasloth #animalcruelty #wildanimal #sloth

So many other exotic animals are threatened, and all promote using animals for snapshots, Selfies with tiger and lion cubs, orangutans and chimps are being taken despite the realities of their treatment and the threats to their kind, like habitat loss and the illegal pet trade. Such close interactions with humans can be very stressful for the animals.

“We congratulate Instagram on taking this important step towards educating its users about wild animals that are suffering for selfies and for recognizing that animal abuse happens both in front of and behind the camera,” Cassandra Koenen, head of wildlife campaigns at WAP, said in a statement. “With its community of over 800 million users, Instagram has the platform to change the conversation about the use of animals as photo props. We are encouraged by this first step towards changing the acceptability of using animals for our entertainment.”