Home
animals
What To Expect After Your Dog Is Neutered

We all know that the benefits of neutering extend well beyond controlling the homeless dog population. Neutering literally saves lives. According to the ASPCA, it also means a longer, healthier life for your pet. The surgery can protect against certain reproductive cancers, cut down on a male dog’s urge to escape his leash or backyard to find a mate, and even help with some behavioral issues.

Before bringing your dog in for the surgery, questions may flood your mind: What’s the difference between spaying and neutering? (Spaying is a term for removing a female dog’s reproductive organs, while neutering is the male’s procedure — through “neutering” can be used for both informally.) Will my dog’s personality change after she’s spayed? How long will it take to recover after neutering? Will neutering hurt him? Will he be angry with me? What if she wanted to have puppies?

Dog owners may ask all these questions. When I brought my own dog, Darcy, in for her operation. At only 7 months old, the little terrier mix could be having puppies of her own. I knew she needed to be spayed, and yet … I was anxious something bad might happen when my new best friend went under the knife. 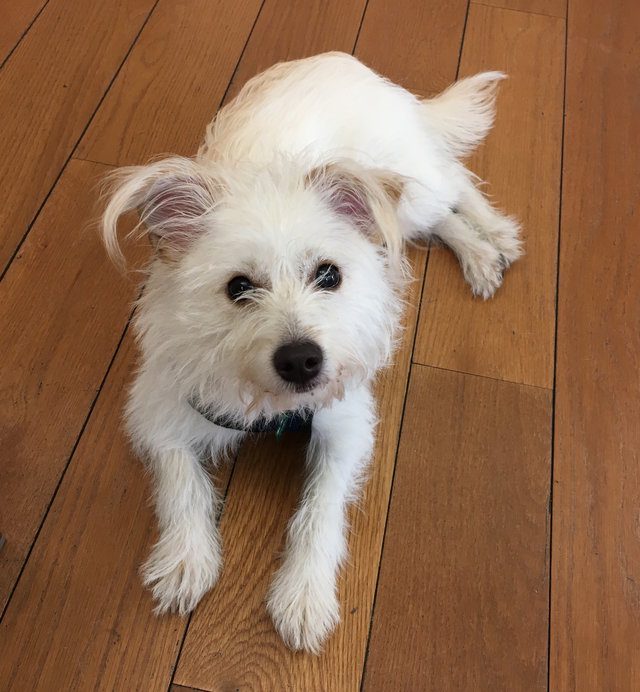 An unsuspecting Darcy awaits her surgery.

Knowing what to expect can help put a pet owner’s mind at ease. While there are inherent risks to surgery and anesthesia, the percentage of complications is low, explains Dr. Michael Lund, veterinary staff manager at ASPCA Community Medicine, which performs over 60,000 spay/neuter surgeries a year.

Here’s a timeline of what to expect:

Day of the surgery

Most clinics and hospitals, drop their dog off in the morning for his spay/neuter procedure and have your pup back that afternoon or evening.

“Most animals, with a round of anesthesia that lasts approximately 15 to 20 minutes, will be ready to go home and act quite normally six to seven hours after,” Lund said. “They might be a bit groggy or in some discomfort, but for the most part, a lot of dogs will act like themselves in a more subdued manner.”

Anesthesia monitoring is taken very seriously. Your vet will ensure that your dog’s heart and respiratory systems are doing well during the procedure. Right after surgery, your pup will be closely watched by the vet or vet tech for a half hour to make sure they wake up appropriately, Lund explains.

A post shared by Wilson’s Animal Hospital (@wilsonsanimalhospital) on Aug 5, 2017 at 4:48am PDT

Then your pet is placed in a warm, dry space where he can comfortably spend the next few hours until he’s ready to be picked up by his loving owner, of course!

Picking up your pet 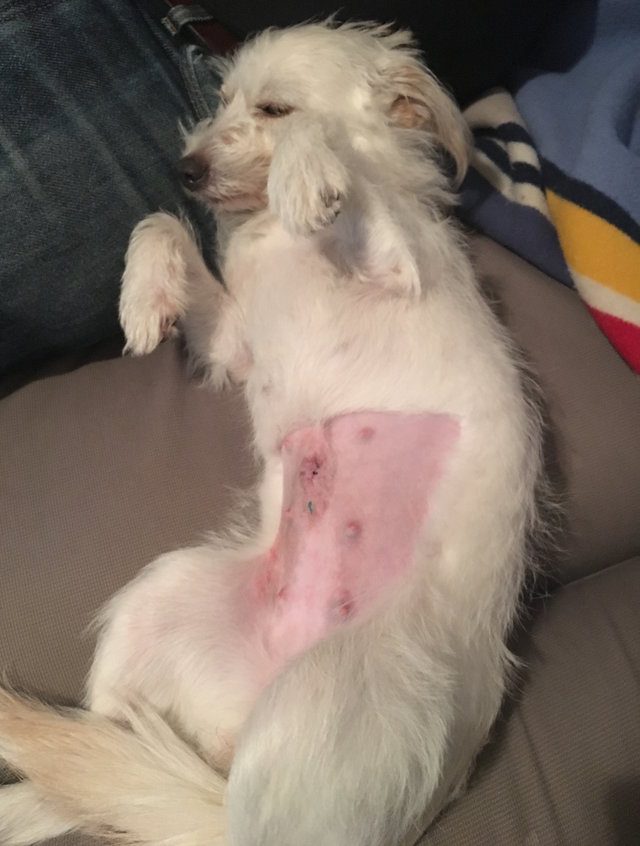 Darcy post-op and not happy about it

Once you pick up your dog, you may notice a range of behaviors, eventually, your pup will still act like himself.

“Every dog is a bit different. You may pick up your animal and they may look exactly like they did when you dropped them off,” Lund notes. “Others will be a bit more sensitive to the anesthesia and maybe a bit groggy, needing more of that pampering care from their families.”

When the vet tech brought Darcy out of surgery, she was shaking and yowling. Her stomach had been shaved, and there was a red incision running about 2 inches in length down her abdomen (male dogs’ incisions will be better hidden between their legs). Pet parents may also notice a small tattoo on their dogs’ bellies indicating that they have been fixed. 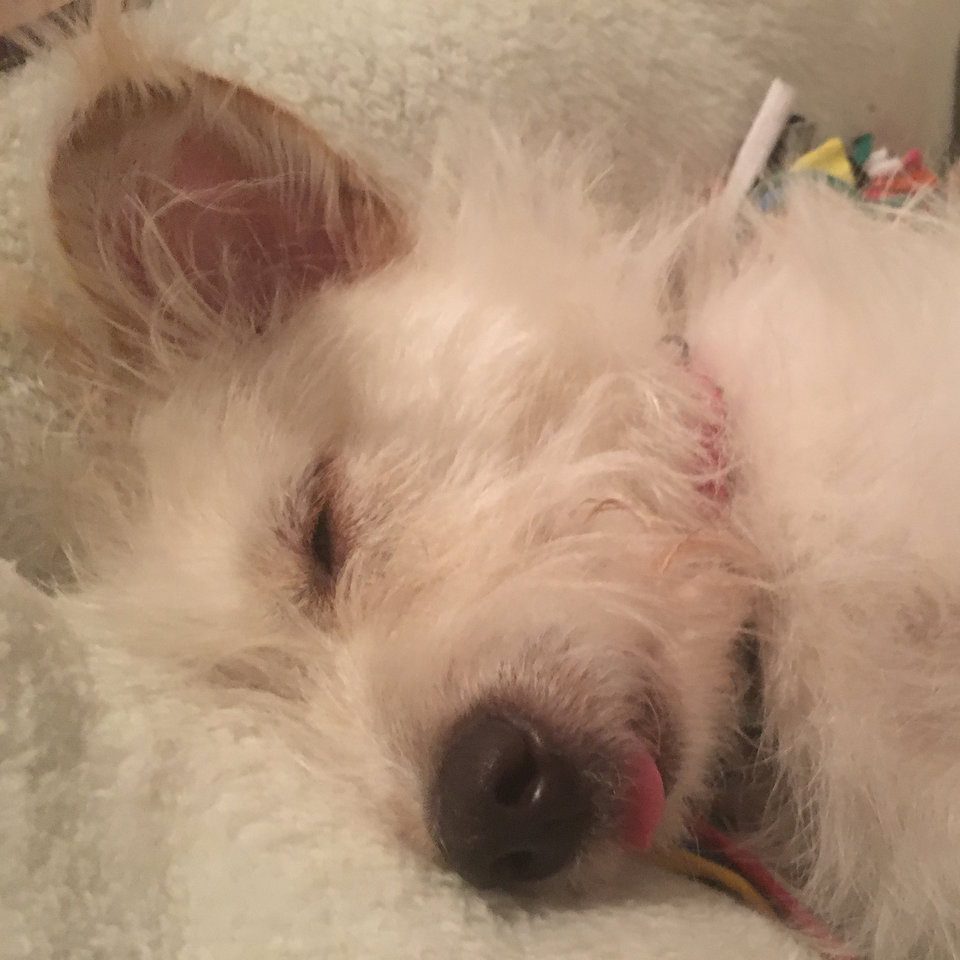 Sometimes you just have to sleep it off…

The surgery is a bit more involved for female dogs than it is for males, both take equal time to heal from spaying and neutering. “The soft tissues in the skin are going to take about the same for both procedures, and the incision sites are about the same for both procedures, so as long as there are no complications, 10 to 14 days would be the full recovery period for both surgeries,” Lund adds.

To make the safe journey home and make it comfortable for your pup, bring a towel or carrying case to the vet. If your dog has a special toy, Lund recommends bringing it along as well so he has a spark of excitement after his big day. You may be tempted to give your dog a tasty treat after his ordeal, but it’s best not to, as they could lead to stomach upset after the anesthesia.

When you get home

Darcy relaxes in her crate after being spayed.

When you arrive back at home with your dog, Lund recommends feeding your pet a moderately sized meal. After having fasted for over half a day, a bit of regular food will help with the healing process and be getting back to a normal routine.

You will want to curb any excessive activity that could disturb the incision site while it’s healing, but a quick walk on the leash within the first 24 hours after surgery — for bathroom purposes only — is also a good idea.

If your pup doesn’t want to do anything but rest, that’s OK too! Let your dog chill out in a warm, dry environment, with access to fresh water. “Every once in a while there is a dog hit hard by the anesthesia, and they will need a full night of rest and recovery at home before they start acting like themselves again in the morning,” Lund explains. 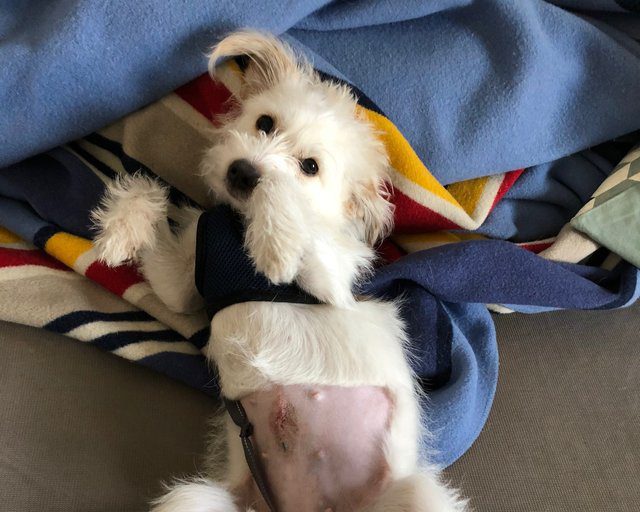 The day after surgery, your puppy should be acting more like himself. Feed and walk him as you normally would, but limit activities as much as possible. Carry your pup up and down the stairs and try to keep prevent him from leaping off the couch. If there are other dogs in the house, keep them separated to curb any roughhousing and play. This also means no baths for the next two weeks, since water may disrupt the surgical stitches known as sutures. 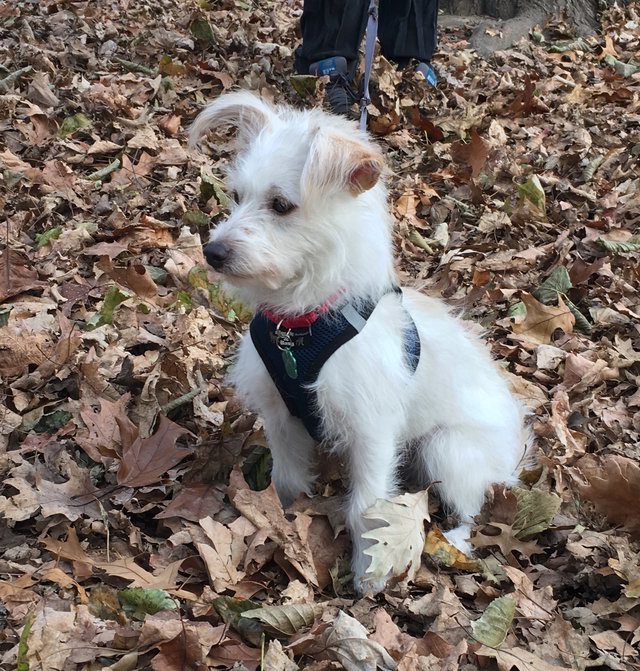 You should check the surgery site a few times in the first couple days to make sure everything is healing as it should. If you see discharge, redness or opening of one of the sutures, bring your pup back in for a checkup. Licking the area will be normal, according to Lund, but if your pup can’t leave the site alone, he may need to do the dreaded cone of shame or, for smaller dogs, a soft collar.

Side effects of the surgery may appear worse than they actually are. “For the surgery to be performed safely and cleanly, we do have to clip quite a bit of hair, so razor burn from that is expected,” Lund explains. “Sometimes it looks worse than it is and will resolve on its own.” The suture material often causes a reaction while the healing takes place, Lund notes, so you might see swelling around the incision site.

Knowing normal behavior for your pet before he goes in for the procedure can help you identify any issues that may occur during the healing process. “One of the telltale signs that something is not right … is that appetite is not coming back in first 24 hours after surgery,” Lund says. “Activity level is another thing that should bounce back quite quickly, and after a good night’s rest, you should see a happy, healthy pet just as you’ve always seen them.”

If your dog walks funny, has a stilted gait or severe tummy upset, these symptoms could suggest there was an issue with the surgery and that it’s time to call your vet.

Two weeks after … and beyond 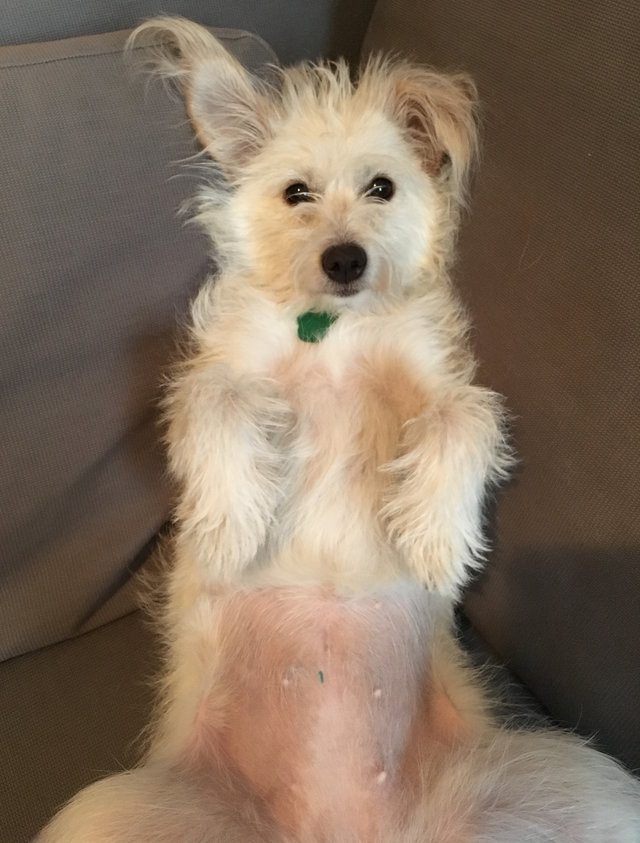 Darcy shows off her sweet tattoo.

At this point, your pet should be back to his normal routine. The incision site should look healed. At 10 to 14 days, any external sutures will be removed by your vet. If your dog had absorbable sutures, the incision site will be looking less prominent, though it can take up to two months for them to be completely absorbed into the body.

You probably won’t notice any behavioral or personality changes in your dog, says Lund, though altered hormone levels may make some pets less aggressive or territorial. If your female dog gains weight after spaying, it could be due to overfeeding and lack of exercise, not the surgery.

Your dog will likely go about his or her life just as before, but without the risks associated with reproduction.