Sue Naiden got an unimaginable call about a cruel man who had reportedly hung a young golden retriever by his neck with a rope and threw acid onto his back. Miraculously the dog survived the attack, and Trio Animal Foundation was contacted after the man dropped him off at someone’s house and never returned.

“The family was too afraid to go on the record about him to the police,” Naiden, president of Trio Animal Foundation said. “We offered a $5,000 reward if someone would come forward with more information so we could catch this guy. They never did.” 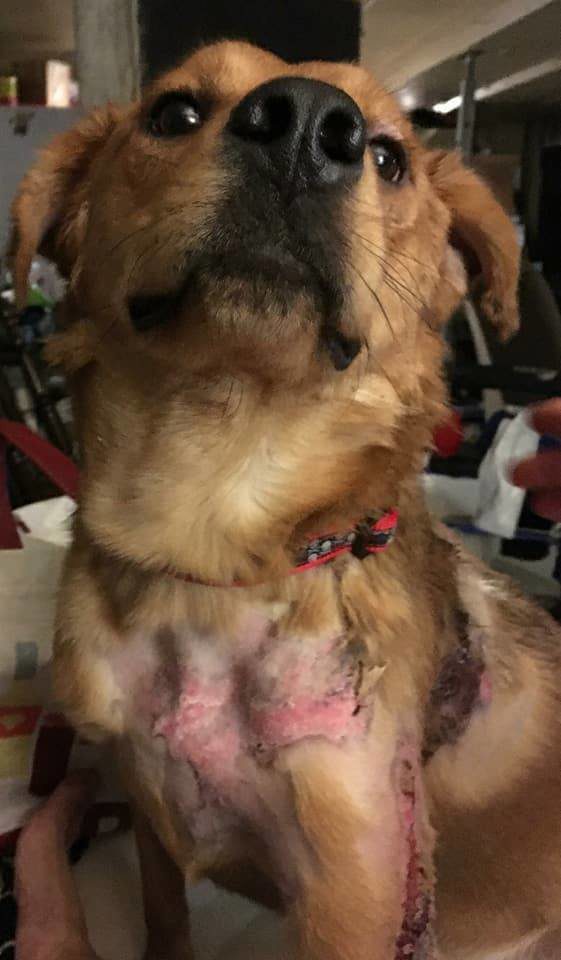 The poor dog, whom rescuers named Charlie, was in horrifying shape. He was living with the acid burn wounds for days before he received any medical help, and the painful burns covered most of his back and shoulders.

Medical care was immediately arranged at Delavan Lakes Vet Clinic in Wisconsin, which specializes in treating burns. Charlie didn’t require any skin grafts but did have to undergo a few procedures to remove dead tissue to encourage new skin growth. 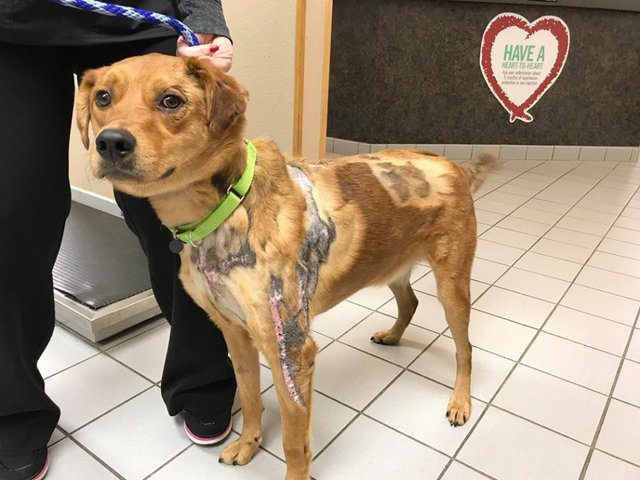 He was also treated with special burn creams and medicated baths and while being wrapped in bandages to protect the sensitive skin as it healed. Although he was starting to feel better, it was easy to tell that he couldn’t forget what had happened to him.

“He was very, very wary of us putting a leash on him because he had been hung,” Naiden said. “Since had such sensitive wounds on his back, we couldn’t put him in a harness. We went super slow with him and he just flourished.” 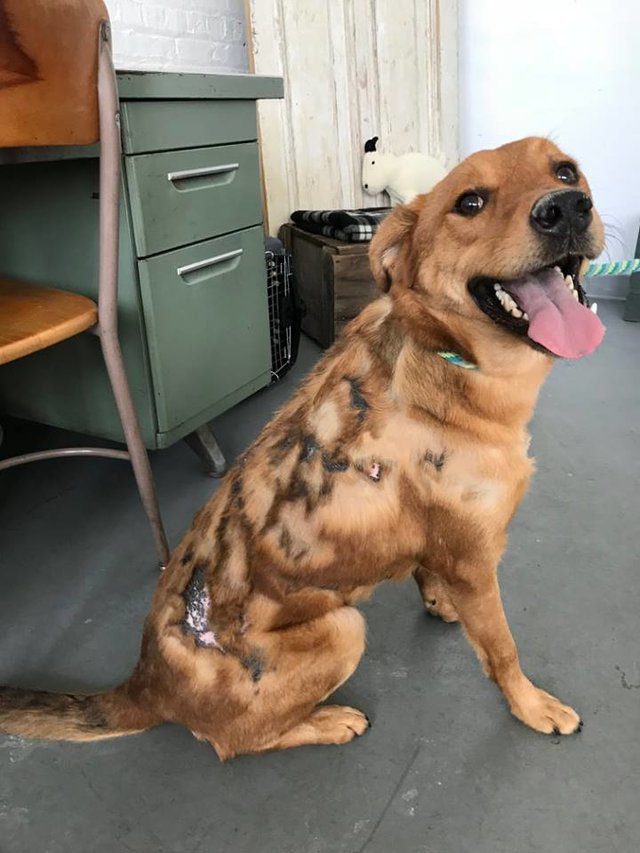 Charlie was treated and after two weeks of intensive care at the veterinary hospital, he returned to the rescue in Chicago. There, he met the rescue’s resident therapy dog, Hazel Grace.

Hazel Grace was also a burn victim who, before being rescued from the streets of Chicago, had been set on fire by a group of kids leaving her entire stomach and back covered in burns. She needed skin grafts and was hospitalized for seven weeks. Naiden adopted her in the process.

“When they first met, they just looked at each other like they knew exactly what the other had gone through,” Naiden said. “They sniffed each other’s burn areas, and when they started playing, were very careful of the other’s sensitive skin.” 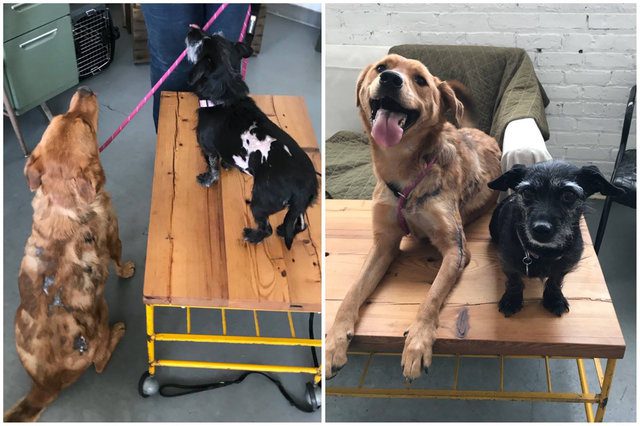 Hazel Grace’s main job is to provide emotional support to other dogs, but her relationship with Charlie was extra special, Naiden said. 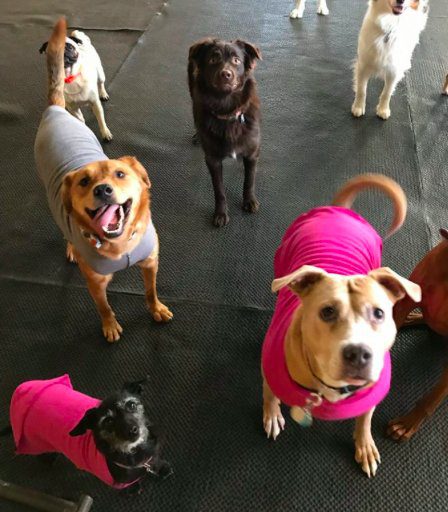 “They bonded instantly — and it seemed like Charlie looked up to her a lot even though he was bigger,” Naiden said. “Like his case, the people who did this to her were never formally charged. Everything has been on hold for at least three years now.”

Charlie is only about 2 or 3 years old and has a ton of energy. When he wasn’t hanging out or playing with Hazel Grace, he played with other dogs in the rescue’s playgroup. 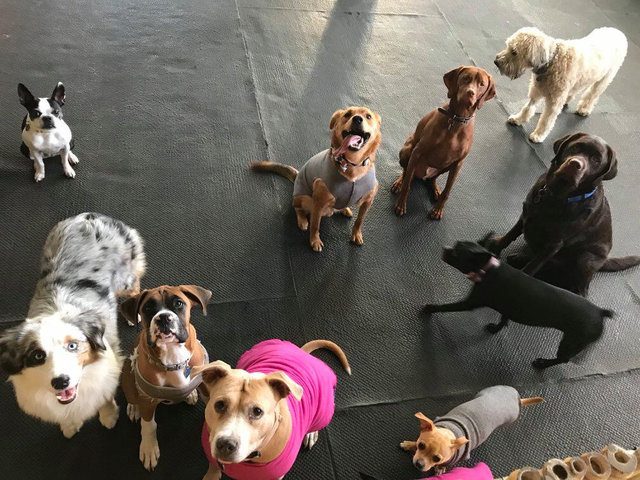 Charlie’s burn scars kept healing and he wore a sweater or T-shirt while playing to avoid getting scratched. By late January, the perfect family decided to bring him home.

“When I first heard his story, I just felt this overwhelming urge to go see him,” Karen Lagioia, Charlie’s new mom, told The Dodo. “We weren’t really looking for another dog — but as soon as we met him, my husband just looks at me and goes, ‘So we’re bringing him home, right?’” 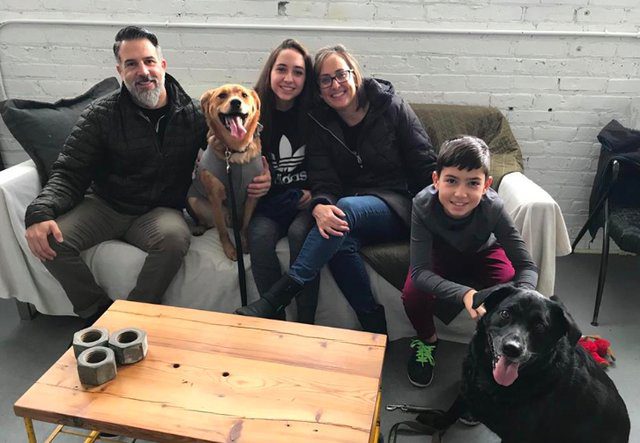 Lagioia’s children, a teenage boy, and girl, fell in love with him instantly, too. Since the rescue preapproved them before their meeting, the family was able to welcome him home that day.

Charlie’s skin is healed now, and his scars will require special care for life. In the summer, he’ll have to wear sunscreen, and will always have to wear a shirt while he plays with other dogs to avoid getting scratched, but it doesn’t faze him at all. “Any concern with his special needs being too hard or too time-consuming was completely out the window,” Lagioia said. “He’s just the smiliest, happy guy — we really feel like we hit the jackpot. We talk about every single day how perfect he is.”

Charlie is at home in the Chicago suburbs and spends his days lounging with his big brother, Moose, and playing outside with the kids. 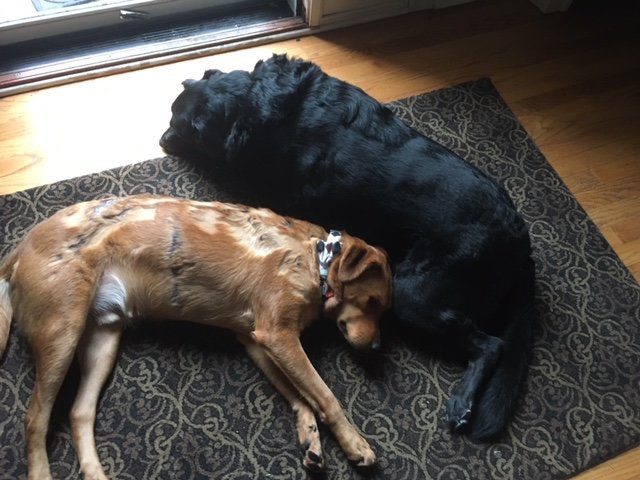 Lagioia said the only problem is that the kids bicker about whose bed Charlie will sleep in at night.

“They are over the moon for him,” Lagioia said. “They can’t wait to get home from school every day to see him.” There are no updates about the man who abused Charlie, but Naiden is confident that he is on the police’s radar and hopes the people with information to formally charge him will come forward.

Naiden couldn’t help but tear up when she first saw him meet his new family.