Frog, the rooster, walks his favorite person, 13-year-old Savannah, to the bus stop every morning.

“He will stay with her at the end of the driveway until she gets on the bus,” Holley Burns, Savannah’s mother said. “He will then just come back and do his adventures with us and our daily routines until it’s time to meet her when she gets home.”

Frog runs as fast as his little legs will carry him to meet Savannah when the bus brings her back home.

“He hears the bus stop a few houses down on the county road,” Burns said. “And then he’s running down to the end of the driveway before it gets there. Every day.”

Frog came to live with the Burns family in Atlanta, Texas in February 2017. Instantly everyone immediately noticed that he was different. He not only had feathers on his feet, but he had an unusual way of moving, which earned him his name. 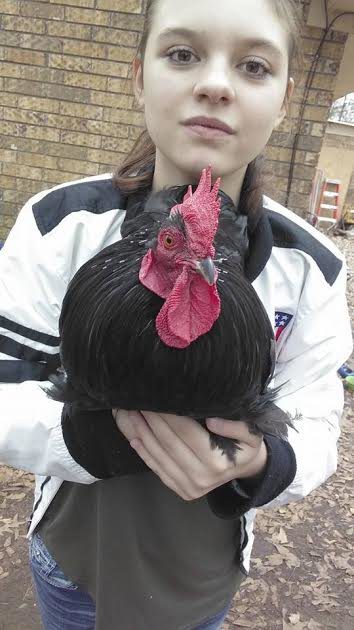 Savannah holding Frog the rooster in her arms

The funniest thing about Frog was who he chose to socialize with. He preferred to spend his time with people, Savannah in particular, instead of hanging out with other chickens. 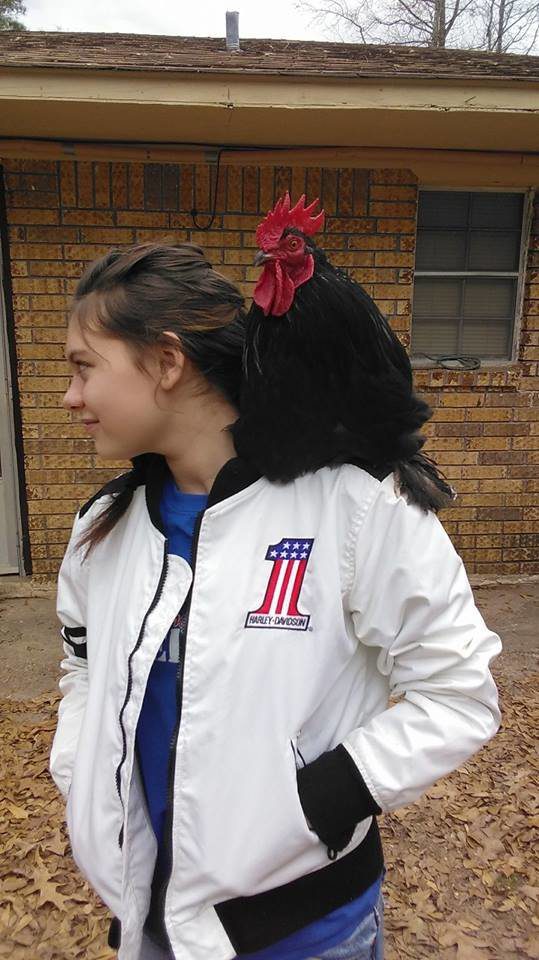 Savannah started carrying Frog around when he was just a small chicken. They would do chores together and their bond grew. 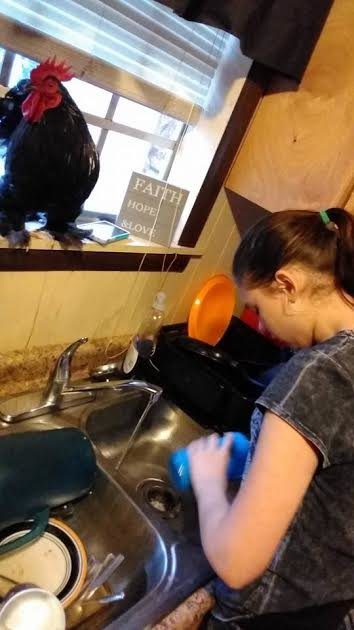 Frog sitting on the windowsill as Savannah does the dishes

“She’d take him to the laundry room and he’d watch attentively,” Burns said. “She’d go and wash dishes and she’d set him up on the counter and he’d watch her wash the dishes.”

The pair was inseparable. “Everything is Frog and Savannah,” Burns said. “She pulls him in a wagon. Wherever she goes, he’s right behind her. He gets up on the bunk beds with her. He’ll sit and watch TV with her.” 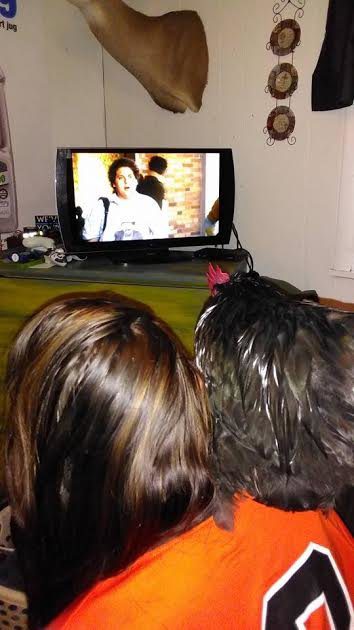 Frog sitting on Savannah’s shoulder as she watches TV

Burns is not surprised that Frog bonded with her daughter. “She’s what I call an animal whisperer,” Burns said. “She can walk up to anything, and it’s just instant — all animals are attracted to her.”

However, she’s never met a rooster quite like Frog. “I don’t think he thinks he’s a rooster,” Burns said. 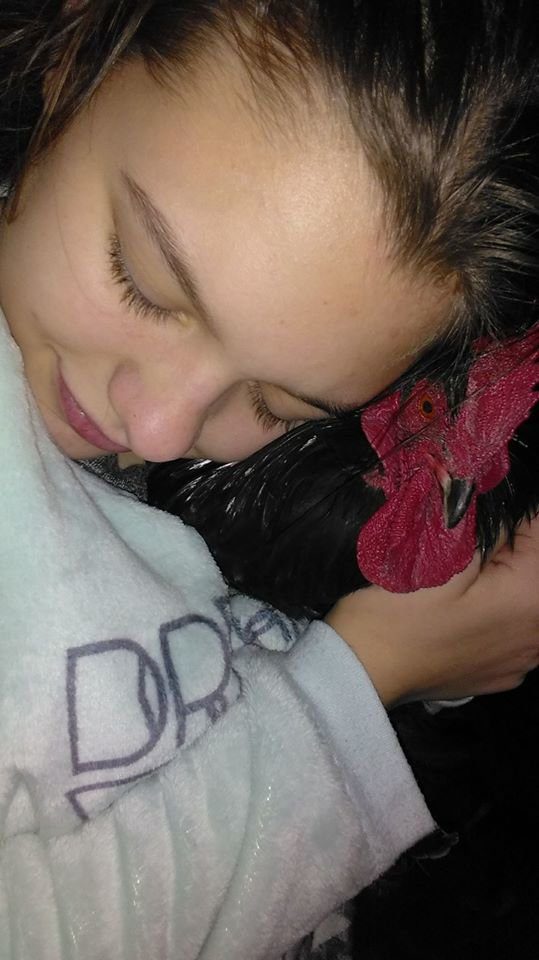 Frog also has a canine best friend, Casper the dog who was abandoned in a McDonald’s parking lot last year, when the Burns family found him, they brought him home to live with them.

“Casper was really terrified of storms, and Frog saw him cuddled up in the laundry room,” Burns said. “So Frog cuddled up beside him. He was like, ‘Hey, it’s OK. Don’t worry about it. Nothing is going to happen to you in the house.’” 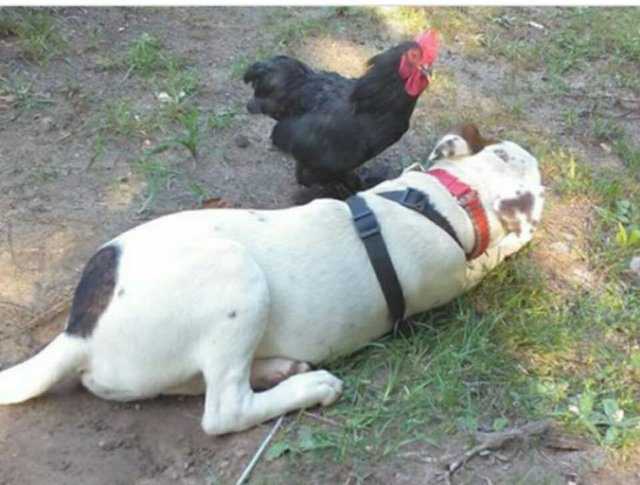 Frog and Casper spending time together out on the grass

Frog and Casper have been best friends ever since. “They’ll play together,” Burns said. “Frog will jump on top of Casper, and Casper will lie on top of him, like, ‘OK, what are you doing?’”

The Burns family is used to Frog’s unusual ways, but when people meet Frog for the first time are sometimes unsure about him. 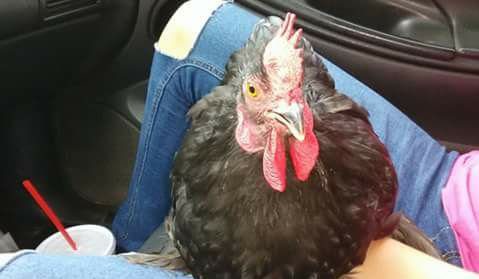 Frog going for a car ride with Savannah

“When people see a rooster running at them, everybody’s first instinct is, ‘Oh my God, he’s going to attack me,’” Burns said. “But he’ll greet you in the driveway and say, ‘Hey, I’m here! How are you doing?’” 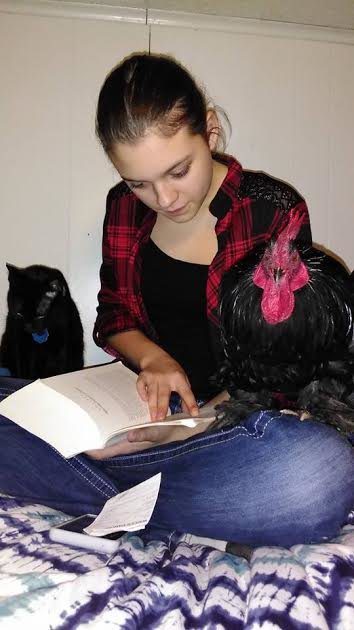 Frog sitting on Savannah’s lap as she reads

“It’s gotten to the point that if they [Savannah and her brother] don’t get off the school bus on time, he [Frog] will get on the school bus,” Burns said. “Our bus driver is really good — he knows to watch out for Frog. He makes sure they’re in the clear before they leave.”

Savannah loves Frog the most and the feeling is clearly mutual. 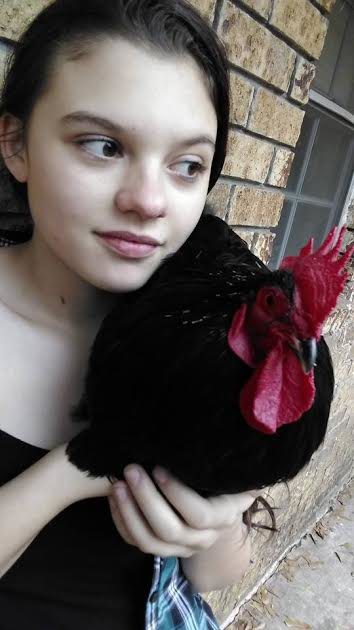