In a neighborhood in a city in Thailand, two handsome dogs live across the street from each other. Messy and Audi may be separated by fences, but that has not stopped them from developing a bond.

Oranit Kittragul is the owner of the yellow lab named Messy, and often, she would hear Audi, a husky, alone in the yard crying. Messy’s and Audi’s homes are divided by a large fence. Kittragul would tell Messy to talk to Audi and try and stop him from crying. Audi’s owner works long hours every day and has to leave Audi alone.

Kittragul admits that she has no idea what the two canines are saying to each other, but their canine communication seems always to calm Audi down, and he stops crying. 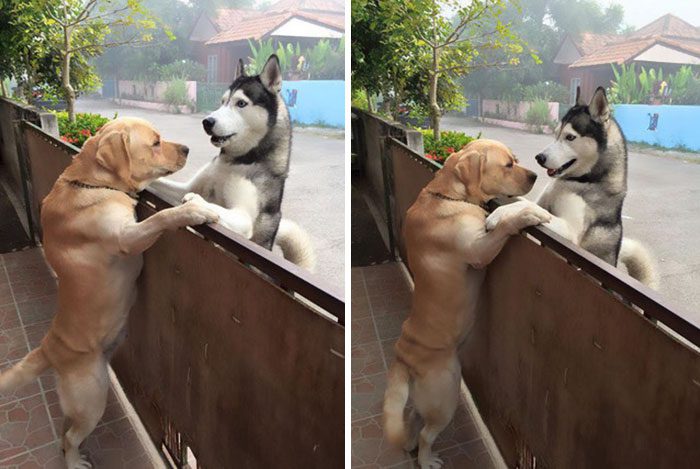 Kittragul forgot to lock the gate to their fence one day and Messy ran across the street to visit Audi.

The photos show just how close the two are, they are actually hugging each other. Kittragul captured the beautiful bonding moment between the two dogs, and her photo has since gone viral. 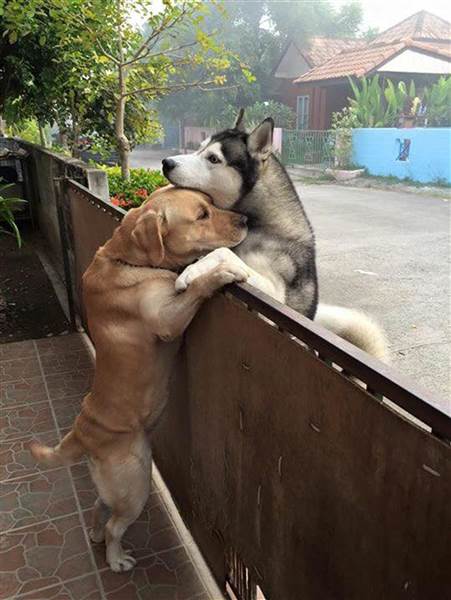 Dog experts say that when two canines are barking and using body language, they are communicating real thoughts and actions. Canines share a secret language because they are truly social animals.

When dogs rear up on their hind legs as seen in the photos of Messy and Audi, this is a sign of affection between the two. When they slap each other with a paw, this is a sign and translates that dogs trust each other. Even biting each other is okay because the canines are simply wanting to play.

When they bark; that’s how our canines “speak.” Dogs love barking, and experts say the pitch or volume of the bark determines the canine’s emotional level. If either increase, then the dog’s emotions are heightened.