Home
animals
Cow Grieves In Exasperation Over Her Missing Baby, Then She Sees A Trailer Pull Up…

When Karma, the cow, was rescued by The Gentle Barn Animal Sanctuary, they had no idea that Karma’s previous owners hid her baby, Mr. Rojas.  The sanctuary workers kept the baby, so they could sell him once Karma was gone. After Karma was separated from her baby, she was heartbroken.

That is when the rescuers decided to step in. 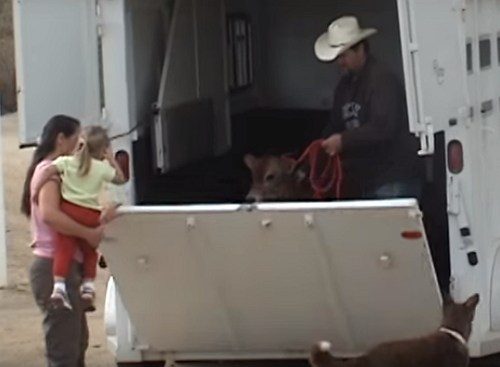 The workers returned to where she lived and demanded the people give them Mr. Rojas so he could be with his momma who had missed him desperately.

When Karma saw the trailer toting Mr. Rojas pull into the sanctuary, she knew that was her precious baby. She started calling out to him. Mr.  Rojas was weak, starving and mistreated, while Karma made the most heartbreaking guttural sounds.

Watch the video below to see their incredible reunion.