I adopted Kobe in June ’09 from one of the rescue groups that visits my local pet store on Saturdays. Kobe was about 14 weeks old at that time. 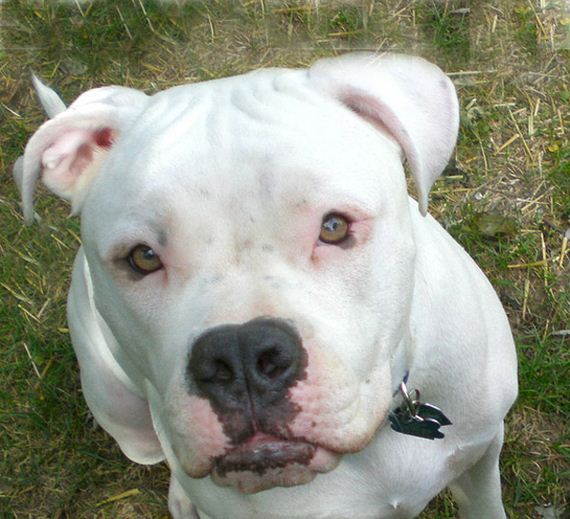 The original owner, a backyard pit bull breeder, wasn’t able to sell Kobe because he was deaf.

This rescue group knew me from the training I had done with my other dog, Connor.

During the three years I had been training Connor, I would take him into the pet store on rescue group Saturdays because it provided great distraction training, and we would often end up visiting with the ladies who worked with the group.

Jill, the pit bull specialist, knew that I was interested in having a pit as my next dog. So when Kobe came to her attention, she hoped that I would be interested in him. 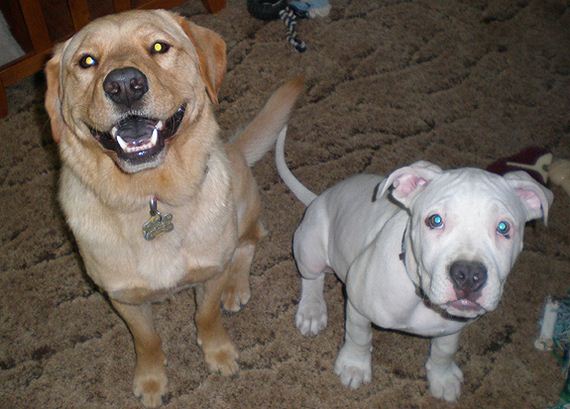 I was enthralled to find out he was deaf, too. That’s because I was comfortable with dog training and using hand signals, which deaf dogs need. Dogs are so much more visual than we are. Plus there was no way I could leave that little puppy with the owner and have the puppy become a front page news story in a year because he was simply left out in the backyard on a chain and never trained or socialized. That’s what the owner was thinking of doing. He had planned on keeping one of the pups from Kobe’s litter and thought that if he couldn’t find a home for Kobe that he’d just keep him as well.

I took Kobe in and signed up for a puppy obedience class to start his training and socialization.

I had lots of experience training dogs. You see, years ago I had a Siberian Husky and I had used some basic hand signals with him, and I had used those basic concepts to teach my hearing dog.

I learned early on that I couldn’t verbally get the dog’s attention when he was misbehaving. I had to physically get off of the couch or move from wherever I was to wherever he was in order to touch him to get his attention. I felt ready for Kobe. 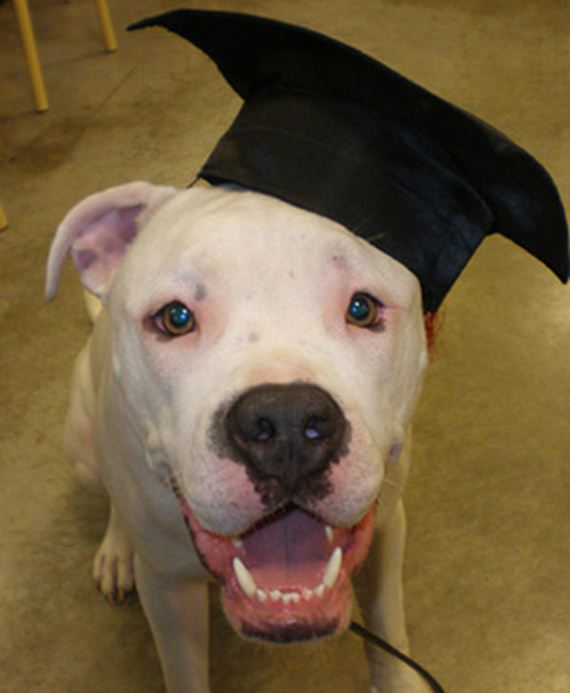 Training Kobe
Training Kobe wasn’t easy. He took a little longer to train since he couldn’t hear the vocalizations. But fortunately when I’d call Connor, Kobe would trail alongside of him in the yard, so it made it easier to get his attention.

Connor was a huge help in training Kobe. He had already earned his CGC (Canine Good Citizen certification) and passed his Therapy Dog International test. So, in the fall of 2009, thanks in part to Conner, Kobe and I took an AKC Star Puppy class and passed with no problems.

We continued to take classes and go out and about as much as possible to socialize.

During the process I learned that Therapy Dog International no longer tested or registered deaf dogs, so we looked at becoming certified through the Delta Society. 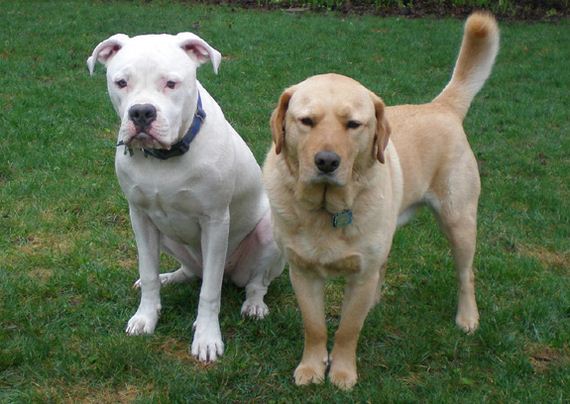 Becoming a Therapy Dog
I signed up Connor and Kobe for the Delta Society’s test. Both of my boys passed. Kobe passed with a rating of “complex.” This means they feel his is well-mannered enough and confidant enough to go into any situation. Connor received a rating of “predictable.” This means I only take him into controlled and predictable situations. Basically, my big deaf pit bull is more reliable in strange and unpredictable situations than my Labrador/Chow Chow mix. I don’t attribute this to their breeds at all. I attribute it to the fact that I have had Kobe since he was a small puppy and made sure to socialize and train him during the most impressionable time of his development, whereas I didn’t get Connor until he was almost 1 year old from a county animal control shelter.

Once we passed our test we became registered Pet Partners with the Delta Society.

Happy Campers
Last year the three of us visited our local Lutheran Home during the summer. I also became aware of Camp Braveheart, a grief camp for children that is sponsored by Genesys Health Systems Grief Recover Programs. Last August was our first time attending the camp, and Kobe loved it and was a huge hit with the campers. Kobe and I are not there to actively counsel any of the students. We are there to act as an emotional release and, hopefully, to make the children feel comfortable. 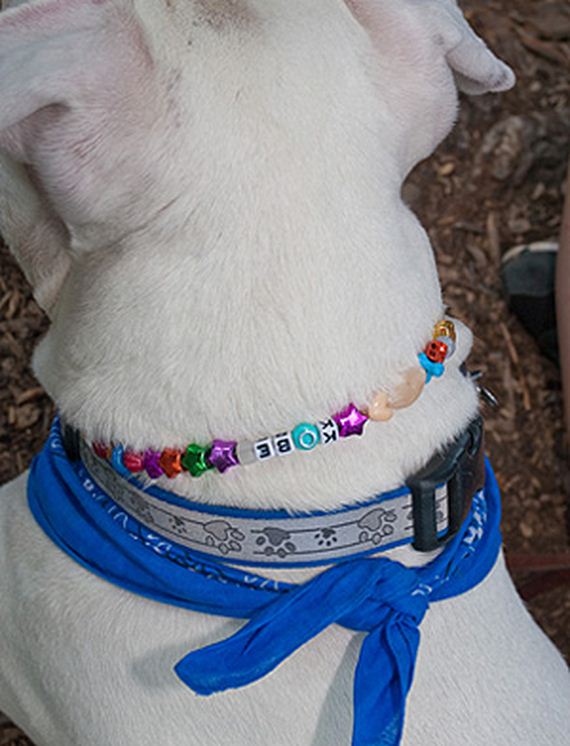 Let me tell you a little story about it. On our first day last year, a young girl came to camp with her older sisters. Because they were different ages, they were in different groups. The little girl was upset and resistant to leave her sisters to join her group. Kobe and I went over and stood by her as the group counselor talked to her. Kobe just went up next to her and gave her his big pittie grin. When she found out that Kobe was the dog for her group, she began to relax a bit and pet him. Eventually, she felt comfortable enough to leave her sister and walk with Kobe and I to the cabin where her group would be meeting.

The next day, she had made Kobe a necklace with his name on it. He wore it the rest of the weekend, and I still have it draped over the frame of a picture of him.

We’ll be going back to Camp Braveheart again this year!

Although Kobe is from a backyard breeder and we’ll probably never know exactly what his breed make up is, he definitely falls into that generic pit bull category. As such, I knew it was my responsibility to make him the best ambassador of the pit bull breeds that I could. He does this on a regular basis: from simply walking through my busy touristy hometown, to going to outdoor concerts in the park, to visiting people in long-term care facilities, to helping young children feel okay about their grief. 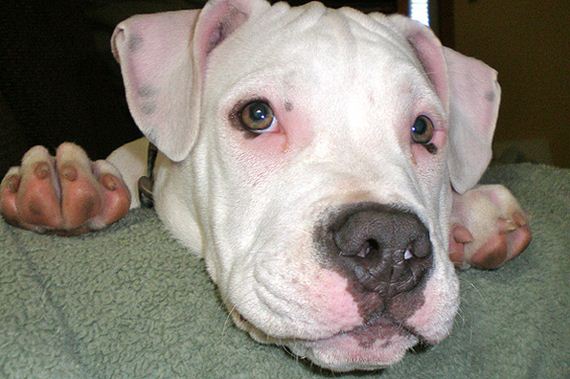