Most people passed by a two-year-old dog named Ellen without even realizing it. That’s because the poor, homeless animal looked like a pile of trash.

Surrounded by flies and gnats, Ellen was discovered on the streets of Chicago, her fur completely grown out, matted and soaked in urine and feces.

Thankfully, in July 2014, the wonderful folks at the Trio Animal Foundation took Ellen off the streets and into their facility. At first, they couldn’t even tell if she was a boy or a girl, or which end was front or back.

Ellen was trapped under a “hard shell of fur,” but thanks to a groomer named Kelli who had to come into work early, two pounds of matted, clumpy fur was shaved off the poor dog’s body.

10 minutes later, the staff discovered Ellen was indeed a girl — and that she absolutely adorable.

In July 2014, this two-year-old dog was found homeless and hungry on the streets of Chicago. 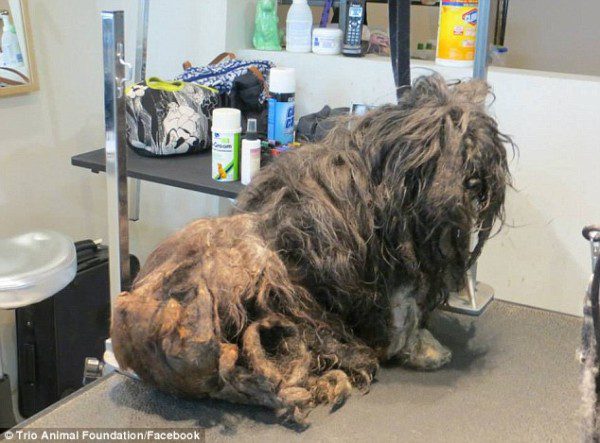 Her rescuers at Trio Animal Foundation described her as “a clump of pungent urine soaked matted fur.” Veterinarians couldn’t even tell if she was male or female — or which end was front or back. The dog was so matted that her back legs dragged across the floor.

Kelli, a veteran groomer, agreed to come into work very early to see if she could help. 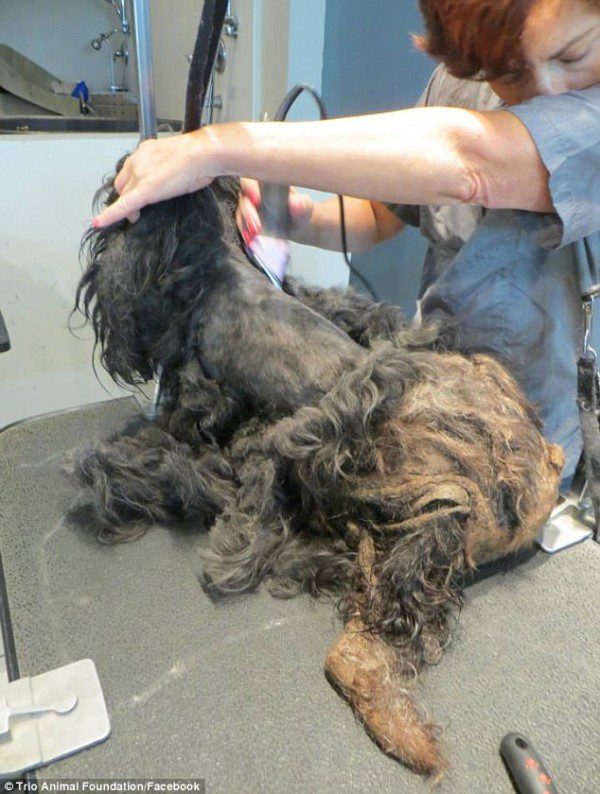 She weighed 8.5 pounds, and two of those pounds was nothing but hard, matted fur. 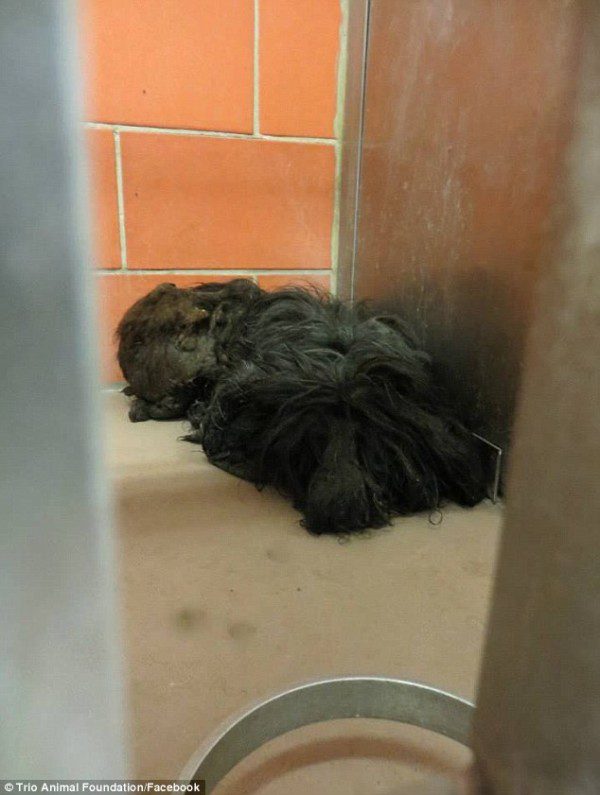 The much-needed haircut took nearly three hours to complete. 10 minutes into the cut, she was given a name: Ellen. “She looked me in the eyes and it was as if she was saying thank you… Her past abuse was literally being shaved away,” her rescuers said. 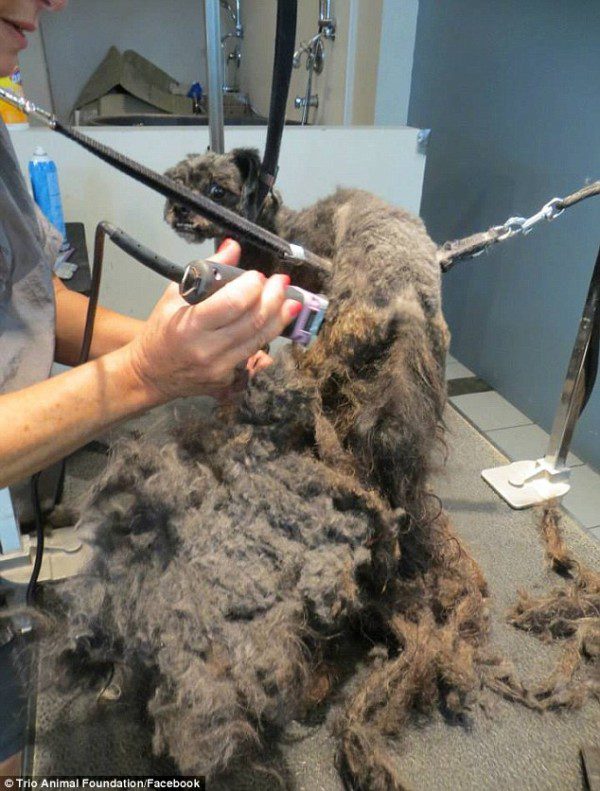 It’s amazing Ellen survived as long as she did with her matted fur. Just look at the amount of fur, compared to her tiny frame! 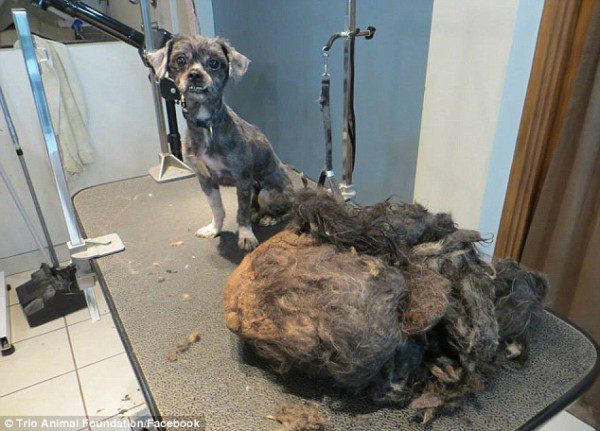 After her haircut, Ellen was bathed and given her first leash, toys and a warm dog bed. She also received her necessary shots and medical care. 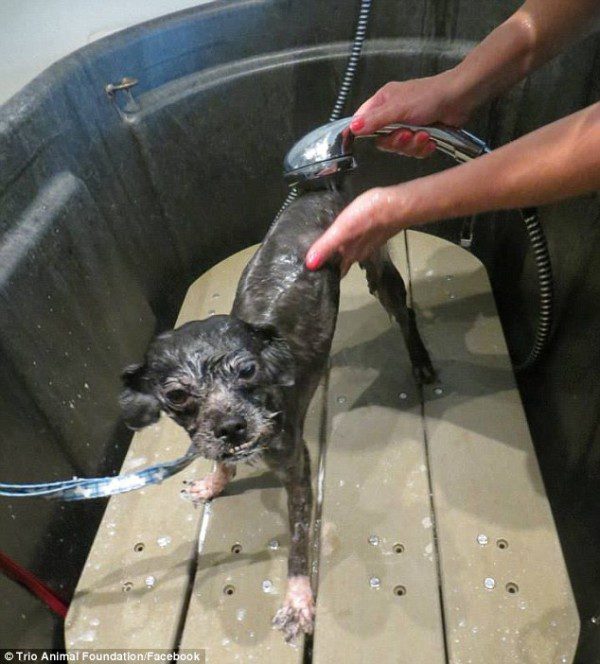 The Trio Foundation was shocked by the number of applicants who wanted to provide Ellen with a forever home. Ellen’s rescuers say that saving Ellen was one of their proudest moments as animal heroes. Ellen is a sweet little girl with a big personality. She is forever grateful to the group of angels who saved her that day. 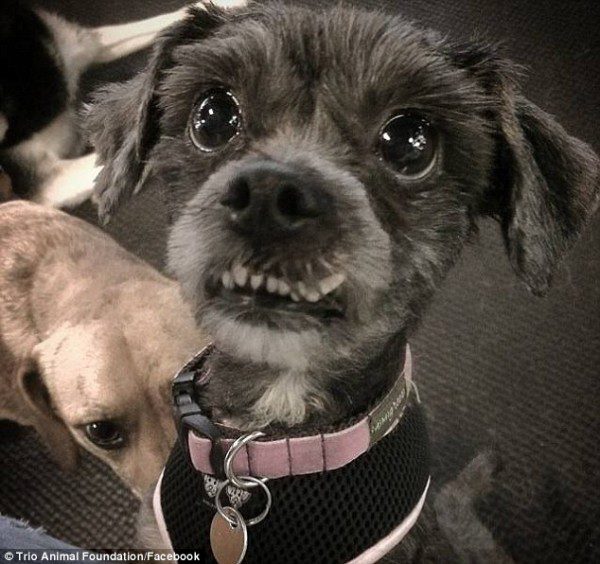 The Foundation found her the perfect home, complete with a new canine friend — another pup named Linus. It’s incredible what just a little bit of love (and a good pair of scissors) can do.