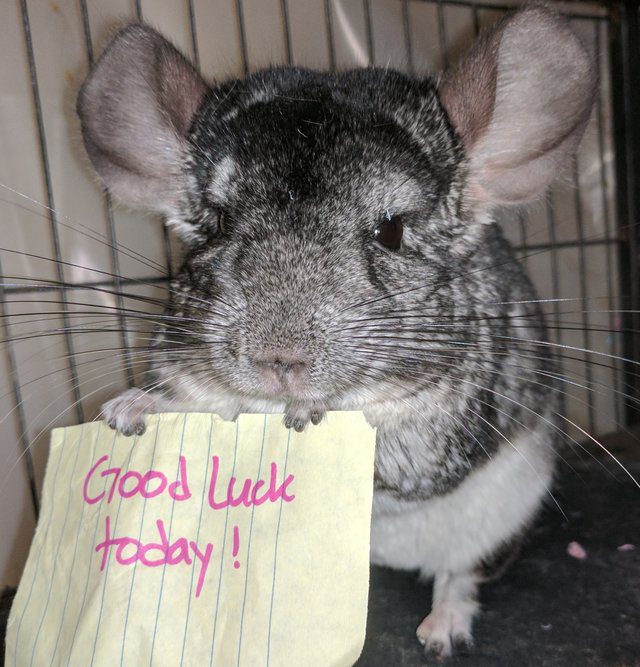 “We found that Ari, in particular, is incredibly fond of carrying things around,” Anne Walker, their owner, said. “We frequently find him in his house standing still, holding wooden sticks, balls, and blocks we give them as chew toys, while his brother lounges in the wheel.” 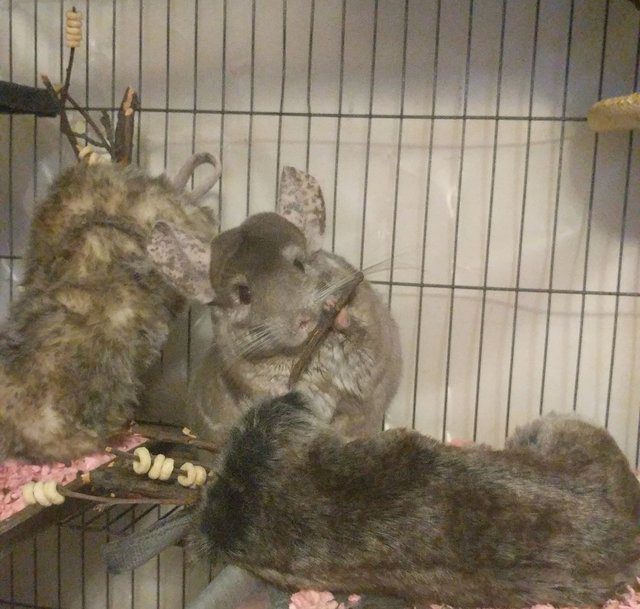 Their mom first discovered this special talent when Ari and his brother escaped their cage while she was out. “I walked in and found him in the middle of our living room clutching a plastic fork to his chest and standing stock-still on his hind legs,” Walker explained. “The pair is incredibly protective of one another, and I imagine he may have been standing sentry while his brother explored.” 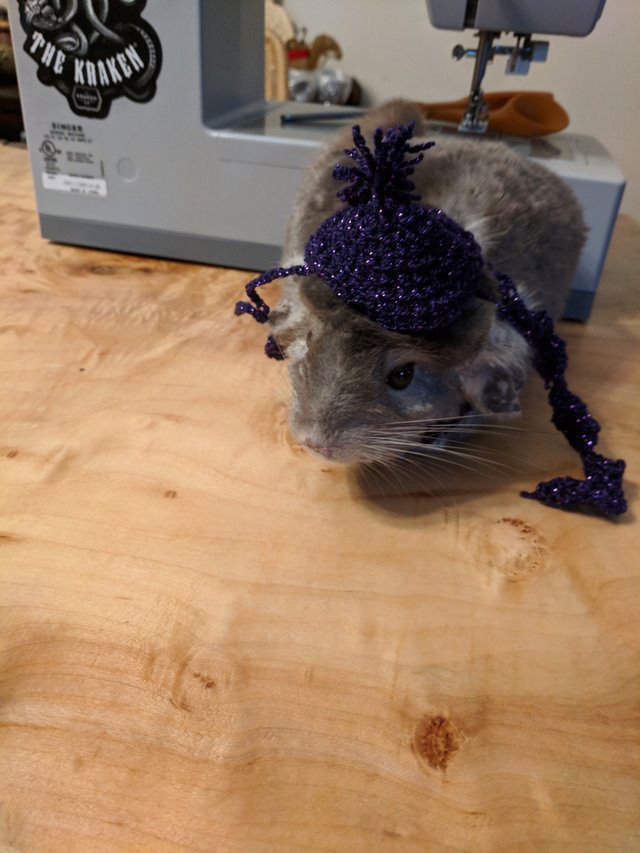 When Walker and her wife started looking into adopting a pet four years ago, a chinchilla was not the first animal that came to mind. They discovered that their building was not dog or cat friendly, Walker, who loves rodents, began looking for alternative animals in their neighborhood that needed to be rescued.

“There were, like, a billion,” Walker said, “each with the same ‘got it for my kids now it’s being neglected’ story.” 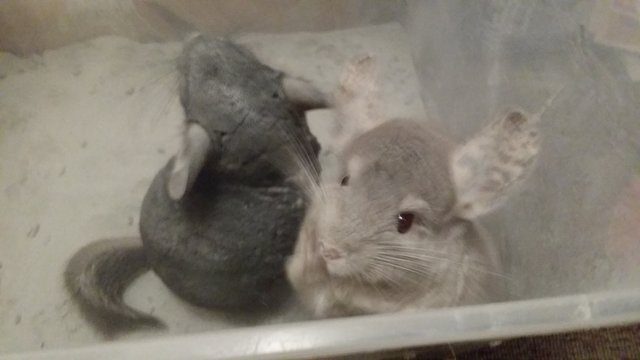 Ari and his brother being given away on Craigslist, and after a quick email exchange with the owner, she brought them home. “A lot of people end up with unwanted chinchillas and bunnies because they think they’ll make super cute pets for kids, and don’t realize that they require a lot of work and patience,” Walker noted. “Also, they’re a lot faster than children are.”

Ari and John settled in but had difficulty connecting with their new moms. This, unfortunately, is a side effect of not being well-socialized as kits. “It has been a difficult road getting them to really attach to us,” Walker added. “They both started terribly shy, and we’ve had to put a ton of effort into getting them to trust us … I think Ari has finally accepted us into his head, as I’ll find him standing and watching when we take naps on the couch. That, or he’s plotting his revenge.” 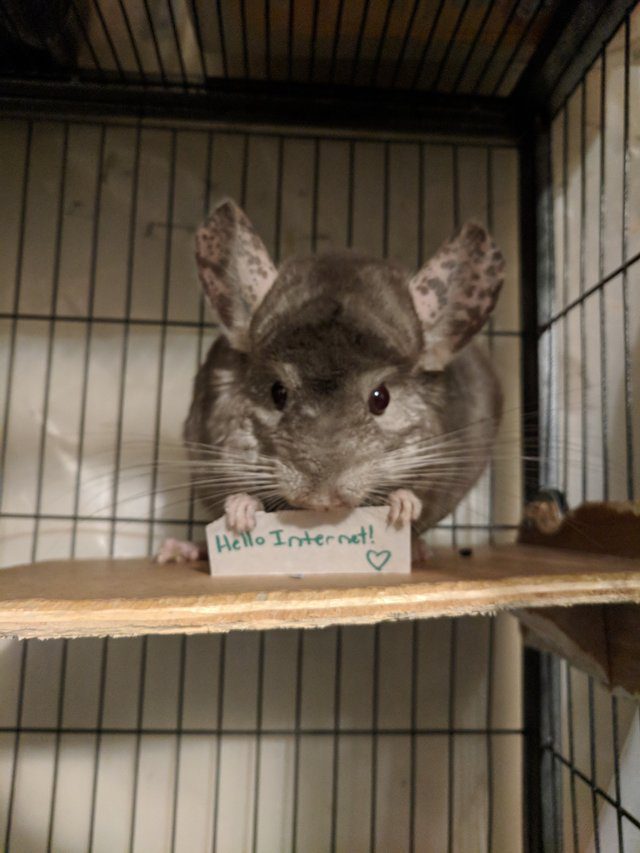 Ari has a habit of standing up and holding objects. So Walker started sending pictures of him clutching little signs to her wife, Jess when she was at work or having a bad day — putting an instant smile on everyone’s face.

“The first sign I actually sent to Jess was after she got something horrible splashed into her eye at work,” Walker recalled. “It says ‘Go to the doctor!’ because for real, she needed to go to the doctor.” 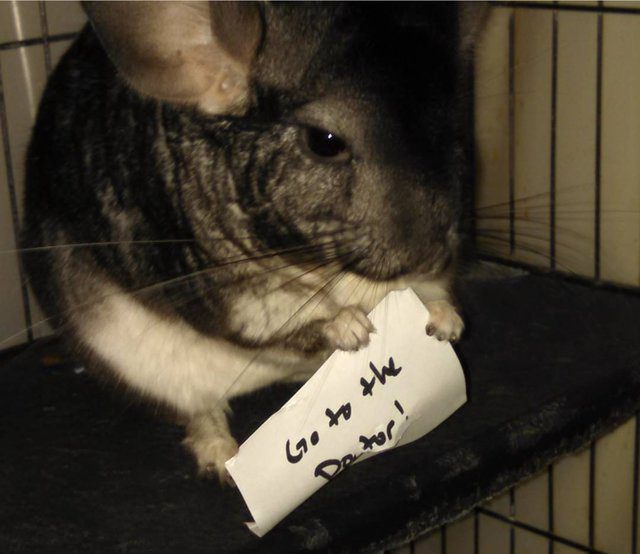 Walker, who teaches a university lab course, recently took the motivational signs one step further. She now sends supportive pictures to her students before they go on important interviews.

“Everybody seems to love the signs, so I try to get at least a few out a week,” Walker added. “I had a student discreetly keep an image up on his phone during a particularly tough job interview, which was sweet to hear.” 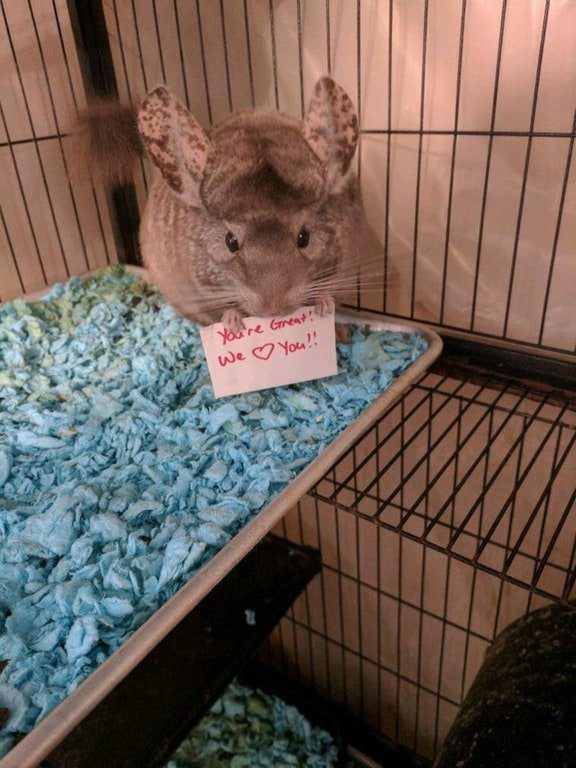 Even though both chinchillas help out their mom, one is certainly more skilled than the other.

“We prefer to get Ari to hold signs because he just wants to hold onto them,” Walker explained. “John tries to eat them, and we don’t want him eating paper.”

Some people may see them as “vermin,” but that couldn’t be further from the truth, Walker explained. “Chinchillas have long life spans and super cool, very developed personalities, and make great companion animals if you’re patient with them,” Walker added. “Also, chinchillas are beautiful and ridiculous and a ton of fun to watch.”