All animals on Earth are pretty amazing in their own way, but sometimes, one of them comes along that causes an immediate stir — and makes everyone fall in love.

Such was the case with an eye-catching bottlenose dolphin spotted in the brackish waters of Lake Calcasieu in Louisiana.

Dubbed “Pinkie,” the dolphin has become beloved in the area, with people snapping photos whenever she’s spotted.

She’s also caught the attention of scientists, who are interested in her pink coloring. The general theory is that she’s albino, but she’s an especially bright pink.

Albinism, a lack of pigment, can affect any species of animal, and the results are often striking. However, animals with albinism often face challenges because they can’t camouflage as well, which makes both hunting and evading predators harder. Recently, an albino orca was spotted in the North Pacific, happily living with his pod.

Check out Pinkie below. She’ll make you smile! 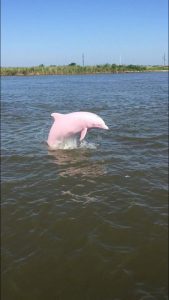 Pinkie the rare pink bottlenose dolphin was recently spotted in Lousiana’s Lake Calcasieu. Although it’s a lake, the water there is slightly salty, so it’s comfortable for a dolphin. 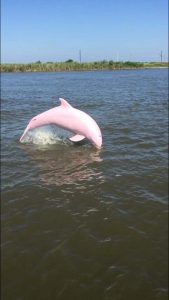 Pinkie was first spotted in 2007, and everyone immediately took her bright pink coloring.

It’s believed she’s albino but is a darker, richer pink than most animals with albinism. But according to Erik Rue, the charter boat captain who first spotted her, she seems perfectly healthy.

“[She’s] a perfectly normal dolphin and does all the things the rest of them do,” he says. 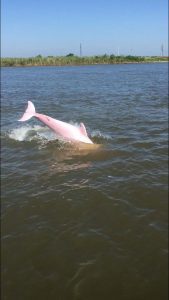 Since she was first spotted, Pinkie has become something of a local celebrity, with people going out on boat tours of the lake just to catch a glimpse of her.

According to Rue, she’s friendly and curious and sometimes gets within as little as five feet of his boat to check out the people checking her out. 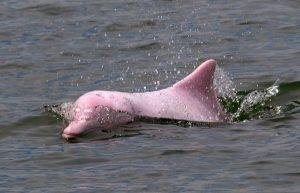 As with many albinoes or differently colored animals, there’s always the concern that they won’t be able to hunt or hide as well as their normally colored friends, due to their inability to blend in.

But Pinkie’s not too concerned about her appearance. She has more important things to think about — like that she might be a mom soon.

Pinkie was spotted in the lake with a male, and Rue caught a few photos of them mating. It’s not known yet whether she’s pregnant, but there just might be a baby on the way. Maybe it will even be pink! 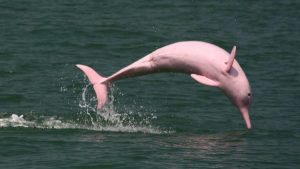 Pink on dolphins isn’t always a sign of albinism. In South America, there’s a species of river dolphin that is naturally pink, and there’s one in Asia, too.

Bottlenose dolphins are also known to have pinkish coloring on their bellies. 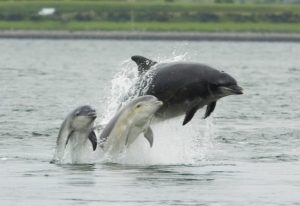 Bottlenose dolphins usually come in gray, but Pinkie is a charming exception, and she’s been delighting people since her discovery.

“It’s interesting to know things like that exist in the world, and it’s really beautiful to see that,” Rue says. He also plans on compiling his photos of Pinkie into a book, so everyone can enjoy her unique beauty.

Check out the video below to see her in action!