It’s absolutely heartbreaking to see dogs who are abused or neglected by their owners, but what is even worse is seeing dogs who are bred and used in puppy mills.

For anyone who doesn’t know, puppy mills are essentially breeding farms for puppies. They’re notorious for their terrible conditions, neglected dogs, and uncaring owners.

At puppy mills, dogs are bred over and over again for the sake of profit. The puppies are often taken from their moms too early, and, due to the awful conditions, there’s widespread illness.

Organizations like the Humane Society of the United States work to shut down puppy mills and rescue the dogs who are held there.

In September 2016, the Humane Society raided a puppy mill outside of Charlotte, North Carolina, and what they saw there was horrifying.

During the raid, rescuers saved over 150 dogs, as well as goats and cats who lived on the property.

One of the dogs was a sweet girl named B.B., who has since become a poster dog for rescued puppy mill dogs.

They saved over 150 dogs, one of whom was a tiny poodle named B.B.

Rescuers couldn’t tell how old B.B. was because of her tiny size, but they could tell she had been bred over and over again. When they found B.B., she was trapped in a tiny metal cage in the basement of a house.

The cage was dirty and the room had no ventilation, which meant B.B. had probably been breathing dirty air for years.

Rescuers could tell from her swollen mammaries that she had given birth multiple times and nursed dozens of puppies. B.B.’s babies had probably been sold by the puppy mill for loads of money — but B.B. was stuck in this dingy basement.

Based on the way B.B. looked, rescuers guessed that she had lived her entire life in the cage, and had probably never seen the outside world. 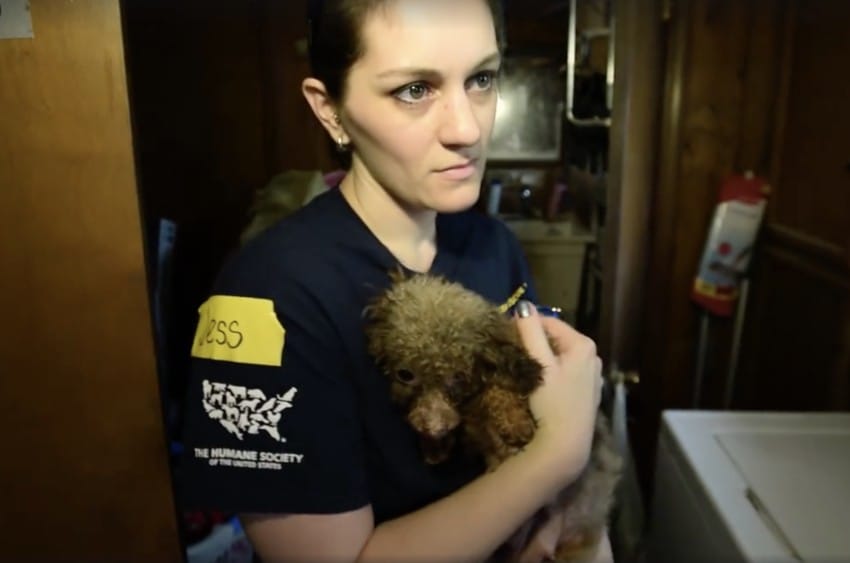 The tiny, pale dog was surprised when rescuers came into the basement, but she seemed interested in them.

It took her some time to warm up to them, but each time they approached, she got a little more comfortable. As always, the rescuers used extreme caution when approaching the dogs — most of them are so deprived of human affection that they’re terrified and defensive when humans come near.

Even though she seemed a little apprehensive, B.B. was responsive to human touch and attention.

Eventually, one of the trainers felt that B.B. trusted her enough to be taken out of the cage. 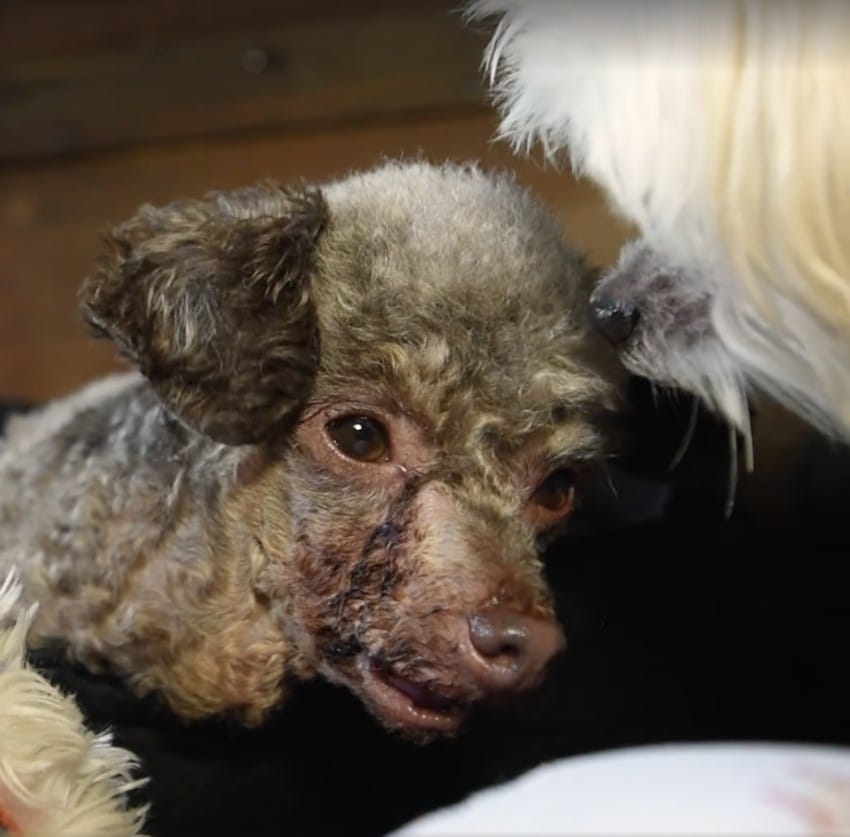 After rescuers got all the animals out of the basement and off the property and shut down the puppy mill, they brought the animals to a veterinary clinic.

At the clinic, B.B. hid in a corner, terrified of the situation. She wouldn’t eat or drink. 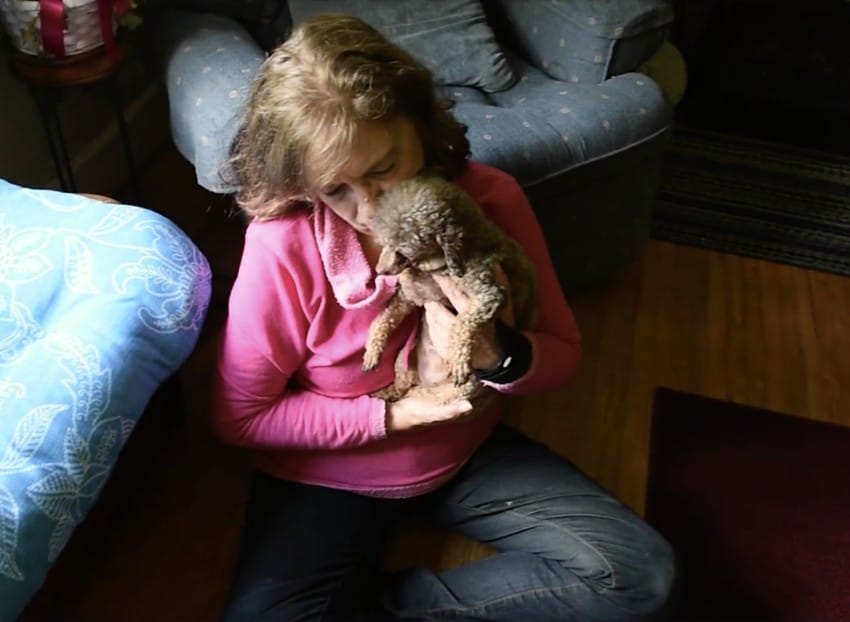 That’s when Brenda Tortoreo, who was a receptionist at the clinic at the time, saw her. She immediately knew they were meant to be together.

Once B.B. was healthy enough to go home, Brenda brought B.B. home to live in a caring, loving household with two other dogs. 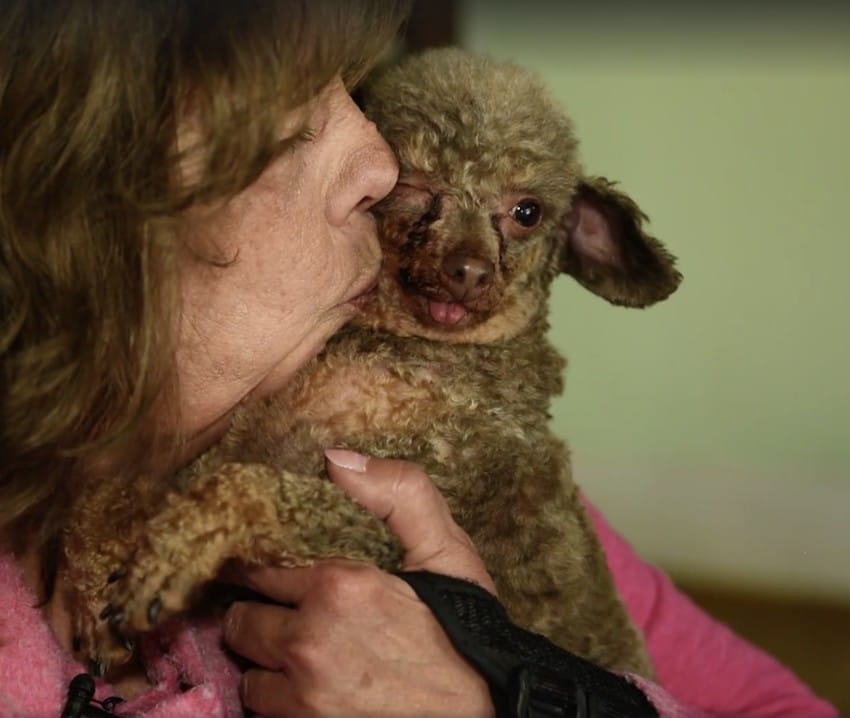 It took B.B. a long time to get used to living in a home rather than a cage.

Brenda said B.B. was scared of everything at first — rugs, doorways, hallways.

She was terrified of the outside world as well.

B.B. had never seen grass or sunlight. Being outside was overwhelming for the little dog.

Eventually, B.B. started to get more comfortable around the house.

She found solace in her stuffed animals, and she would bring them to bed with her and care for them like they were her puppies.

Now, B.B. acts like any other dog — she runs around outside, eats lots of food, and loves playing with her doggy siblings. 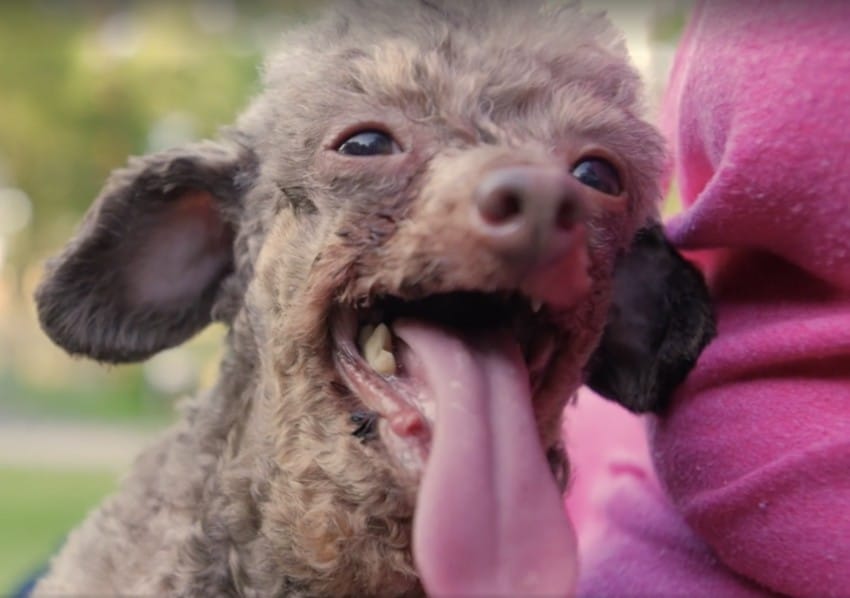 B.B. truly found the perfect forever home with Brenda, and we can only hope that the other rescued puppy mill dogs were just as lucky.