Today in actual legitimate heroes, an Alberta man used lukewarm coffee to save the lives of three young cats who somehow all got their tails stuck in ice near the side of a road. 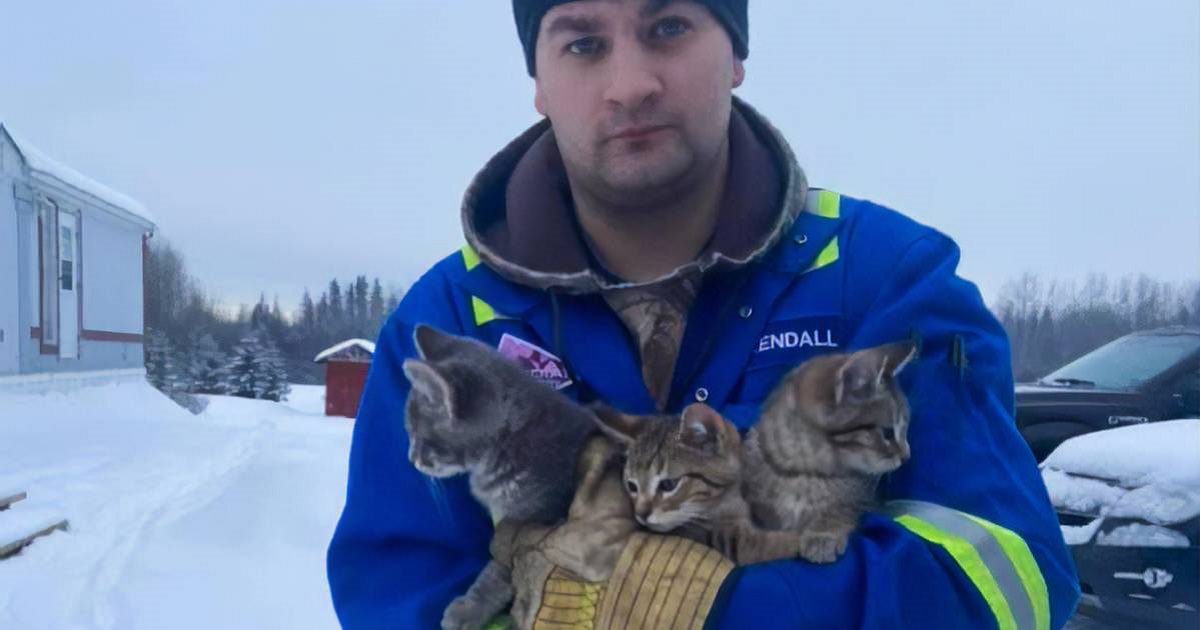 Kendall Diwisch, who works with wells near Drayton Valley, says he was driving on a back road near one of his work sites when he found the three little kittens “frozen into the ice.”

“Look at these little guys!” says the kind-hearted man, filming as he walks toward three mewing kittens trapped together in the snow. “It’s alright. it’s okay… you’re frozen to the ice! You’ve been here all night?”

One kitten’s tail popped right out of the ice with a bit of help from Diwisch, but the other two were really stuck.

Unable to free the crying kitties, Diwisch went back to his car for the only warm liquid he hands on hand: A thermos of coffee (which definitely had milk or cream in it, based on the cats’ reactions.)

With a little bit more wiggling and some crying from the cats, who are clearly quite hungry and uncomfortable, Diwisch manages to get them all free and carry them back to his truck.

“Took them home fed and watered them they look to be healthy and friendly,” wrote on Diwisch of the cats on Facebook when sharing his video, which has been viewed nearly 70,000 times in less than 24 hours.

“If any friends are looking to have a new addition in their family, let us know as they will need homes,” he wrote, noting that it was likely someone had dropped them off in the middle of nowhere.

“All three look to be males, and we also gave them dewormer.”

Lo and behold, someone opened their home and heart to the kitties right away.

“All three little rascals went to their new home today where they get to be together instead of separating them,” wrote Diwisch in an update on Wednesday.

“All three are eating and drinking and very energetic. Thanks for everyone’s consideration and offering to take them very appreciated.”

Hundreds upon hundreds of people have commented on Diwisch’s post to thank him for his kindness and praise him as a hero, which, journalistic impartiality be damned, he totally is.

Some commenters are furious with the monster who left these cats to die and want them to be punished, but for the most part, people are simply so happy that Diwisch found and rescued them.

“Someone gets this man a limitless Tim’s card,” wrote one poignantly. “Not all heroes wear capes.”