Before Hurricane Irma hit Florida, people throughout the state started preparing their homes and yards for the incoming storm.

Even people who weren’t in evacuation zones knew they should remove debris from their yards, board up their windows, and get their houses prepared for rain and flooding.

One woman started getting her yard ready when she noticed a skinny white dog across the street. She called to the dog, who quickly ran over to her house and walked right onto her porch.

The woman told the dog’s story on Imgur, where she touched thousands of people’s hearts. She wrote:

While I was out prepping our yard for big Irma badness here in central Florida I saw this sweetie across the street. I called to her like I would any dog and she cautiously walked over.

Even looked both ways before crossing the street. She’s a smart cookie.

She let me pet her a bit but looked pretty nervous at any loud noises or if I moved too fast. 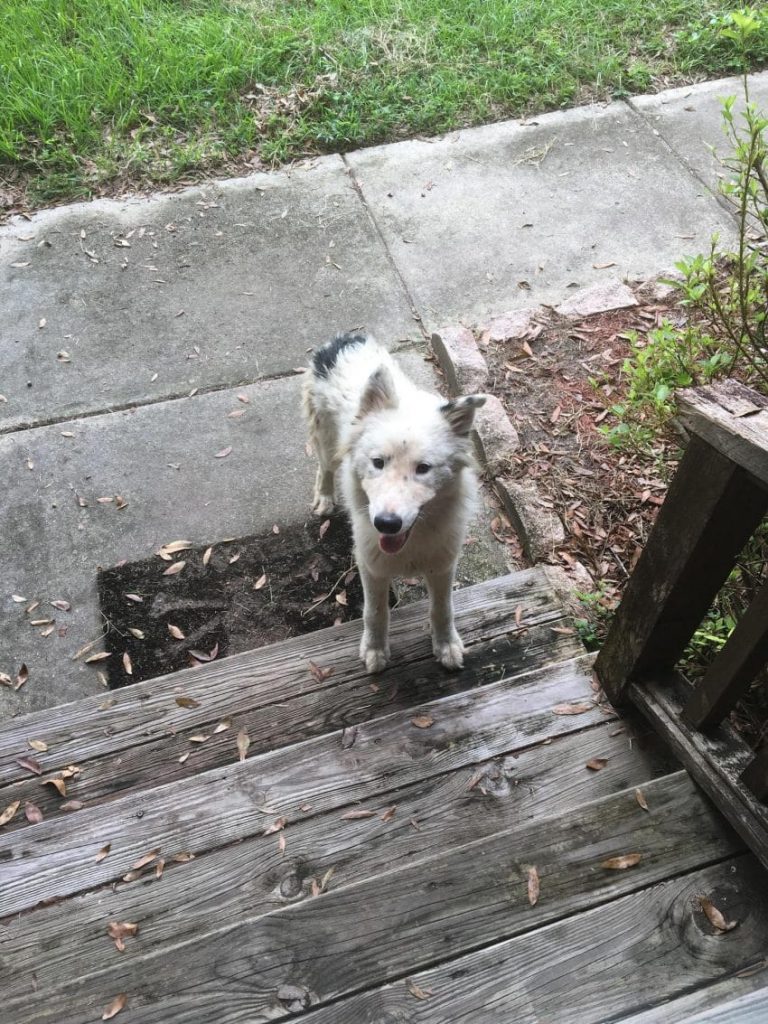 I went inside and got her a bowl of dog food and some water.

She scarfed it down with such ferocity. She went through three bowls of food and two cups of water before taking a breath.

And each time I went back in the house she waited patiently for me to come back out. 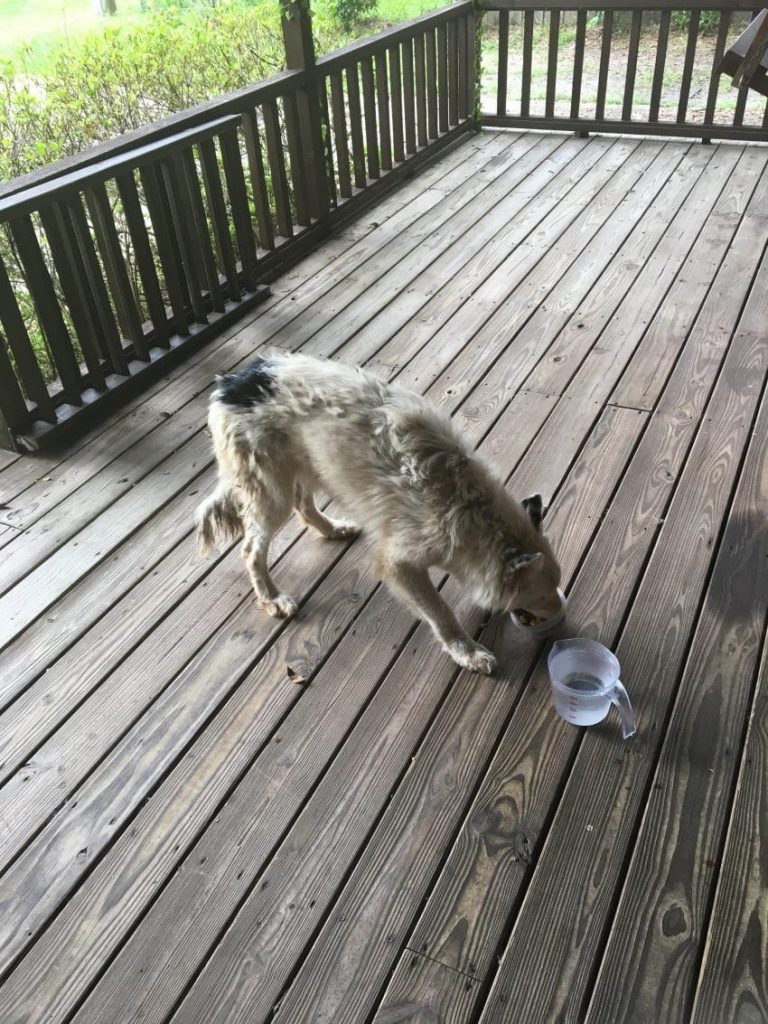 She got pretty snuggly after being fed. As fast as even putting her paw on my arm and dragging it back to her chest whenever I paused for a moment.

Look at that smile. I knew I couldn’t leave her outside with the storm coming so I held the door open and asked if she wanted to come in.

She hesitated for just a second and then trotted inside to meet my doggo and two cats. 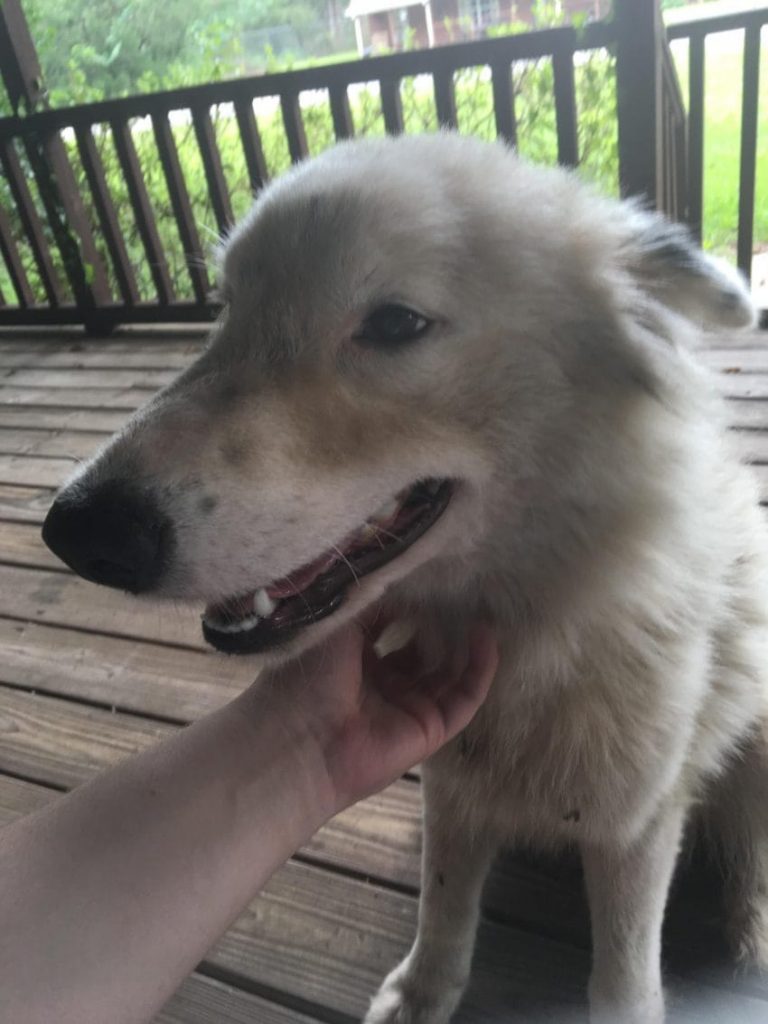 That’s when I really got a good look at her. She was filthy and smelled to high heaven.

Almost every bit of her fur was matted with dirt or feces. She wouldn’t let me touch her ears but I could see massive matts behind them that had to be so painful too.

I even discovered that she had sat in tar at some point and she was very cautious of me going anywhere near that side of her body. 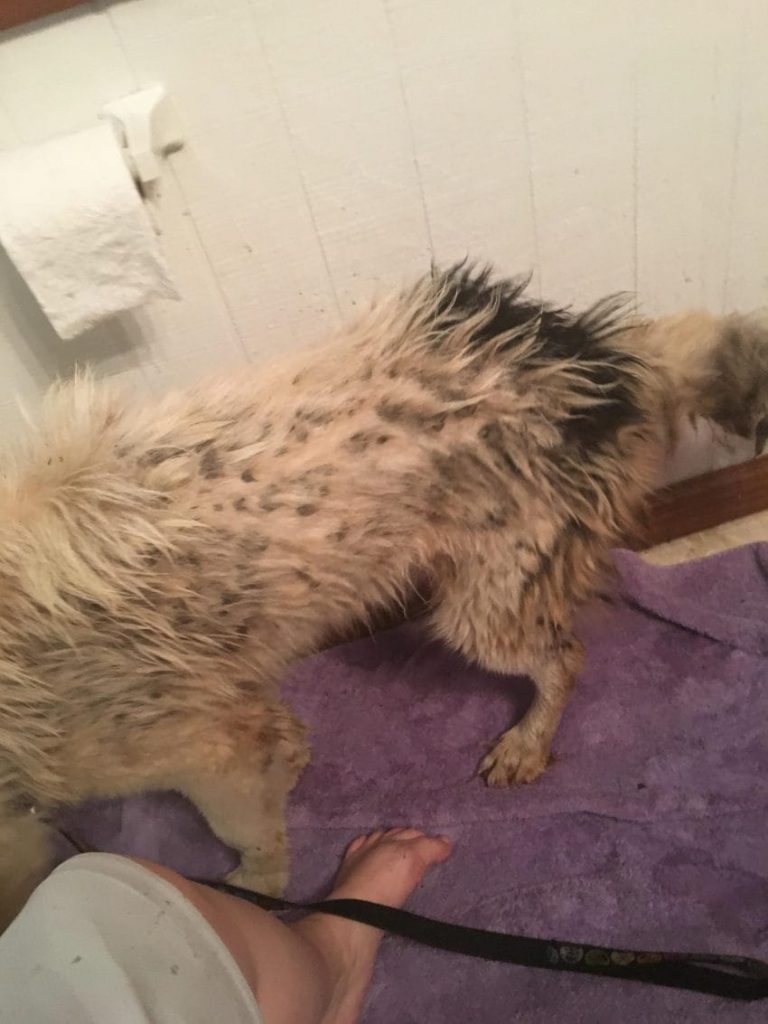 I got her calmed down and just sat on the bathroom floor with her for ages. She finally let me check her ears and feet.

I didn’t notice until then that her paws were bleeding. (She’d left bloody paw prints in the living room for me to find later.)

So I attempted the first bath. It didn’t go so well. She was a nervous wreck. She trusted me enough to pick her up and put her in the tub but as soon as the water came on she barked and cried. Only managed to clean the top of her back before we both needed a break. So she came and sat on the couch with my doggo Arthur.

He didn’t take his eyes off her for the longest time but eventually, they snuggled together to nap. 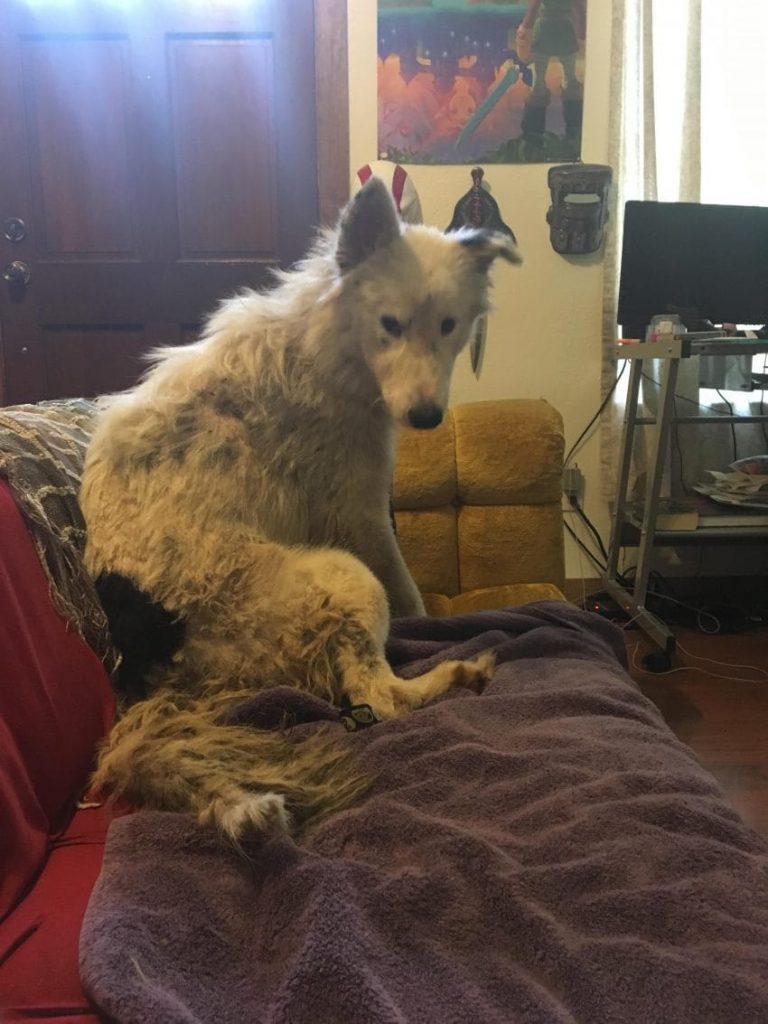 The look on her face when I said it was time for another attempt at a bath. This time I took the hair clippers to her first. She hated the noise but allowed me to cut away most of the matts.

I still couldn’t go anywhere near her ears though even with just scissors. It took four hours of cutting and scrubbing. To get her to a reasonable state.

The hardened tar was so difficult to get off her backside. I ended up needing to shave away so much of her fur before it was all said and done. 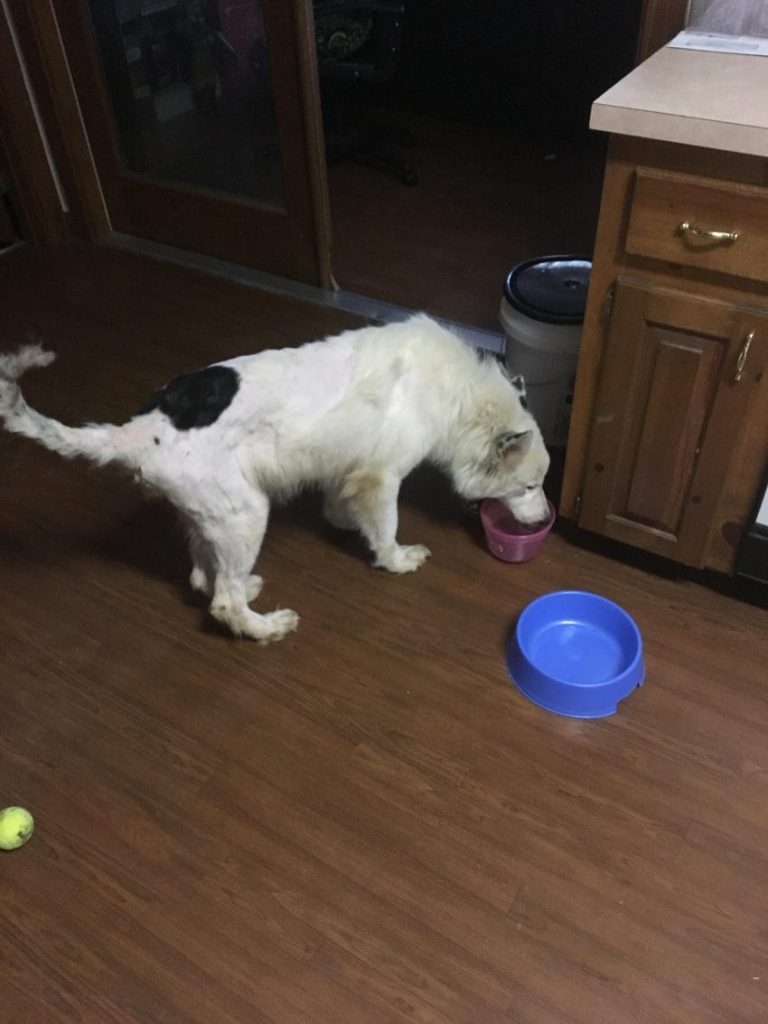 Here she is fresh from the bath enjoying a little more food. I hated that I had to shave her tail too because the fur was so long but there was no way to save it.

First, run through the backyard. She was so excited she took off and circled our shed before running back to me like she wanted to make sure I was still there. She even brought me sticks she found and wanted to take back inside. 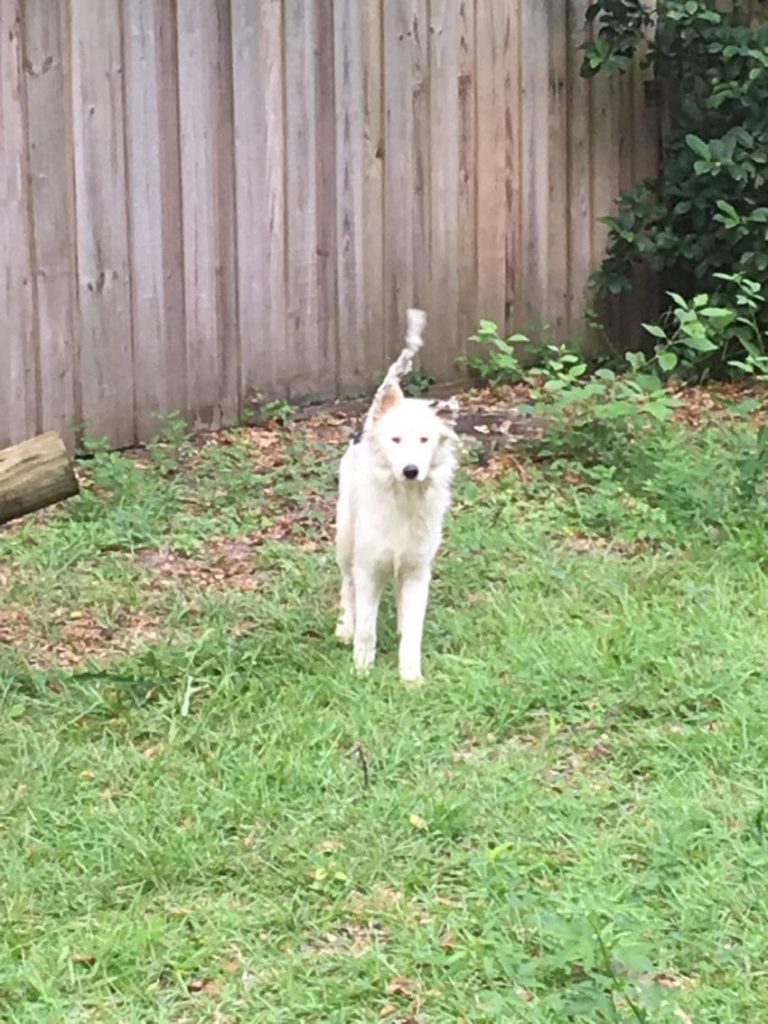 I got her to a vet yesterday afternoon. She has no chip. They said she’s probably a husky/wolf mix. And that she’s very young. Maybe even less than a year old.

She’s obviously been on her own for a long while though. 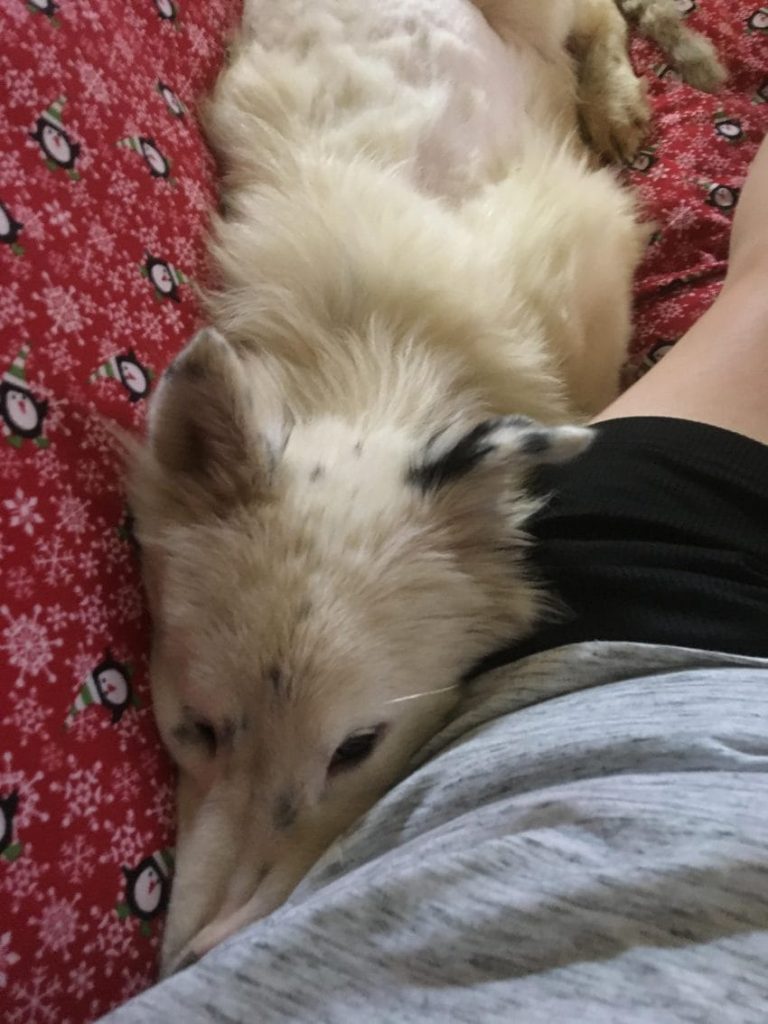 She’s a snuggler. Pretty much anytime I sit down she wants to be in my lap. And she howls outside the bathroom door while waiting for me. We managed to hold her long enough to chip behind her ears finally.

Once she realized we were helping not hurting she stopped fighting us. It must have felt so good to have those matts released from her pulling her skin. I posted all over social media trying to find an owner in hopes that she was loved. After navigating my way through three different scammers (there are a dogfighting and dog sale profiting problem in our area) I managed to find her original owners who had this pic of her as a puppy. They lost their apartment and couldn’t take her with them when they moved.

They gave her to a couple they thought would care for her but I managed to get ahold of them too. They gave her away shortly afterward also.

I found one person who said that she had been her boyfriend’s dog. And that her boyfriend couldn’t keep her so they let her out of the truck on the side of a road. A month. In a different city. That just broke my heart. 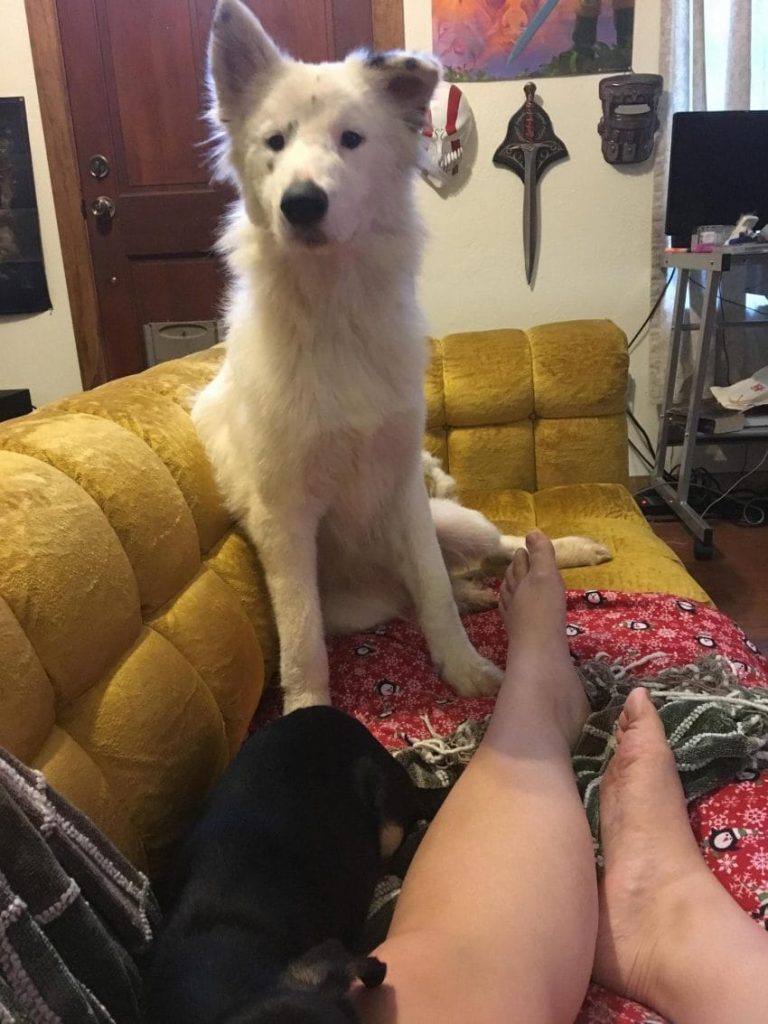 After much deliberation and several offers from dog lovers here in town, we decided to keep her!! She is just so loving and grateful. She makes a perfect addition to our family.

The look on her face the first time I called her name. We named her Amaterasu or Amy for short. She’s already responding to Amy like she was born to it. 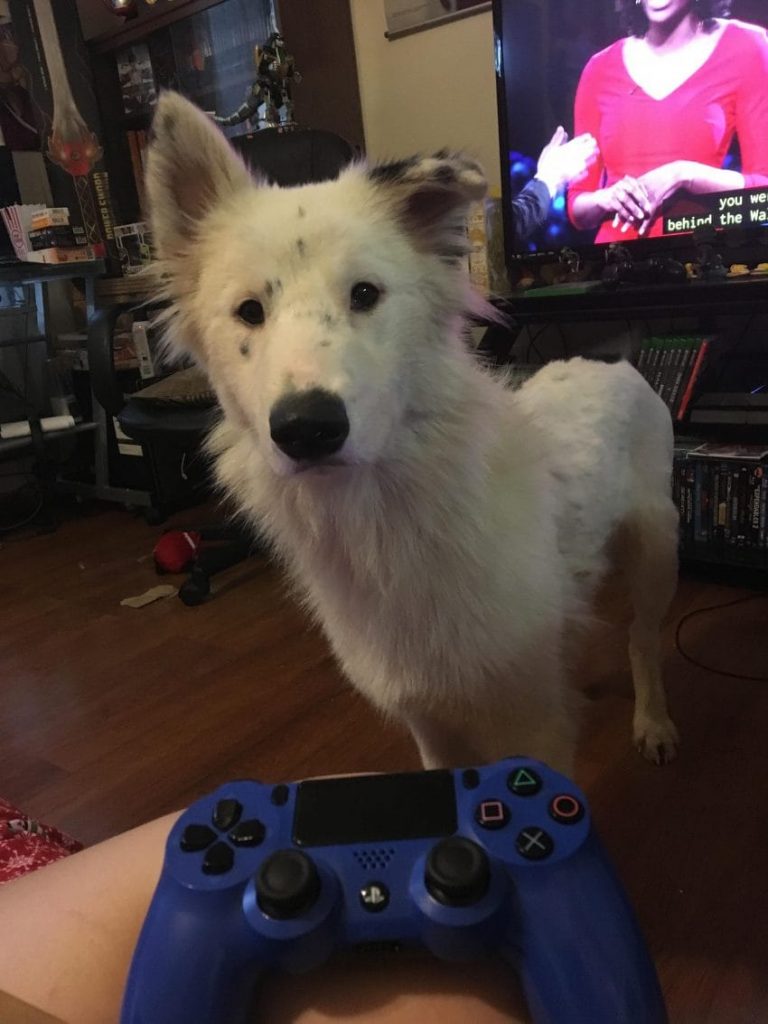 After her first post, Amy’s new owner shared an update on Imgur, writing:

She has some serious separation anxiety and must always be touching someone. We’ve gotten her crate trained for when we leave the house but she starts to howl as soon as we come back in, eager to be loved.

She and Arthur are buddies. She likes to snuggle up to him when she isn’t trying to gnaw a leg off in an attempt to get him to play with her. 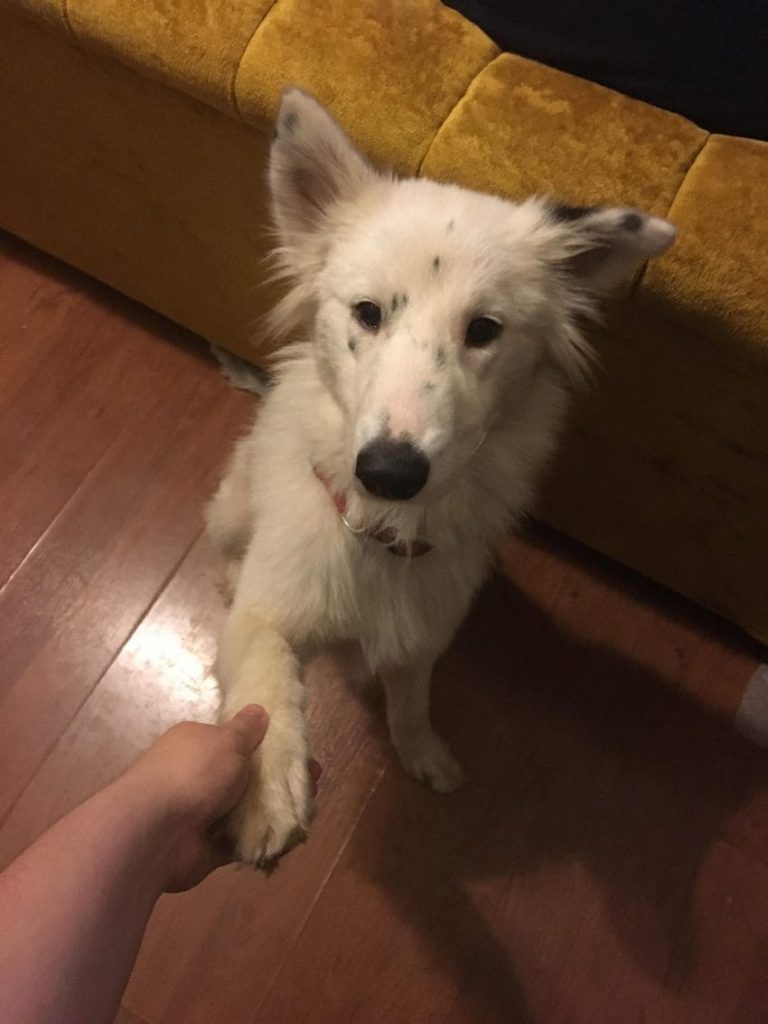 So far we’ve learned Sit, Shake, and Shut Up.

Vet visits have gone well too. She was majorly malnourished as you can see here. But she’s quickly gaining weight now and her fur is growing back in.

No more bald spots! We had to shave so much fur to get rid of the mats but now it’s all growing back in and she adores her daily brushing sessions. We are so grateful! After our last post, several people donated their hard earned money to help us get started and every little bit has helped. One user even mailed us a care package from Amazon with a giant bag of dog food and chew toys!!!

And all the messages! I sat and read through all 1200+comments on the original post and the flood of PMs. It just warms my heart to see so many people love Amy too.