In October 2017, Chelsea Nobel woke up in the middle of the night with a sinking feeling that something was wrong. She immediately looked over to where her 2-year-old son, William, was sleeping and saw he was gone.

After frantically searching her home, Chelsea called the police. Thus began an extensive search for the missing boy in and around the Mississippi community.

Helicopters, K-9 units, and volunteers spent hours searching the heavily wooded area, but William was nowhere to be found.

Then, authorities spotted a set of tiny footprints in the woods. And every time they discovered what they assumed were William’s footprints, they found a second set of prints — only these prints belonged to an animal.

As it turned out, William definitely wasn’t alone in his disappearance… 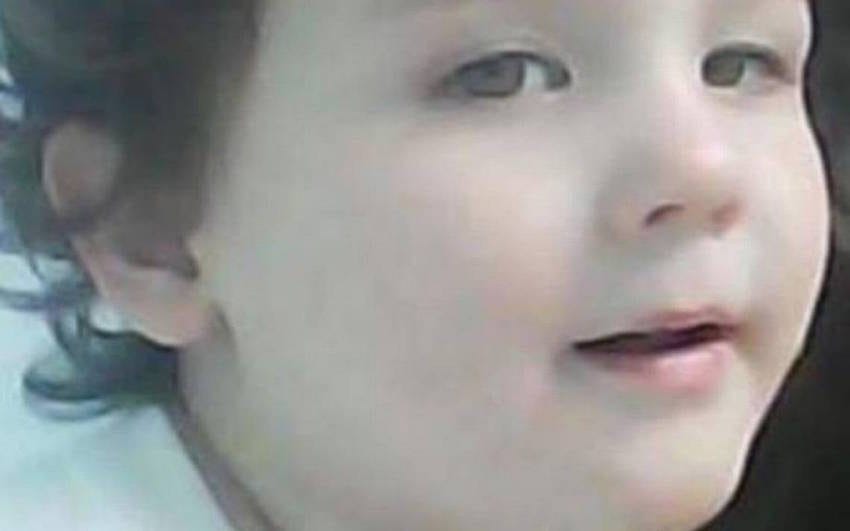 In October 2017, Chelsea Nobel awoke in the middle of the night to find her 2-year-old son, William, missing from his bed. 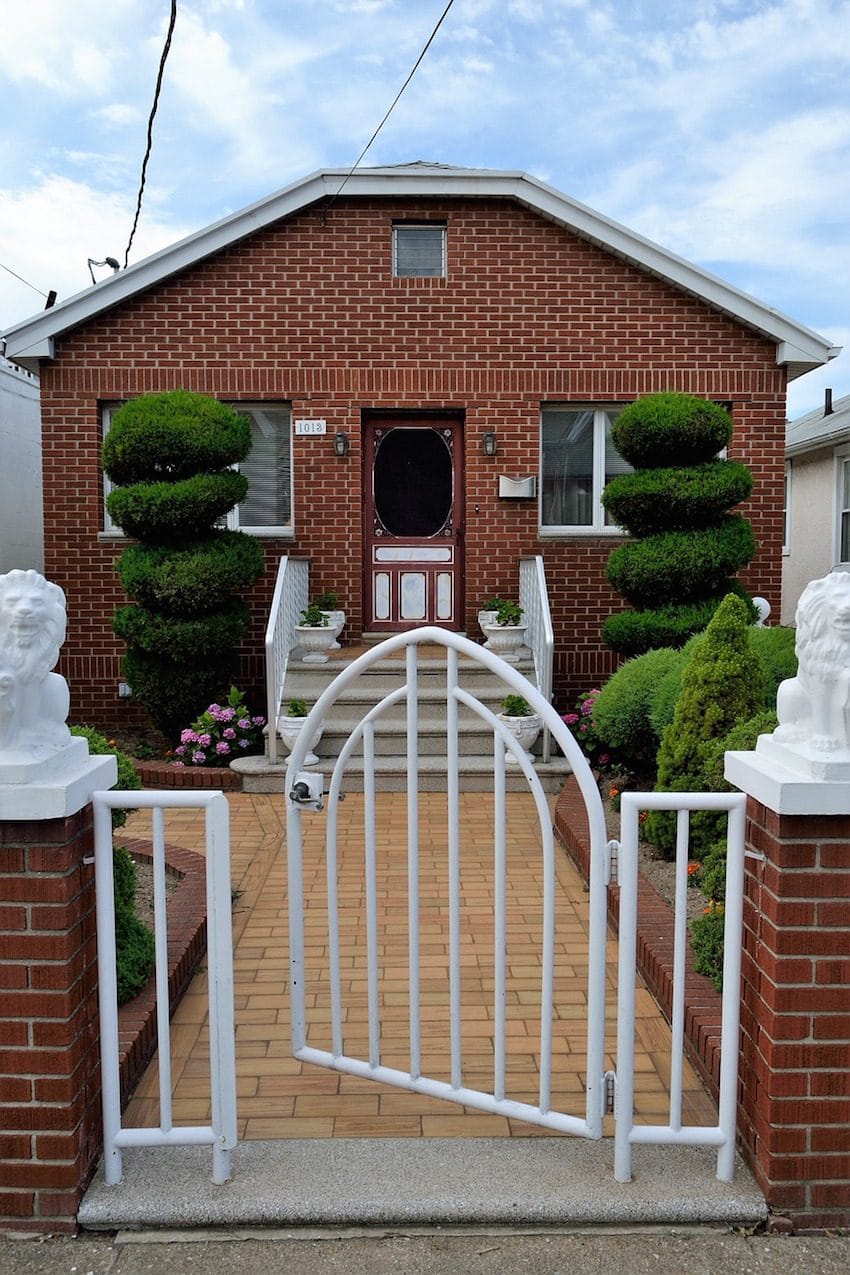 It seemed like William had somehow gotten up in the middle of the night and wandered off, though no one could be sure at the time.

The frantic mother called the police and an extensive search began in Harrison County, Mississippi. 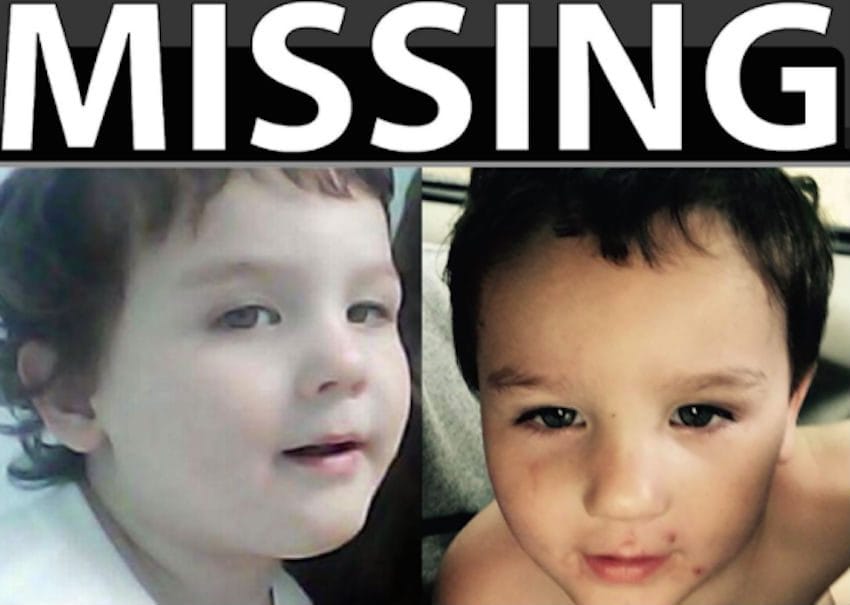 The tireless effort included K-9 units and ATVs from the Mississippi Department of Wildlife Fisheries and Parks. 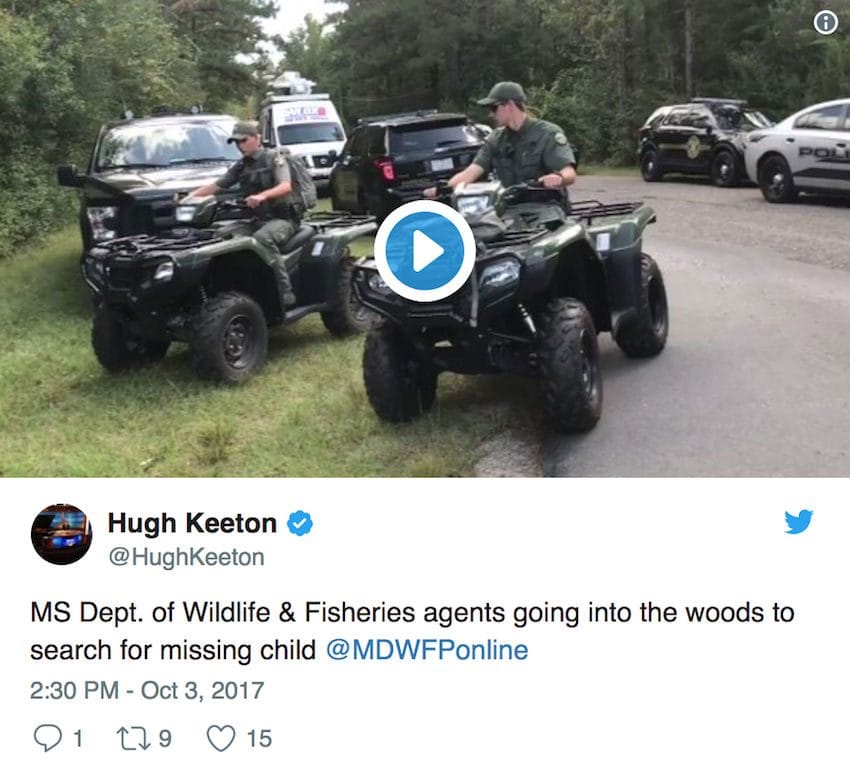 Police, neighbors, and volunteers searched the woods for hours, but there was no sign of the little boy. 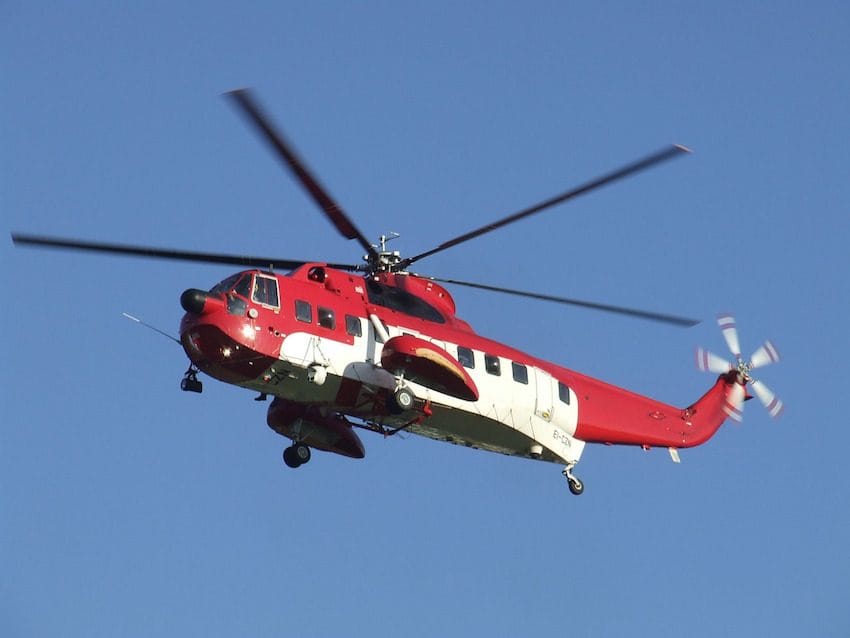 Not even the sheriff’s department helicopter could find him. Eventually, authorities found a set of tiny footprints that had traveled through the woods.

Then, they noticed something else. 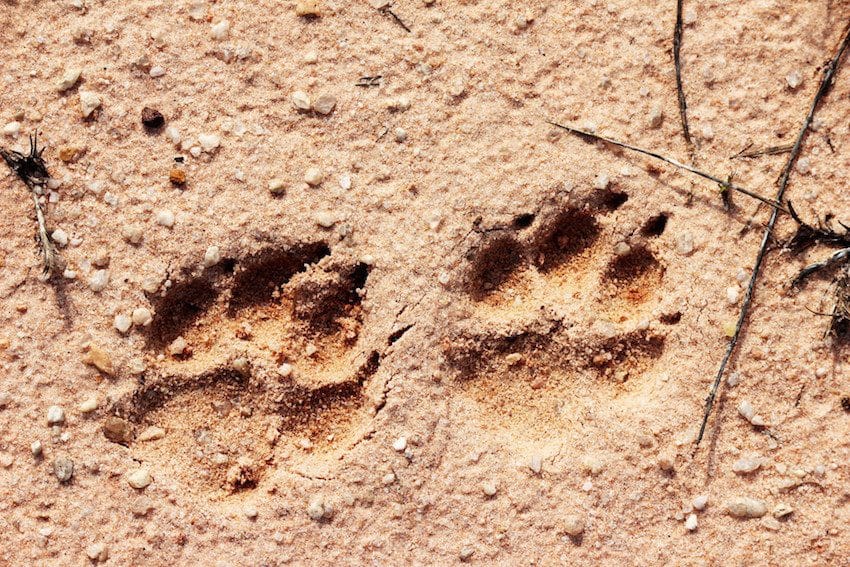 Every time William’s footprints were spotted, a second set of prints were found alongside them.

But these prints belonged to a dog. 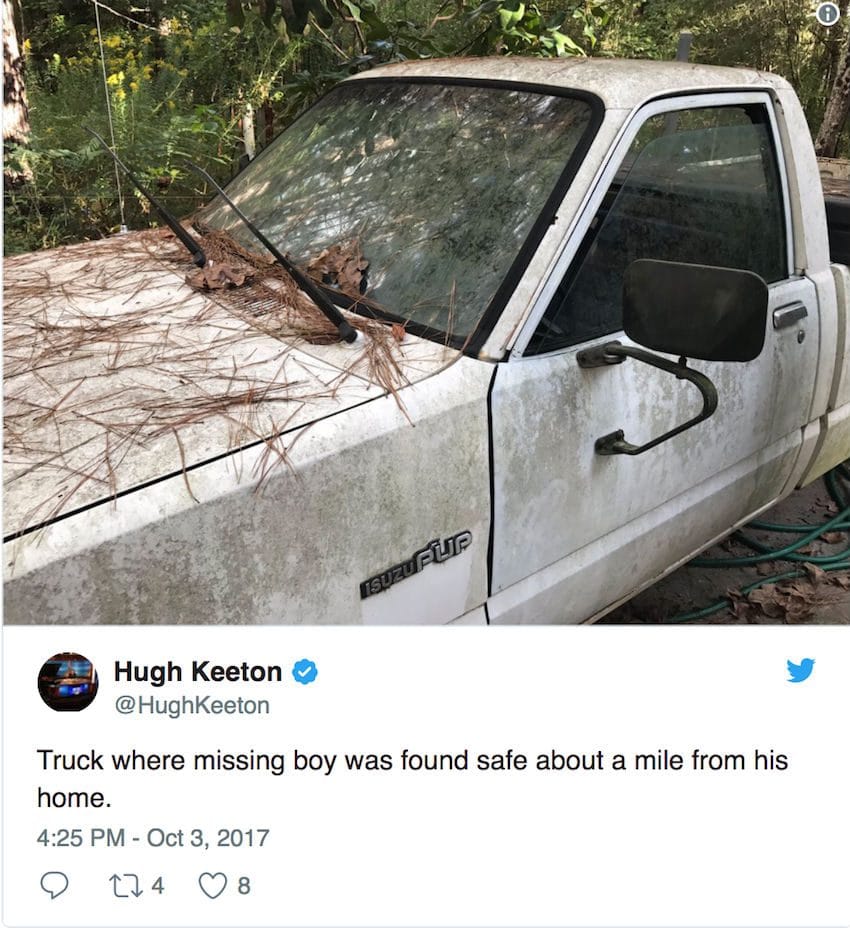 Hours after William’s disappearance, a 10-year-old boy named Blake Carroll was arriving home from school when he heard the horn beeping from inside his uncle’s old truck.

Blake noticed a dog circling the truck, desperately trying to get inside. The boy peered through the windshield, and there was William: crying and pressing the horn.

Blake called his uncle for help, and they pulled little William to safety. 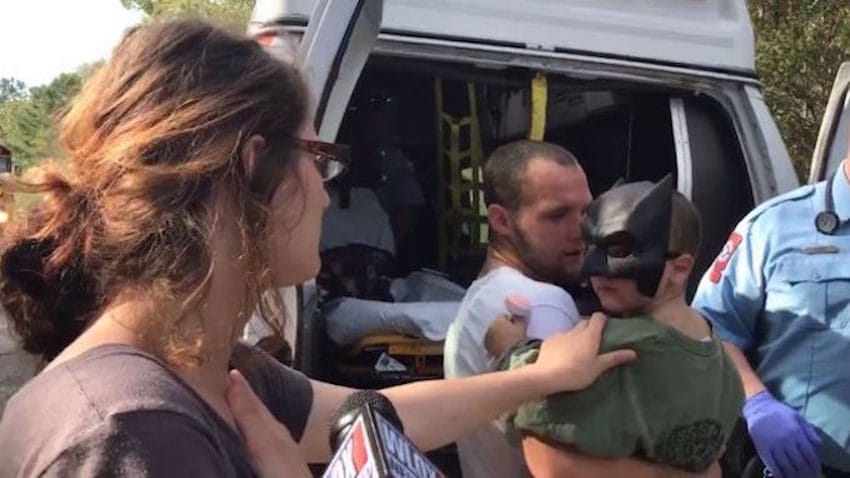 Authorities quickly arrived, and the search was called off.

Aside from some bug bites and scratches, William was unscathed from his late-night journey. William is mostly nonverbal and is being tested for autism; he may not have responded if and when nearby searchers called his name.

The emotional mother broke down in tears upon reuniting with her son. 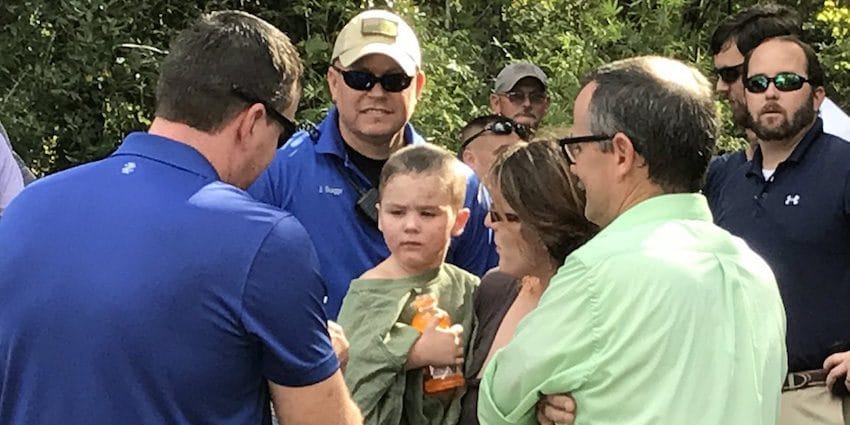 However, Chelsea was charged with misdemeanor child neglect. Investigators determined she was not properly supervising William at the time he wandered off. 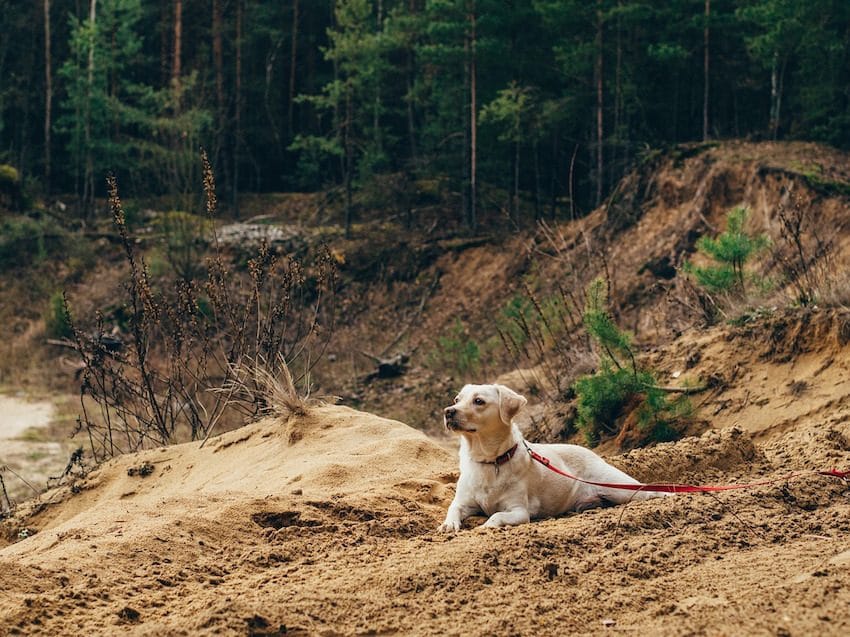 The sheriff’s department has hailed the dog — named Jezebel — a hero for staying by William’s side the entire night. They say she kept him protected for those seven terrifying hours.