Home
animals
Couple Travels The Country With Their Precious Animals

Cate and Chad Battles had moved around a lot when they were growing up. They met and got married in Asheville, North Carolina, where they ended up settling down. For many years it was difficult for them to travel because of their commitments to the bar they owned and the kids they were raising.

However, now that the kids are grown and the business and house are sold. That’s when they decided to make the travel-bug the governing force of their lives. Because they had two beloved pets, a goat named Frankie and a dog named Maggie, that did not stop them. 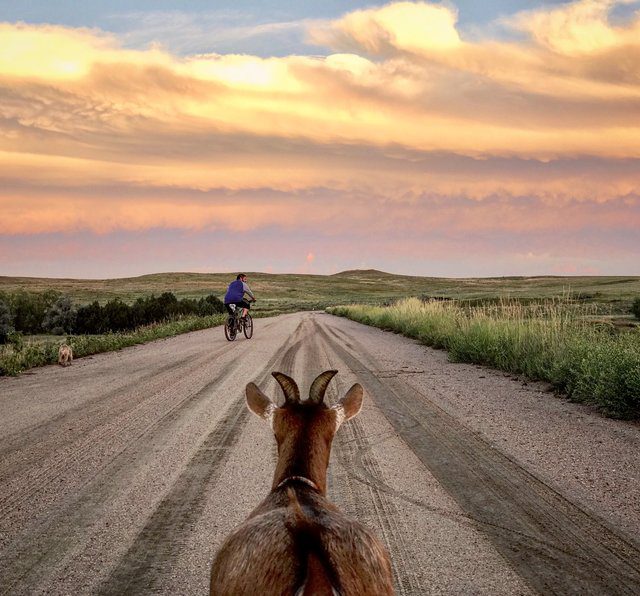 Cate, Chad, Frankie, and Maggie for the past year and a half, have covered over 30,000 miles in their beloved vintage Airstream trailer, that they’ve made into a moving work of art. 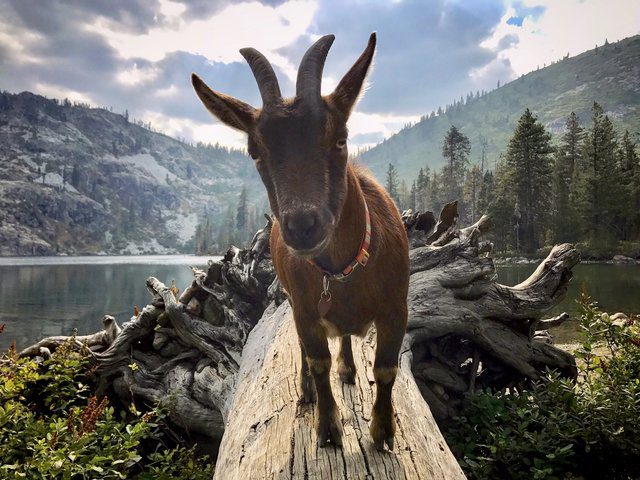 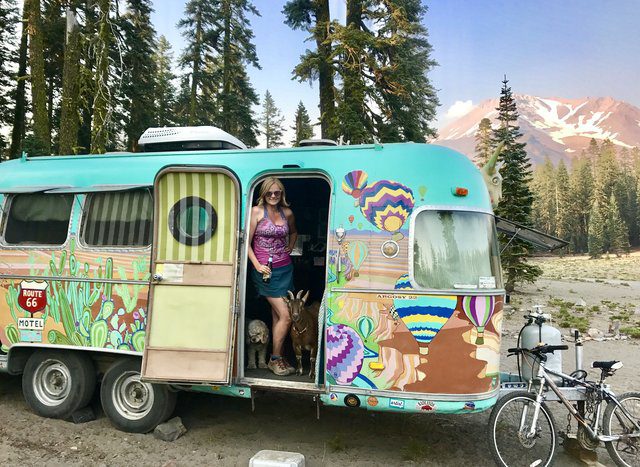 “Travel had always been a big part of our lifestyle, but between raising kids and juggling an extremely busy bar, vacations and quality time alone were few and far between,” Cate said. “We wanted the freedom of life on the road, to live in the moment, and to have a fresh start on life. We are always looking forward to the next adventure.” 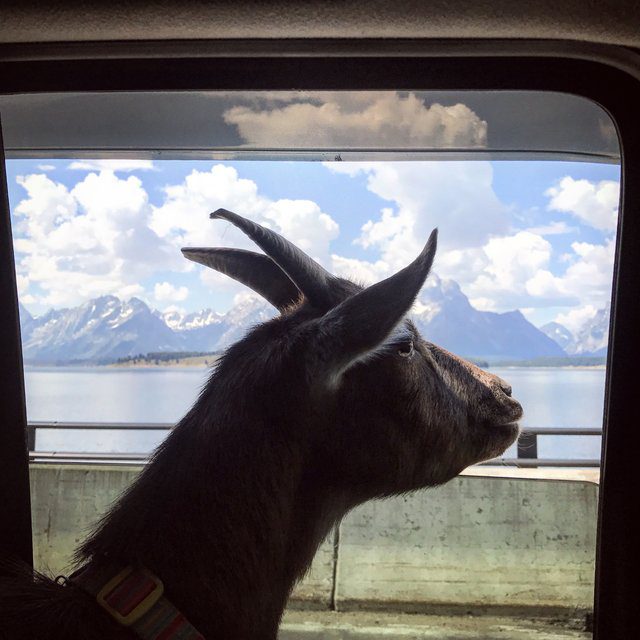 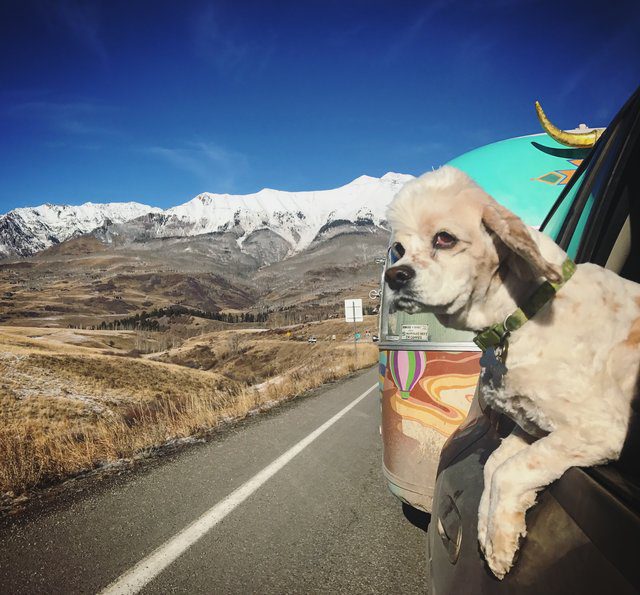 Frankie, the goat, joined the Battles family four years ago when she was just a baby. The Battles had two other senior dogs, and the pygmy/Nigerian mix grew up as part of the pack.

Maggie has been part of the family for 12 years, since she was a puppy.

“Animals bring so much joy into our lives, I can’t imagine living a life without them,” Cate said. 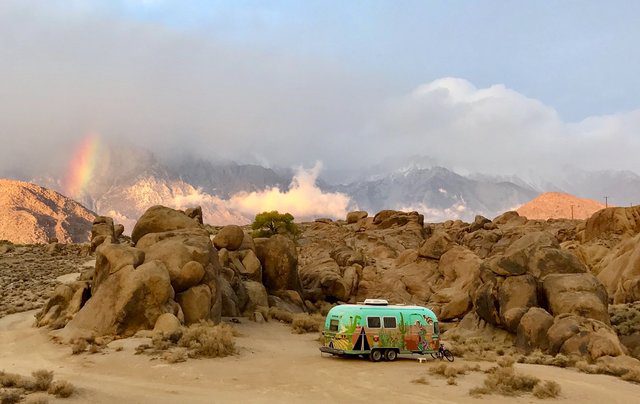 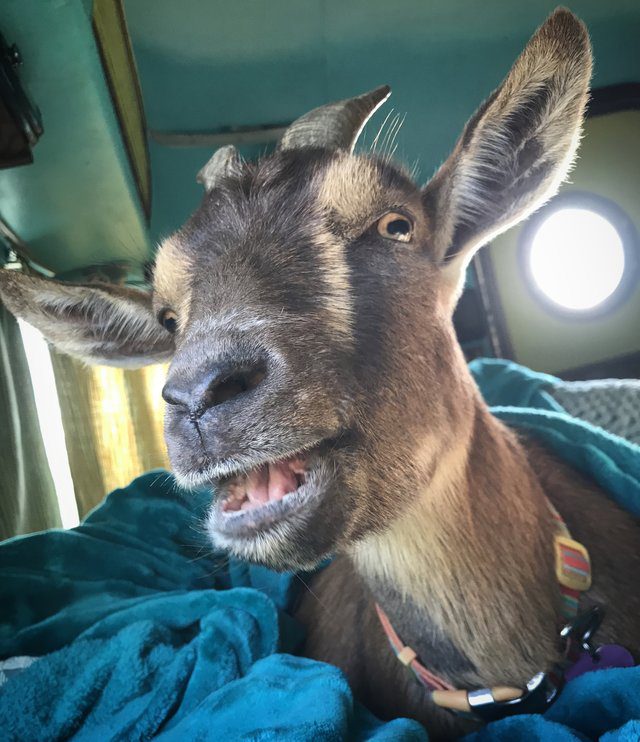 Cate and Chad decided to go on the road full-time, and bringing Frankie and Maggie was a no-brainer. They are quickly learning how to adjust to life in such a small space with three different species. Frankie and Maggie, though very different personality types in addition to being different kinds of animals, have a particularly sweet understanding of each other. 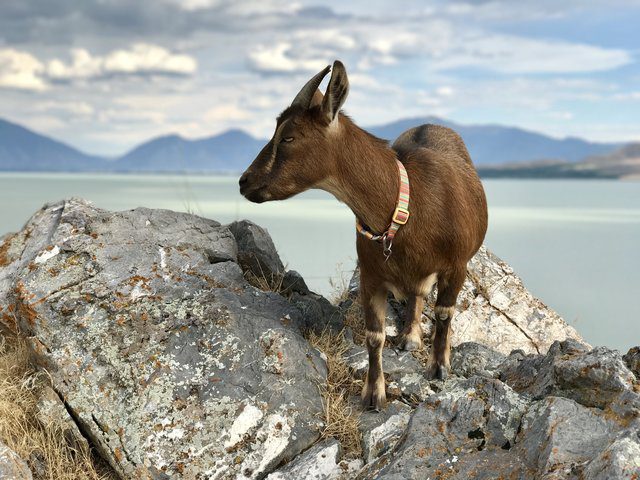 “It’s a relationship of mutual tolerance,” Cate explained. “Maggie is very easygoing but Frankie is a diva. While we are on the road, they sleep together in the back seat and sleep in our bed inside the camper. They are both very snuggly and affectionate.” Cate suspects that both Frankie and Maggie prefer humans over each other. Frankie even seems to prefer people over other goats. “We take Frankie to have playdates with other goats, which is super entertaining to watch,” she said. “But at the end of the day, she’s still more of a ‘people goat.'” So far, the Battles have visited 28 states, two countries and so many state and national parks that when asked which ones were most memorable, it’s hard to even pick one over the other.

“Seeing the total eclipse in the Tetons was pretty amazing,” Cate said. “Frankie loved the flora and Maggie loved swimming in the lakes and creeks.” Frankie loves to climb, and so naturally gravitates toward rocky landscapes, like the Alabama Hills outside Lone Pine, California. “There are so many wild rocks to climb and crevices to explore,” Cate said. The Battles have discovered there are some challenges in traveling with pets.

“The biggest challenge is that there are no pet-sitters on the road so they are pretty much always with us when we travel,” Cate said. “That just means we’ve had to become better planners.”

Most national parks aren’t pet-friendly, the Battles let Frankie and Maggie enjoy the landscapes on the peripheries of the parks. “We will take the animals for a hike just outside of the borders and then take turns to see things inside the park,” Cate said. “Definitely not always convenient, but they make the adventure more interesting and they both love to hike.” Having Frankie and Maggie along for the ride ultimately adds to the couple’s experiences, especially since Cate is an artist and photographer. She documents the wild beauty of the landscape and seems to see her unique pets as an important part of the picture.

“We’ve been very fortunate to see so much of the beauty this country has to offer,” she said.