This past week, one hilarious family had the whole internet in tears of laughter after a beautiful flower arrangement arrived at their door — addressed to the dog.

The Cardone family went viral after mom Debbie Cardone opened the door and found a bouquet delivery from her husband. Understandably, she thought the flowers were for her.

However, she quickly realized her husband had a different sweetheart in mind. The arrangement was addressed to Sebastian, the Cardones’ 10-year-old bulldog.

Fortunately, Debbie has a great sense of humor. Like the mom who embraced her daughter’s “exhausted mom” costume, Debbie just rolled with the joke. She even posted it on Facebook, cracking up her friends in the process!

But the story didn’t really get going until the Cardones’ teenage daughter took to Twitter.

Lily Cardone used the social media platform to share what really happened when Sebastian the bulldog’s special flower arrangement arrived at the door. 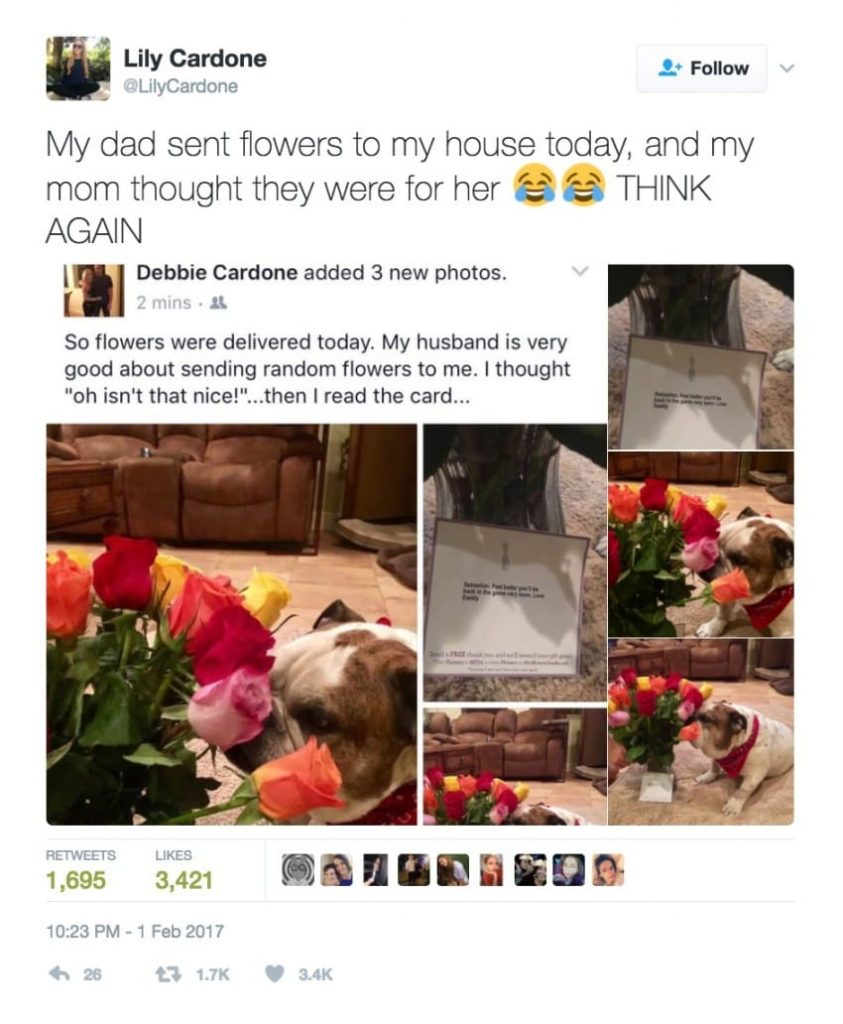 College student Lily Cardone accidentally made her dog a superstar this past week when she took to Twitter to share a funny story about her parents, a flower delivery, and the family’s 10-year-old pooch, Sebastian.

“My dad sent flowers to my house today, and my mom thought they were for her,” she wrote on Twitter. “THINK AGAIN.”

The tweet took off in a big way, and has already been favorited and retweeted thousands of times! 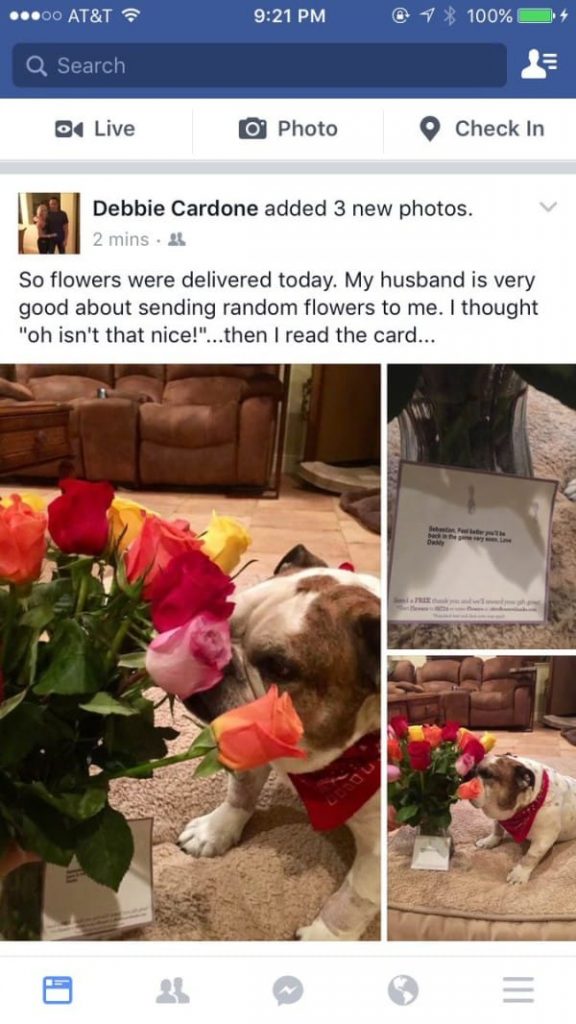 Mom Debbie Cardone started the conversation off when she took to Facebook and posted some pictures of a beautiful flower arrangement.

The flowers were sent by her husband, so it would be easy to assume they were meant for his wife. That’s certainly what Debbie thought… at first.

“So flowers were delivered today,” she wrote on Facebook. “My husband is very good about sending random flowers to me. I thought ‘oh isn’t that nice!’…then I read the card…” 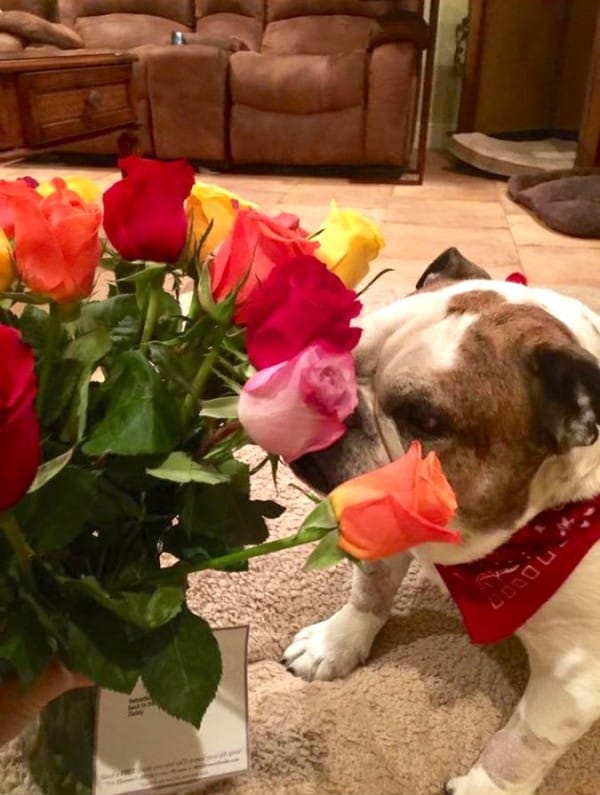 Debbie checked the flowers all over for her name or a message from her husband, who works overseas for long stretches of time, according to the Dodo. 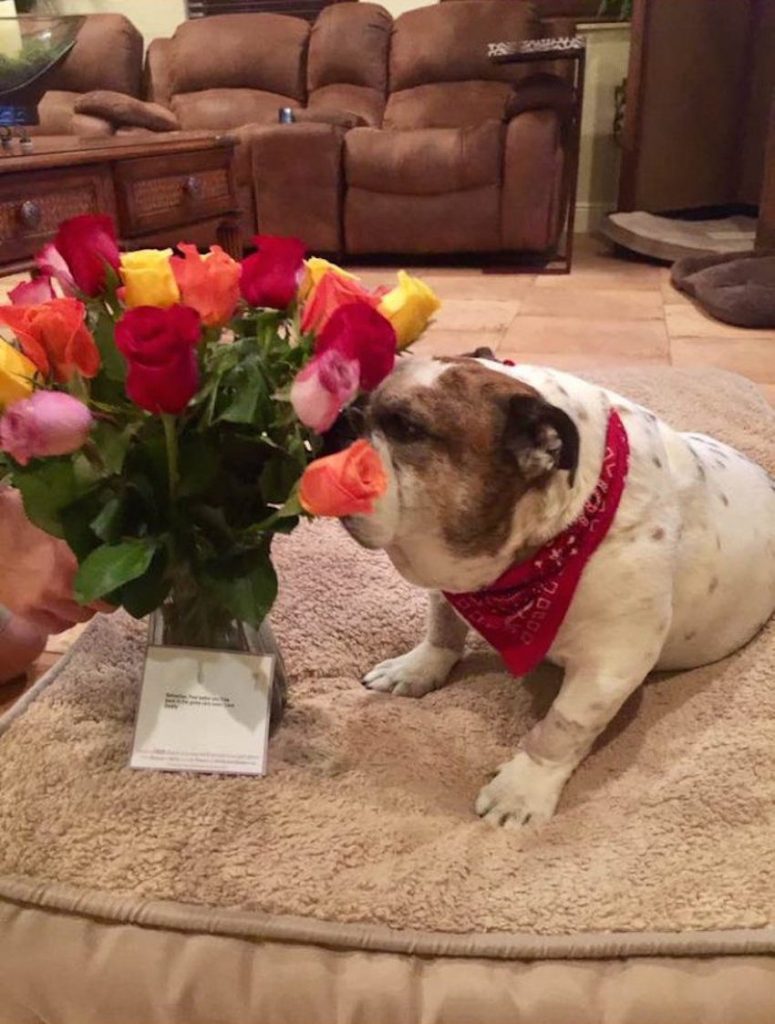 She explained that when he’s gone, it’s not unusual for him to send flowers home every now and then to show he’s thinking about her.

However, in this case, the flowers were directed to a different family member, the Cardones’ very appreciative bulldog, Sebastian! 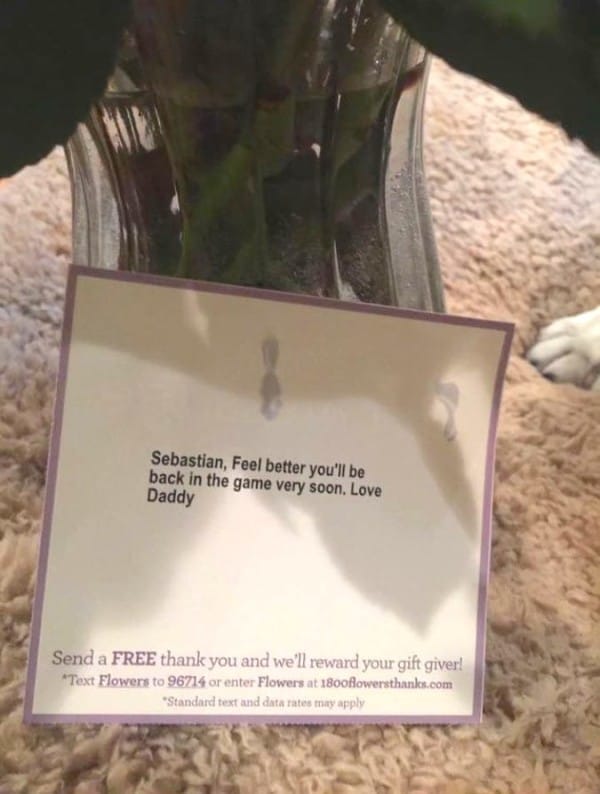 The pooch, who is a beloved member of the family, wasn’t feeling like himself. Sebastian had to have a double ACL surgery on his aging knees and was feeling much less energetic and exuberant than usual.

His dad was so worried that he sent him flowers and wrote: “Sebastian, Feel better you’ll be back in the game very soon. Love Daddy.”

Awww! Our hearts are melting, that’s for sure. 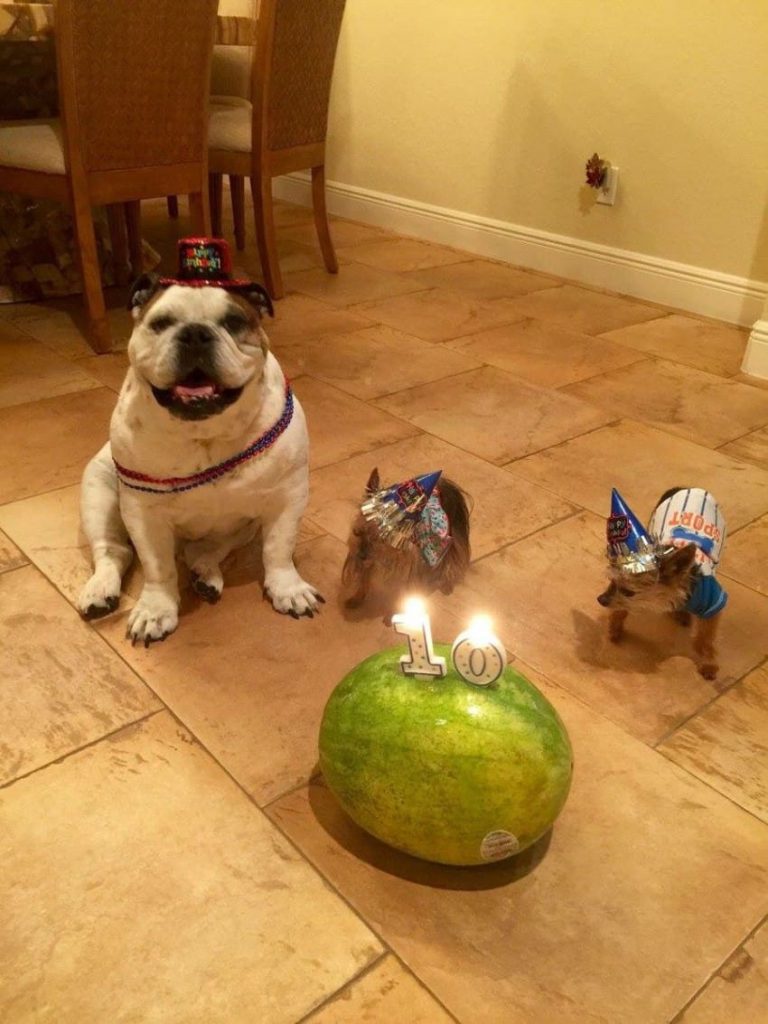 Sebastian just recently celebrated his tenth birthday, which is a major milestone for dogs! This adorable guy is officially a senior dog, and apparently, his knees knew it.

He had two of his knees repaired, and the whole family spoiled him with lots of extra love and attention during his recovery.

But Dad’s gift really takes the cake! And now, Sebastian is a viral superstar as a result! 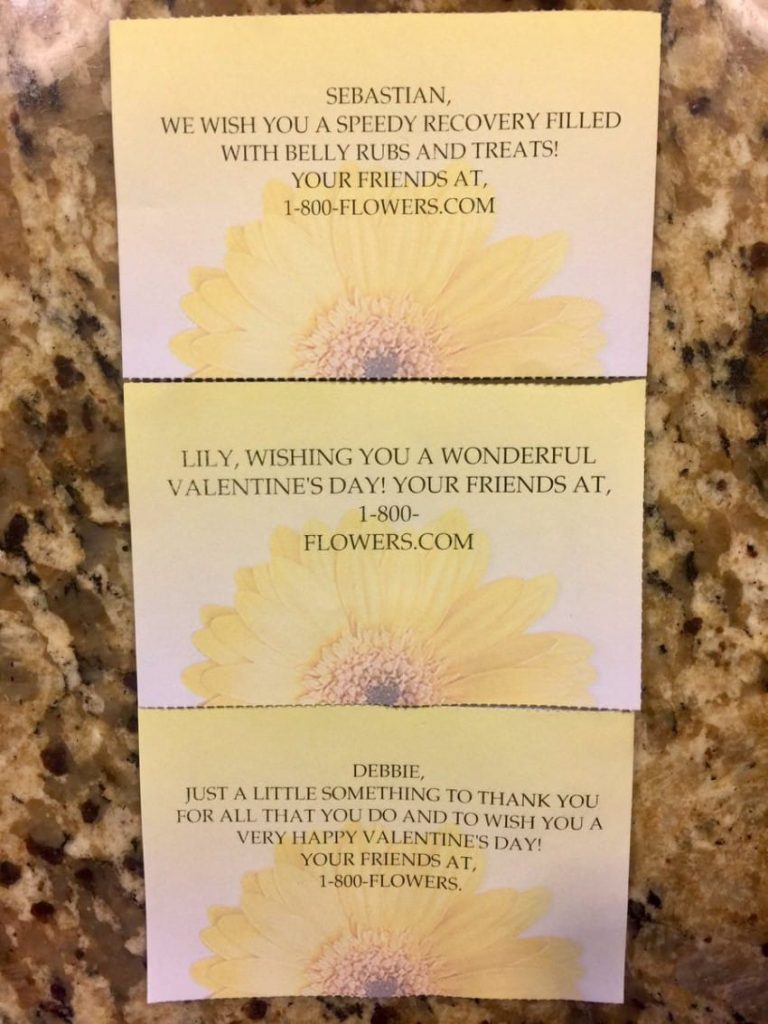 After Lily’s original tweets took off, she went back online to wryly note, “It only took 10 years and an ACL surgery for people to finally realize that Sebastian is a star.”

She wasn’t the only one impressed by her pup’s major star power. 1-800-Flowers, the company that delivered the gift, also made sure to send their love to the bulldog, and to the rest of the family.

They sent a series of notes, reading:

“Sebastian, we wish you a speedy recovery filled with belly rubs and treats!”

“Debbie, just a little something to thank you for all that you do and to wish you a very happy Valentine’s Day!”

Dad, if you are taking notes, I think you’ve been outplayed. 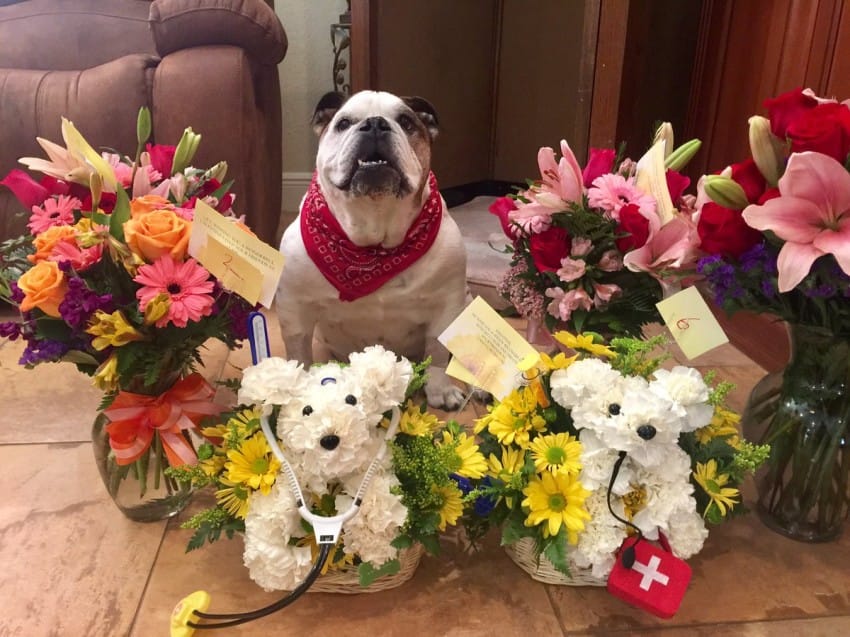 Of course, those notes didn’t arrive all on their own! 1-800-Flowers sent the whole family six stunning arrangements.

There’s Sebastian, sitting proudly in the middle. That is one very good boy!