Professor Schnitzel is a 13-year-old dog with tiny legs who likes hiking. Professor Schnitzel, prefers short walks, being carried around, gazing out the window from the warmth of a car and posing for photos with his tongue flopping out.

Professor Schnitzel has traveled a lot and has the Instagram pictures to prove it. 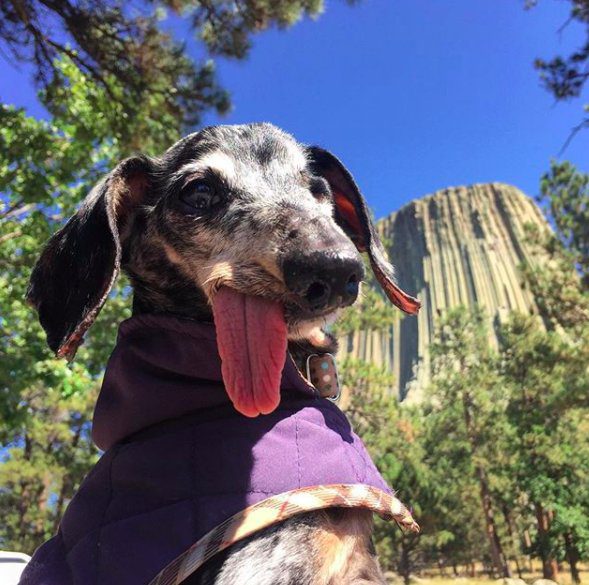 “He doesn’t fit the mold,” Stephanie Grutzmacher, Professor Schnitzel’s mom said. “He’s not some hiking golden retriever who goes out into the wilderness all the time, and he’s not a van life dog. He’s just along wherever I take him.” 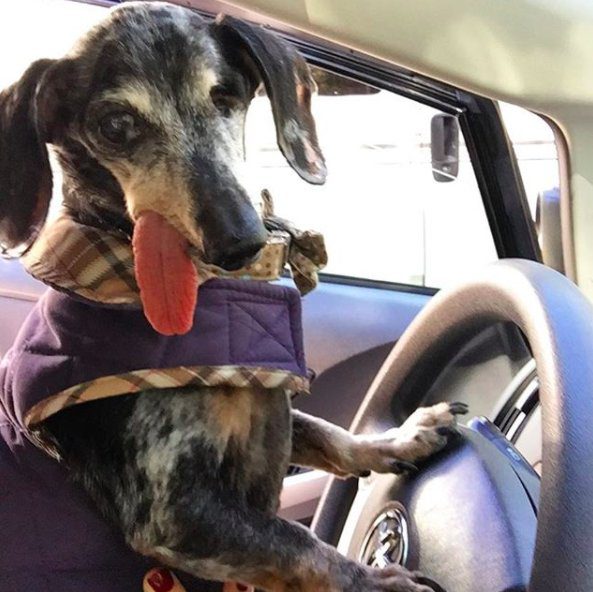 Professor Schnitzel was a sickly stray scampering around Washington state before he became Grutzmacher’s traveling companion. A police officer picked him up and brought him to a local shelter in Oregon.

Because of his age and a myriad of medical issues, he was scheduled for euthanasia after his mandatory three-day stray hold. 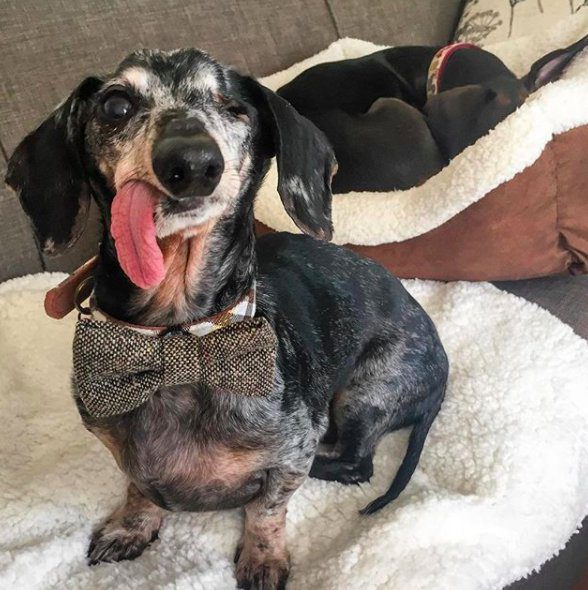 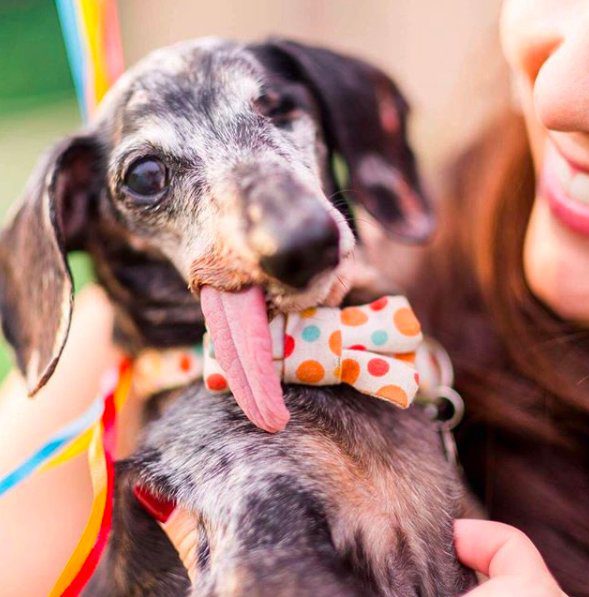 Grutzmacher had adopted another dog from the Pixie Project — a 6-year-old pinscher-greyhound mix named Beverly, six months ago. Grutzmacher also had a border collie mix named Molly. The last thing she’d intended on doing was to adopt another dog until she saw Professor Schnitzel’s profile.

“I thought, ‘I do not need another dog, but I need that little guy,’” Grutzmacher said. “He obviously has a unique appearance. He brought me instant joy, and he has not stopped bringing me joy with his hilarious little look.” 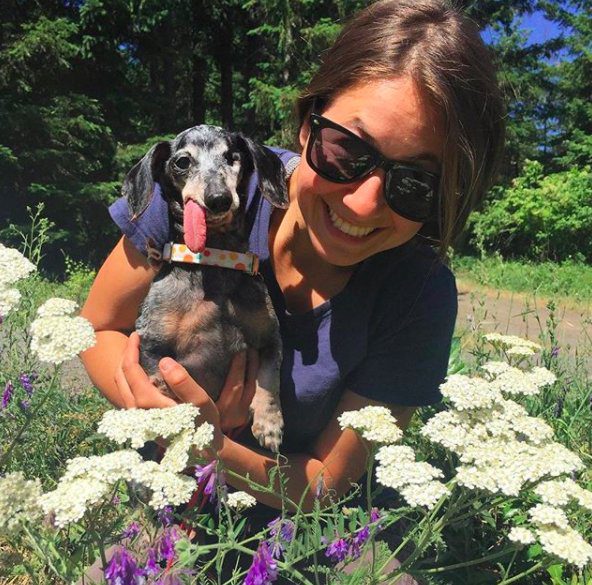 Professor Schnitzel’s most distinctive trait is his tongue, which spends more time outside of his mouth than in.

“He only has one tooth — it’s a lower canine on the opposite side to where his tongue hangs out, and so it kind of nudges itself on the side,” Grutzmacher said. “He doesn’t really have the structure in his mouth to keep all of his bits together, so he’s got a little floppiness there.”

He’s also got teensy little legs and a tiny body. “He’s like the size of a burrito,” Grutzmacher said.

Professor Schnitzel may look a bit goofy, but Grutzmacher sees his more cultivated, professorial side. That’s the reason she added “Professor” to his existing name Schnitzel. “I just thought he was so sophisticated and so wise that he should be a professor,” she said. “He also wears bowties.” 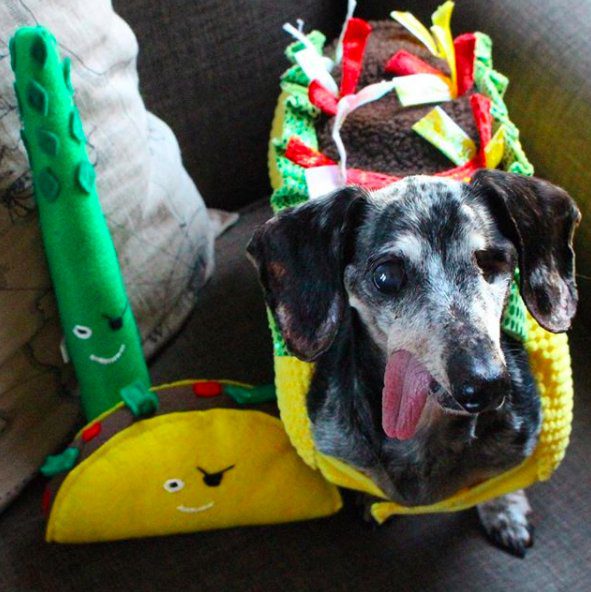 Being a member of Grutzmacher’s family has come with plenty of perks — one is that Professor Schnitzel gets to travel a lot. 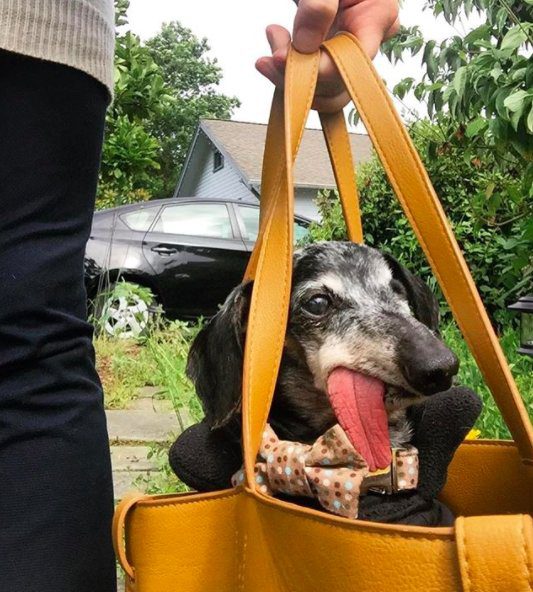 “My partner and I are bicoastal right now in a temporary way,” Grutzmacher said. “We lived together in Maryland for 15 years, and then I came out here for a job and he’s still in Baltimore. So I travel back and forth quite often … and I’ve taken [the dogs] on my road trips with me. So we pile in the car and travel across the country.” 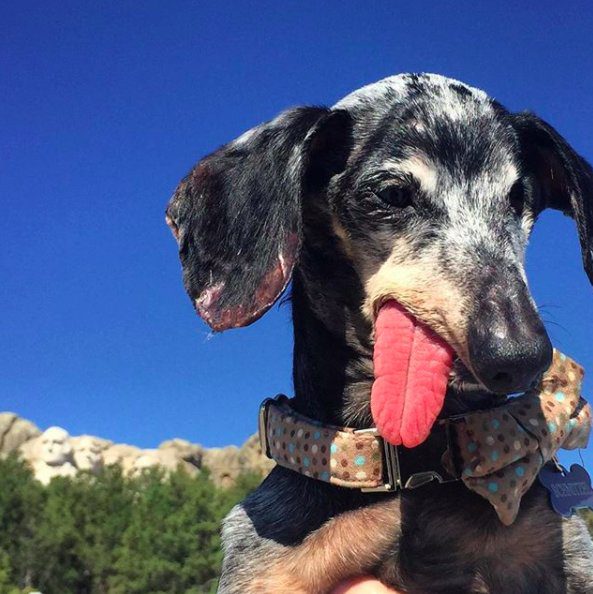 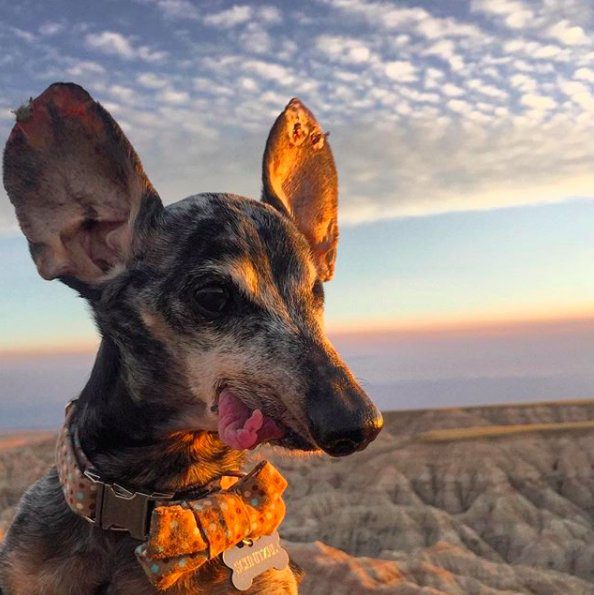 “It was so windy there, and his ears and his tongue were blowing all over the place and whacking him in the face, and it was too hysterical,” Grutzmacher said. “That was the windiest place he’d ever been, and it kind of made all of his floppy appendages shine even more than they normally do.” Professor Schnitzel has traveled to 18 states, and he’ll visit Florida over the Christmas holiday. “He’s going to love it because it’s going to be the warmest he’s ever been in his entire life, which is probably his happy place,” Grutzmacher said. Professor Schnitzel has also flown on a plane. “He was watching out the window of the airplane, and he looked genuinely curious about what was going on out there,” Grutzmacher said. When Professor Schnitzel isn’t traveling, he enjoys hanging out with his new dog siblings, Beverly and Molly, as well as the many foster dogs whom Grutzmacher cares for.

“The other dogs cuddle with him all the time and they totally adore him,” Grutzmacher said. “But they’re not always super respectful of his tiny thighs. Beverly is a stage-five clinger, and she’s always trying to cuddle super close with everybody, and sometimes I’ll find [Professor Schnitzel] stuffed between pillows because she’s cuddling him so hard.” “So they all get along great, and they keep each other warm, but he definitely is smaller than they realize — and he ends up in strange situations because of that,” she added.

Professor Schnitzel is in good health at the moment, however, Grutzmacher recognizes that he is older. But she is determined to make his last years — or months — as enjoyable as possible. “I feel that every single thing that he gets to do and every friend that he has … is making up for a life of neglect and being uncomfortable,” Grutzmacher said. “No matter how long he’s with us, it’s our job to make every day comfy and fun and interesting.”