At the Taiji Whale Museum in Taiji, Japan, a video of a Risso’s dolphin is standing upright in an ocean pool as a man siphons water into her stomach with a long plastic tube. The dolphin remains still for as long as the tube remains in her throat, only dipping below the surface once the tube’s removed. 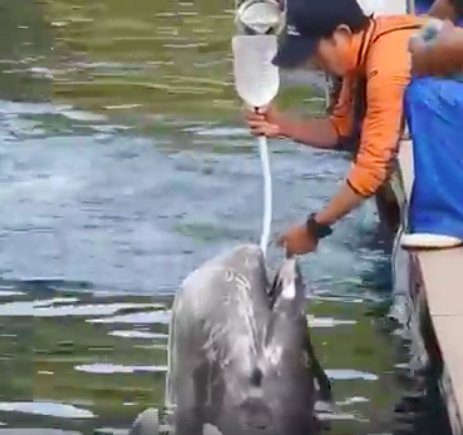 Dolphins in the wild don’t need to be given water through a tube, they get all the hydration they need from the fish they eat. But dolphins that live in captivity don’t have the freedom to find her own fish. Instead, she has to rely on handouts of frozen fish that are defrosted, and frozen fish lose most of its water, which is why the Dolphins need this extra hydration.

Heather Rally, a marine mammal veterinarian who currently works with the PETA Foundation, explained that the dolphins definitely do not like the tubing process, but it doesn’t necessarily hurt the dolphin,

“It is likely uncomfortable to the dolphin and can cause irritation to the esophagus or introduce unwanted pathogens if not performed correctly,” Rally said. “Tubing is another in a long line of unnatural procedures imposed upon animals like dolphins and whales who are kept in captivity — a health risk in and of itself — out of necessity to help keep them alive in a foreign environment unsuitable to their long-term well-being.” 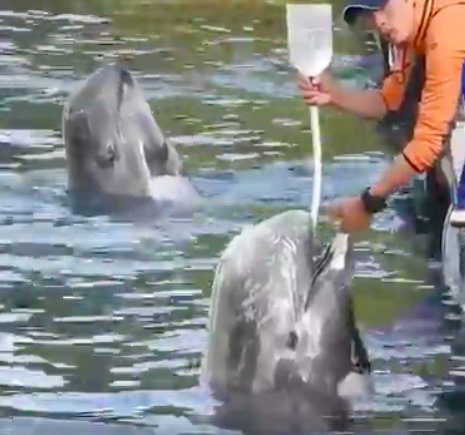 If the dolphin didn’t get this extra hydration, she could face other health issues.

“If dolphins don’t consume enough water to maintain a healthy hydration status, they would become dehydrated — and ultimately, if dehydration progresses and isn’t corrected, this can lead to hypovolemic shock, multi-organ failure, and death,” Rally said.

It’s not just dehydration that’s dangerous to the dolphin, it’s captivity itself. “While dehydration can be treated through artificial means like intubation or supplementing an animal’s diet with ice cubes or gelatin, captivity is hard on marine mammals and has a documented negative impact on their longevity and quality of life,” Rally said. 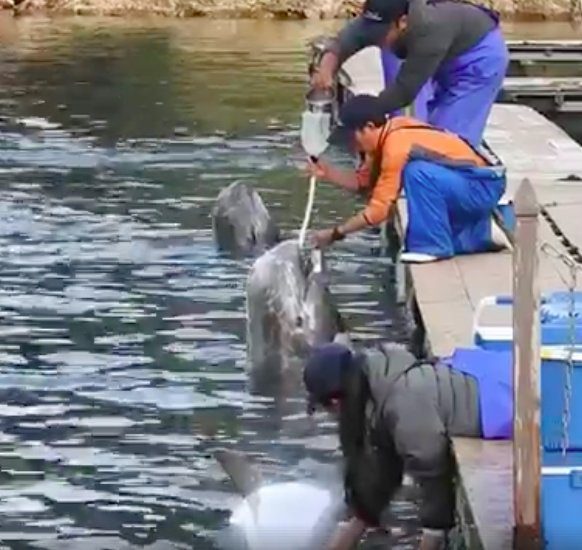 “Everything about life for marine animals in captivity is artificial, including being confined to tiny concrete tanks, being separated from their families, being forced to live either in lonely isolation or with animals they may fight with, being given antianxiety drugs — as is an admitted practice at facilities like SeaWorld — to relieve the stress of captivity, and endlessly swimming in small circles,” she added. “The necessity of having to hydrate an animal forcibly through the tubing and other methods is just one more example of how unnatural and damaging life in captivity is for these animals.”

This dolphin was almost certainly captured off the coast of Taiji, Japan during one of the dolphin drive hunts that take place each year. 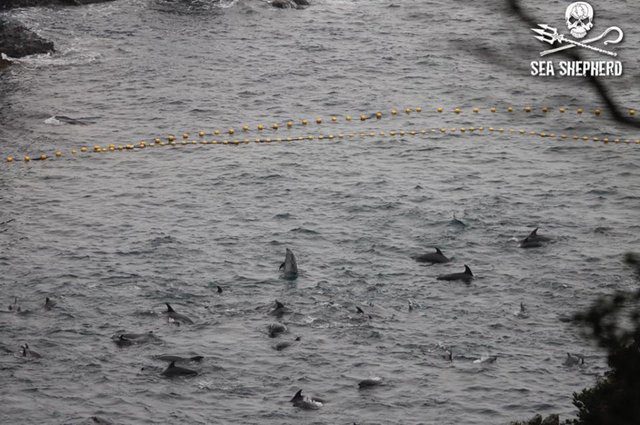 Once a year, fishermen in Taiji drive boats out into the open ocean to locate pods of wild dolphins. The fishermen bang metal poles against their hulls to create “walls of sound” to prevent the dolphins from swimming away. Once the fishermen round up the dolphins, they drive them into a nearby cove and slaughter them for their meat, often right in front of their family members. 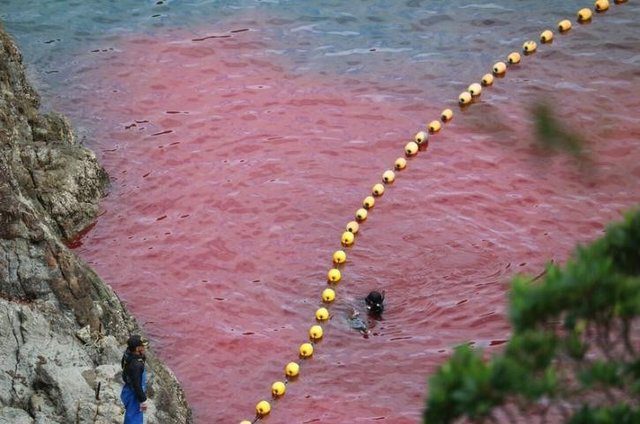 Before the killing happens, people choose the most attractive dolphins to sell to dolphinariums and swim-with-the-dolphins programs around the world.

“Some live captures may be transported to other facilities, but this one was placed at the Taiji Whale Museum,” Christine Gau, program coordinator for Ric O’Barry’s Dolphin Project said.

It is too late to help this Risso’s dolphin, animal welfare advocates hope to stop the dolphin slaughter in Taiji for good.

The best way to fight this issue is to not buy a ticket to dolphin shows, according to Gau. “Captive cetaceans like this Risso’s dolphin can only be saved if international demand for captive entertainment ends,” she said.