Often time, dogs that have gone through a long period of abuse take a long time to adjust to their new lives, even if it is in a loving home. Recovering from their physical problems can be enough of a challenge. That is to say nothing of the emotional problems they have sustained.

Mowgli, the dog, was found attached to a chain in the woods as if he was a wild, vicious animal. After he was finally freed, no one expected him to behave the way he did.

In March of 2017, an elderly couple found Mowgli tied up to a tree with a chain in the woods. He was severely emaciated, his paws were so swollen that he could not even walk and his skin was horribly infected. The couple quickly untied him and brought him home. 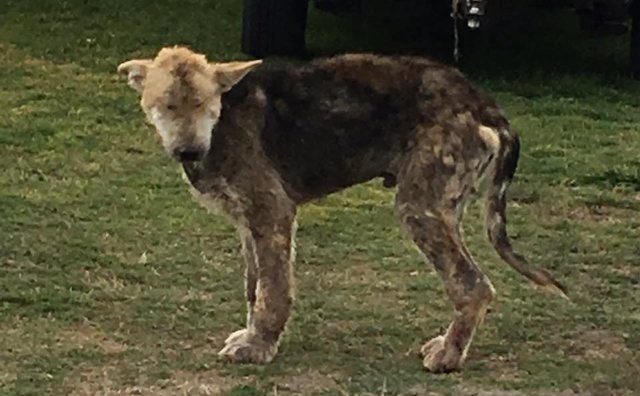 The couple did their best to help but were ill-equipped. They kept him on a dirty porch and treated him only with Benadryl.

Luckily for Mowgli, a concerned passerby decided to contact Mysti Boehler, the founder of StreetsToSheets Animal Rescue, a non-profit organization based out of Texas. She immediately agreed to step in and help Mowgli. 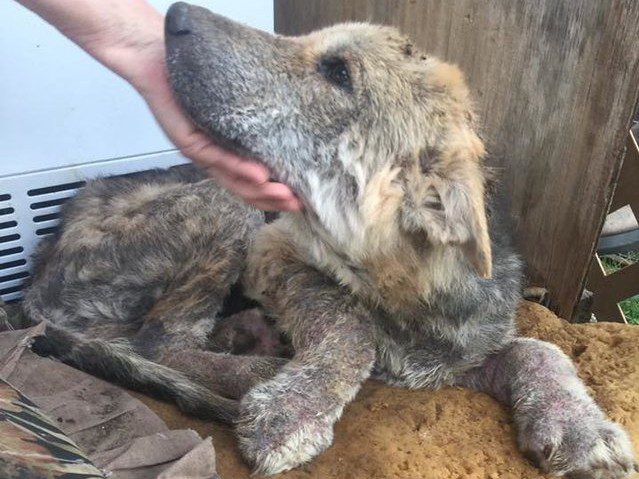 Mysti took the dog into her own home and named him Mowgli after the main character from the beloved children’s classic, The Jungle Book. 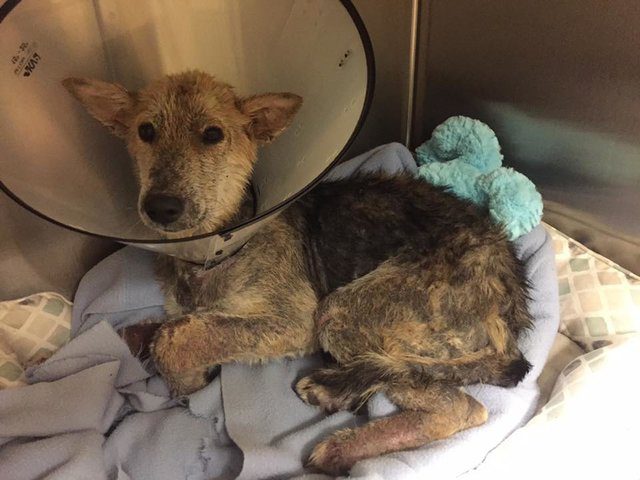 Poor Mowgli only had one spot on his face that Mysti could touch without him yelping in pain. She brought him in for a veterinary examination, where it was discovered he had countless injuries and ailments. Mysti was determined not to give up on him. “He was just a pup, and it was obvious by his condition no one ever cared about him.”

Mysti spent the next few weeks caring for Mowgli, giving him antibiotics, pain medication, and medicated baths. Even though he had a bed of his own, he enjoyed snuggling up with Mysti and other members of her family!

“As soon as we got him home and laid with him and showed him our touch was out of love and we were not going to hurt him, he actually opened up to us very quickly,” said Mysti. “And all he wanted was attention.” 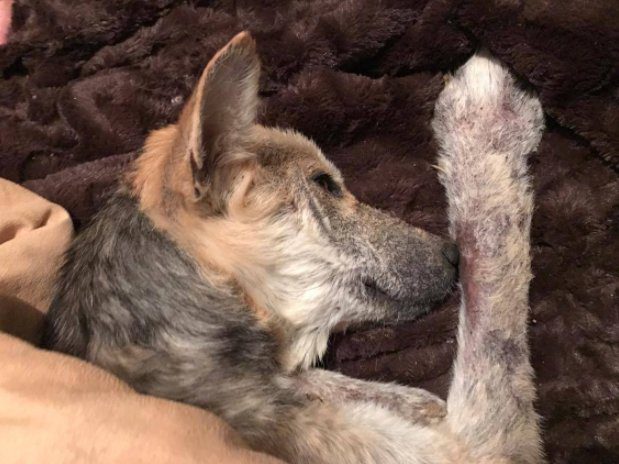 Mysti shared pictures and videos of Mowgli on the StreetsToSheets Facebook page, and strangers began sending Mowgli gifts like toys, blankets, dog treats, and even a new bed!

One gift was super special: an Easter basket that came complete with a stuffed bunny and gourmet dog treats, sent by Christa Chilcote, a Pennsylvania resident. “There was just something about him,” Christa. 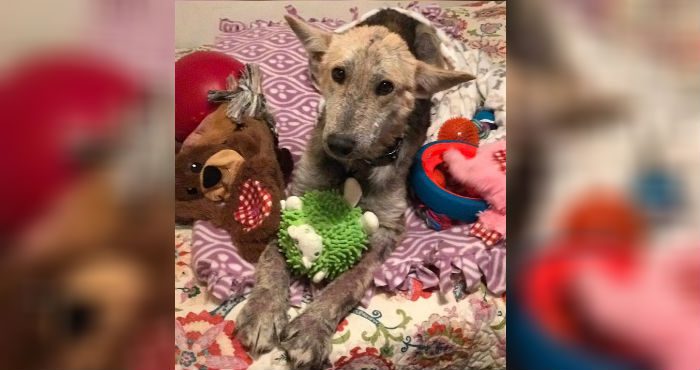 Christa lived about 1,200 miles from Mysti and she thought she would merely be admiring Mowgli from a distance. She already had a full house with her husband, toddler, stepdaughter, and three dogs. Eventually, though, her love for Mowgli became too much to handle. “I said to my husband, ‘I can’t let him go anyplace else but here,’” said Christa. Mysti and Christa had spoken to each other on several occasions, so when it came time to consider Christa as a possible adoptive parent for Mowgli, Mysti’s decision was easy! 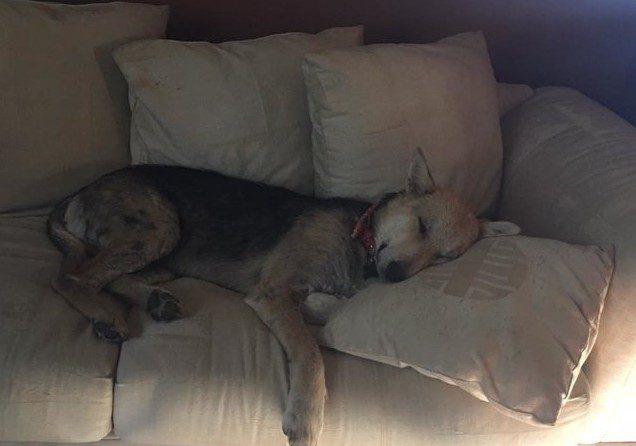 “I could tell in her voice and by the words she spoke that she loved Mowgli like I could only dream a person could love him,” said Mysti. Just one month after Mowgli was fostered by Mysti, he was ready to go to his new forever home. 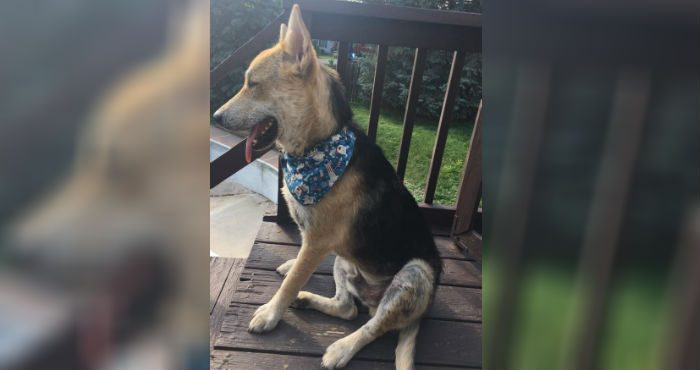 Christa is still absolutely in love with Mowgli! He loves to cuddle and have his belly rubbed. “He doesn’t act like he’s in any discomfort at all when anyone touches him,” said Christa. Mowgli loves his human sister, Jovie, and his dog brother, Ramsey. It is wonderful to see how he was able to connect with his new family even after everything that he’s been through! 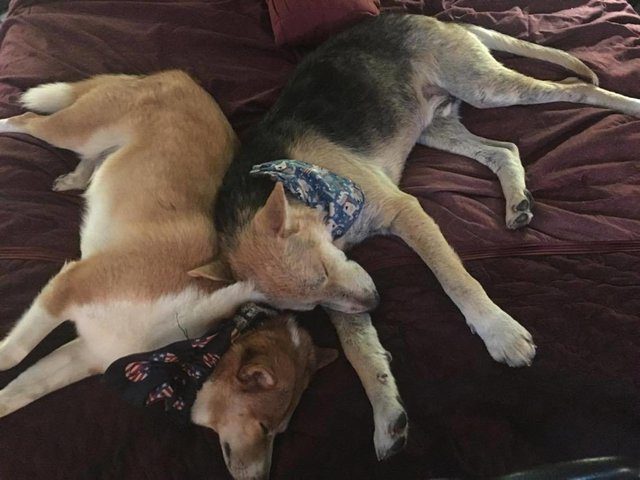 “When [Jovie] wakes up in the morning, she says ‘Momma, where’s Mowgli?’” said Christa. “He’s super, super gentle with her.” Clearly, training to behave properly around children wasn’t a problem for a sweetheart like Mowgli! 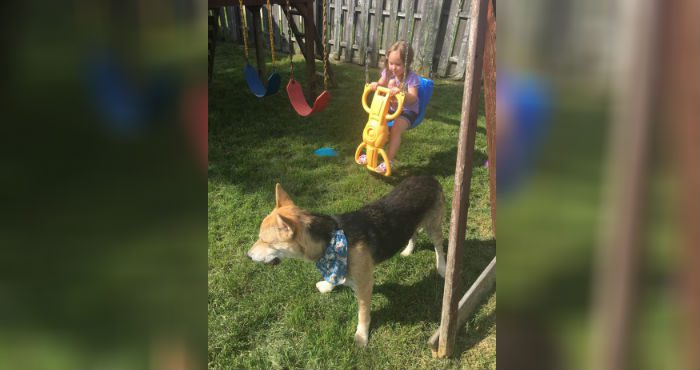 The pooch is so very happy with his new canine siblings! They all are so cute with their matching bandanas. Mowgli’s transformation is incredible! 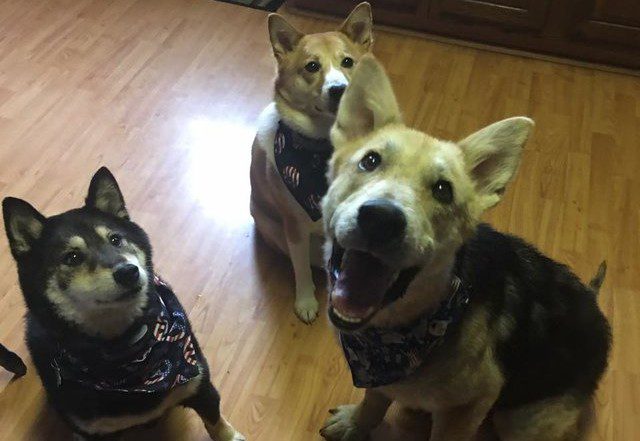 Thanks to his adoptive family, Mowgli has a special diet of only the healthiest foods, and his fur is regularly rubbed with organic coconut oil. He’s finally growing back his thick, luscious coat! “Paw prints left on my heart are so much more meaningful than diamonds on my finger,” said Christa. “We’re lucky.” A Mowgli Day celebration was even held at the shop where Christa bought him his first Easter basket. “Tons of people came to that party just to meet him,” Christa said. “He’s doing great.” Just as Mysti promised Mowgli on the day that she first met him, his life turned out to be so much better. “I wanted him to know what love was,” said Mysti. “That sounds so cliché, but it’s true.” Now, Mowgli knows what it means to be treated right!