It was still dark out at 4:30 a.m. when Patrick Hennessey drove to work in Orange County, FL.

He thought it was going to be a morning like any other until he saw mysterious shapes cowering in the middle of the road. Slowing down, he was shocked to discover the shapes were two pit bulls. One was injured and bleeding, and they each refused to leave the other’s side.

Hennessey immediately called the police. Soon, Deputy Reed and Deputy Boggs from the Orange County Sheriff’s Office arrived on the scene. The dogs were nervous but seemed calm when the officers approached them gently.

Pit bulls are in a precarious situation thanks to misconceptions about the breed. Because people think they’re inherently violent, they’re often passed over in shelters, abandoned, and euthanized. In particularly gruesome circumstances, they’re even exploited as fighting dogs.

But anyone who’s been around one knows how sweet they are, and how they’re willing to make friends with just about anyone, even a cranky chicken.

On the street, the officers gently led the dogs off the road to a safe area.

By that point, the dogs were convinced the officers were there to help. They snuggled up to them, looking for a little comfort after what must have been a harrowing night. 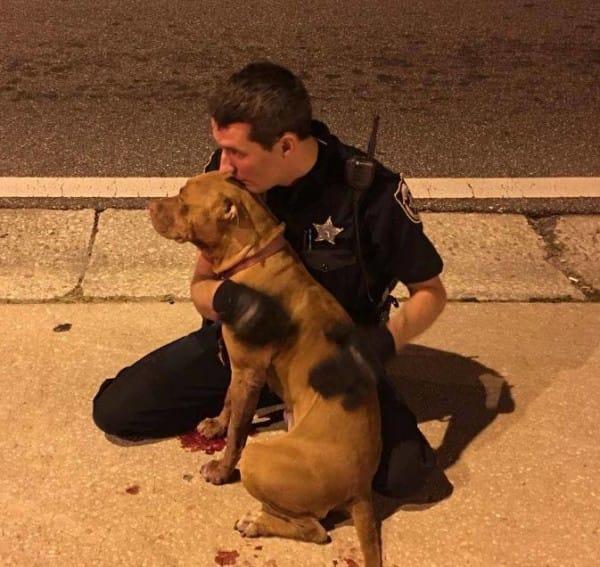 Deputies Reed and Boggs arrived on the scene at 4:30 a.m. in Orange County, FL, surprised to find two frightened, seemingly abandoned pit bulls cowering in the middle of the street.

They’d been spotted by a man driving to work, who immediately called for help. One of them was injured, bleeding from her leg. 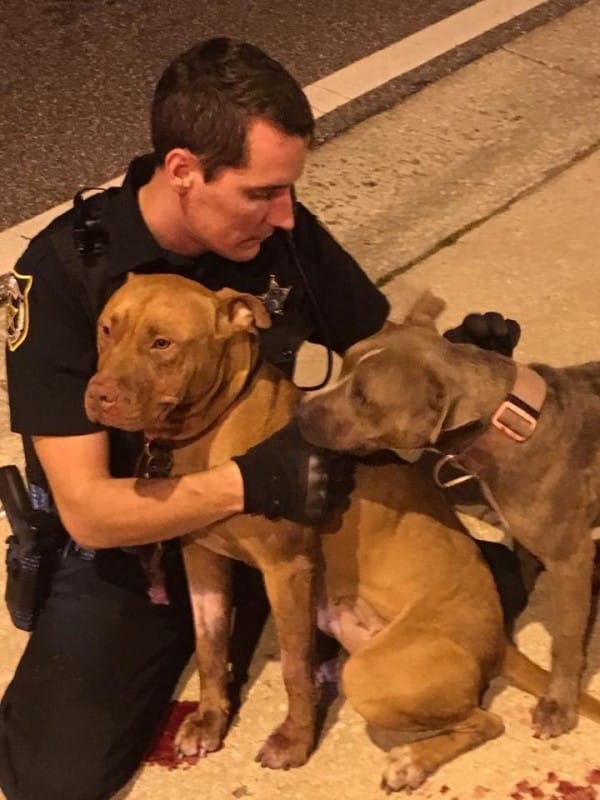 After moving the pit bulls out of the road, it became clear that they were in serious need of some comfort. The officers were more than happy to oblige.

The dogs leaned against them and cuddled them. No one’s sure what they went through, but it seems it was a lot. 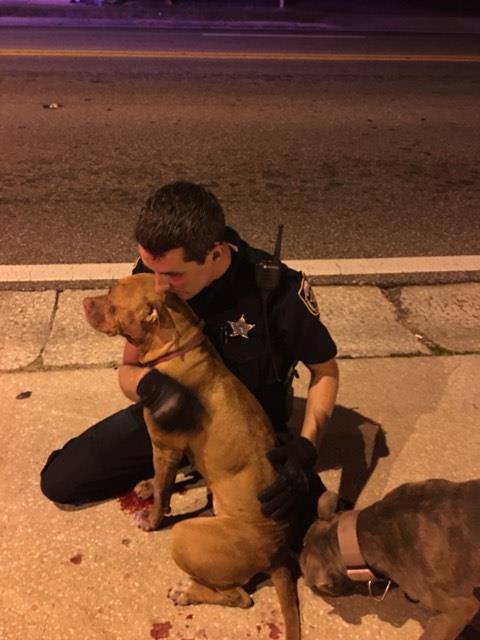 The officers applied gauze bandages to the one dog’s injured leg, stopping the bleeding.

The dogs both had collars, so it’s possible they were intentionally abandoned. 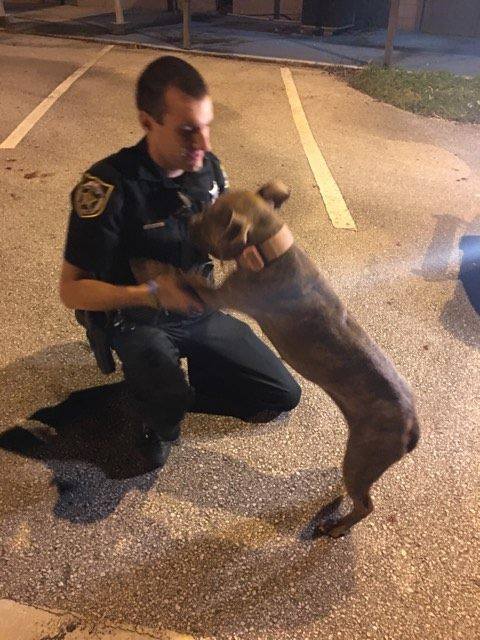 Deputies Reed and Boggs stayed with the dogs until Orange County Animal Services arrived. They took the dogs to the local shelter, where they were checked out, cleaned up, and given time to rest. 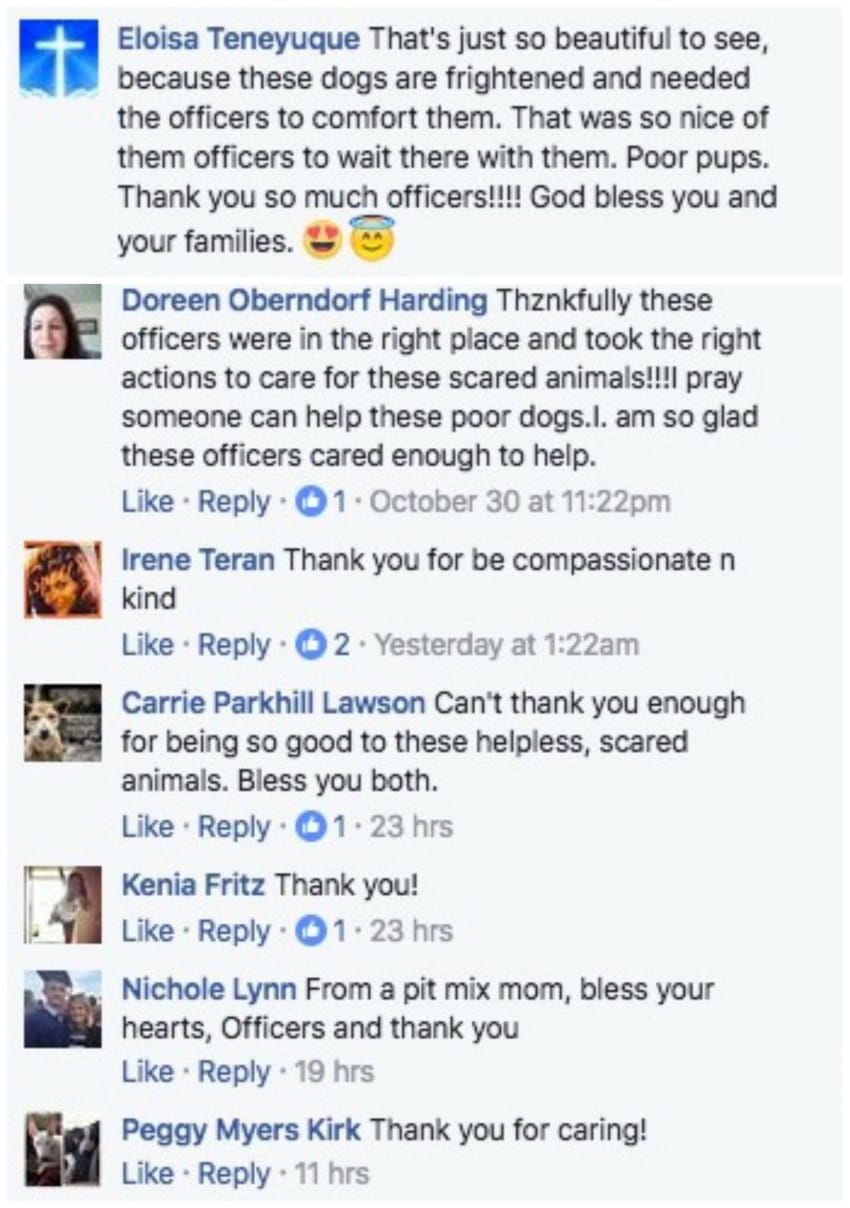 After posting the photos above, the community was delighted at the quick action and compassion of the officers.

Especially touched were people with pit bulls of their own, who know how often dogs of this breed end up in bad situations. 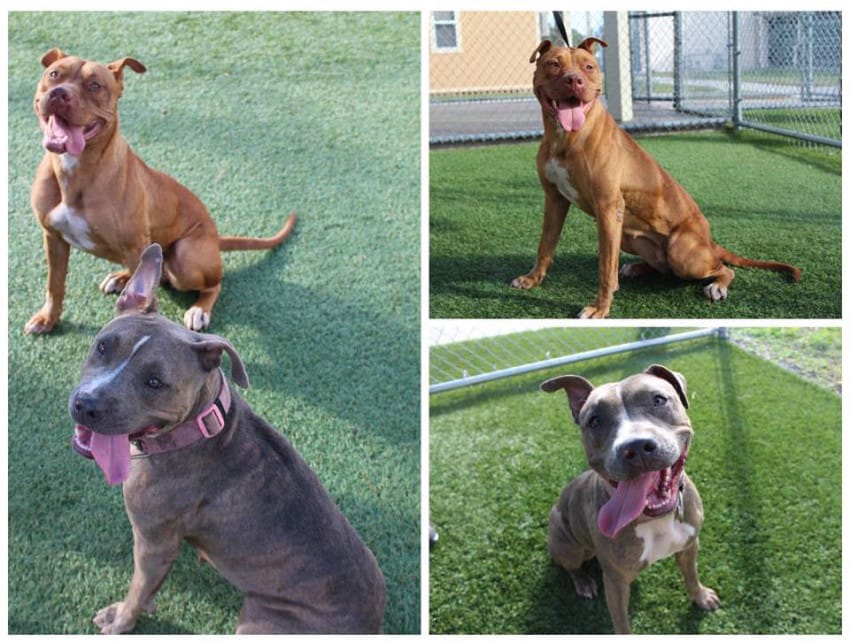 Today, the rescued dogs are doing well and looking for forever homes.

The dogs, both girls, were given the names Justice and Liberty. The shelter staff says they’re sweet, lovable, and friendly.

You can see more of what Orange County Animal Services does on their website and Facebook, and consider donating to make sure pups like Liberty and Justice get the care they need.