Charlie and Moomin had not spent much time with other hippos before they met. Charlie spent most of his life with people and rhinos, while Moomin’s best friend was a sheep. However, when the two hippos met, they fell madly and deeply in love. 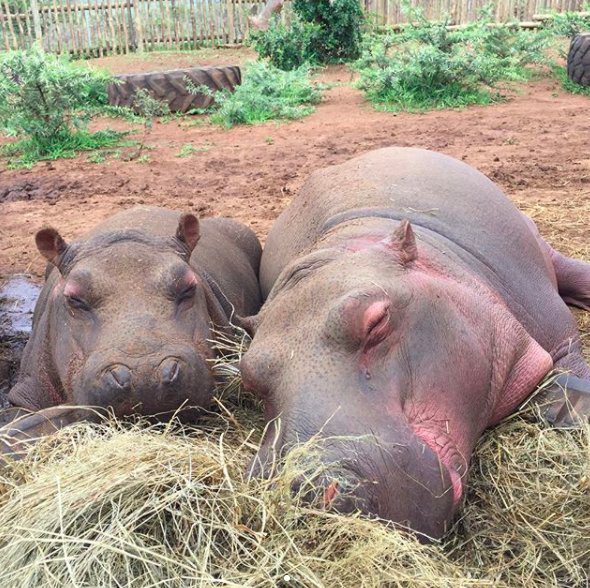 Charlie and Moomin had very rough starts to their lives.

When Charlie was only 2 days old, his family abandoned him in South Africa. He was left sick, alone and vulnerable to predators. Luckily, rescuers found Charlie before anything happened to him and delivered him to Thula Thula Rhino Orphanage. 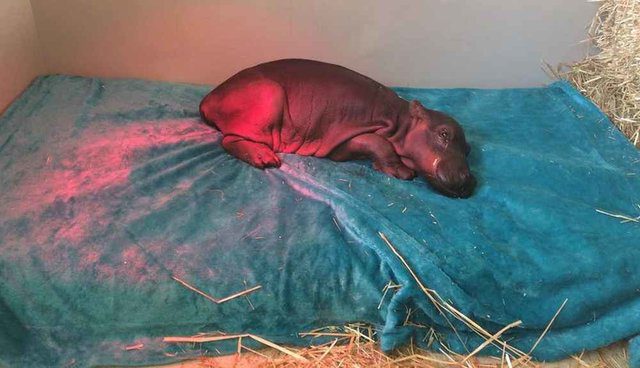 Charlie bonded with Makhosi, a young female rhino who’d also lost her family while living at the rhino orphanage. The two helped each other grow healthy and strong.

Moomin, she was only 3 months old when rangers found her huddled next to the body of her dead mother in the Kwandwe Private Game Reserve in South Africa. The team at Kwandwe brought Moomin into their care and found her a friend, Piet the sheep. 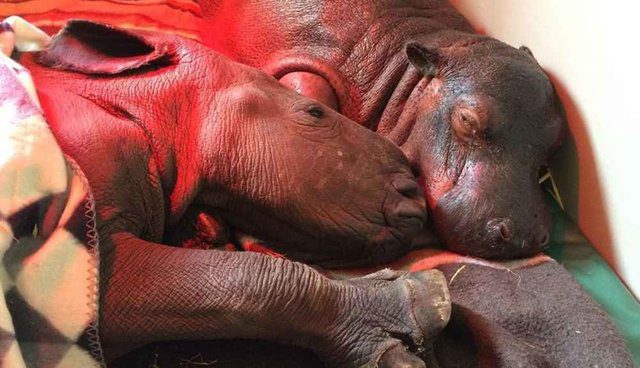 The team at Zululand Rhino Orphanage got a call from the rangers at Kwandwe Private Game Reserve in September 2017. The Rangers heard about Charlie living there, and they wanted to know if they could move Moomin to the orphanage and set the two hippos up. “I knew Charlie needed a female of his own species to ever stand a chance of being released back into the wild, [but] I honestly had no idea if Charlie and Moo would like each other,” Megan Lategan, manager at Zululand Rhino Orphanage said. “It was a huge risk, but one we had to take.”

Lategan and her boyfriend drove for over 40 hours to pick up Moomin and Piet and bring them back to Zululand Rhino Orphanage. Moomin lived over 800 miles away, but the journey was worth it. “We built a small fenced pen for Moomin and Piet inside Charlie’s boma [enclosure] so that they could get used to each other slowly,” Lategan said. “Moomin and Charlie immediately started sniffing each other through the fence and they snorted at each other, calling loudly in their hippo voices every now and then. We were so excited at their initial reaction. After two days of them ‘chatting’ through the fence we decided to let Moomin and Piet in with Charlie.”

When the moment finally came for the hippos to meet face-to-face, Charlie seemed more interested in Piet. 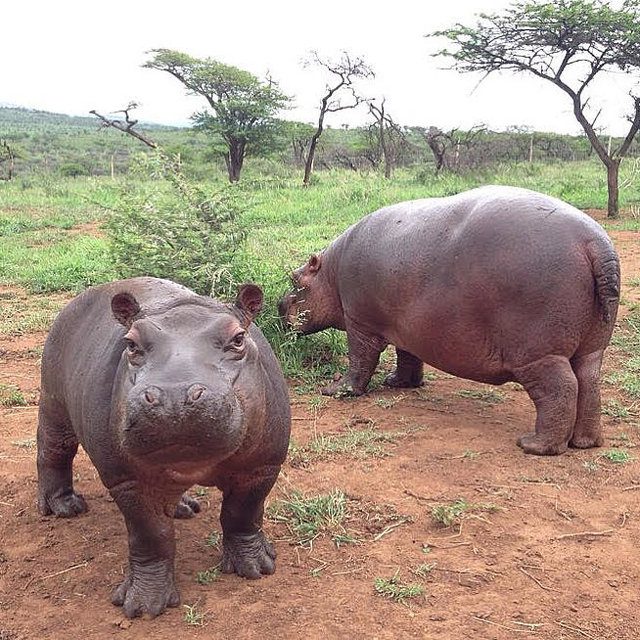 “He sniffed him [Piet] and chased him around the boma with Moomin in tow,” Lategan said. “Moomin would sneak up to Charlie and sniff him from behind in her shy manner. It was clear that in order for Charlie and Moomin to bond we needed to remove Piet the sheep from the equation.”

Trying to separate Moomin and Piet was going to be tricky, the pair had not spent a moment apart for months. “The next day we kept Moomin busy and coaxed Piet out with some grass, and we moved him to a boma nearby,” Lategan said. “When Moomin realized he was gone, she did a 360-degree turn around the boma searching for her friend. Piet was gone but Charlie was there. Within minutes she latched onto Charlie and they started getting to know each other.”

That’s when the friendship between Charlie and Moomin started to bloom. “It has been incredible watching how quickly their bond has formed,” Lategan said. “They spend almost 60 percent of their days in the water, where they chat away, and nap in between.”

As for Piet the sheep, he now lives on a nearby property surrounded by ewes. “He’s happy as any ram could be,” Lategan said.

Charlie still has contact with Makhosi, who lives in the enclosure next to his, but since Moomin has arrived, Charlie spends all of his time with his new hippo friend.

“They are inseparable and Charlie is extremely protective over Moo,” Lategan said. “If she is unsure, she hides behind him with her head tucked under his bottom.” 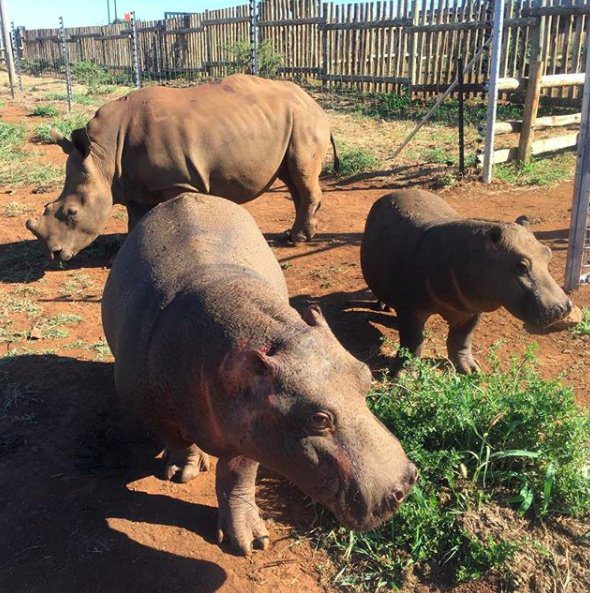 “I absolutely love the way Moo rests her head on Charlie’s back — it’s a real comfort, ‘I am safe’ position,” Lategan added.

According to Lategan, Moomin taught Charlie a lot about being a hippo. “Charlie has never been with another hippo his whole life, and Moo has taught him what it is like to be a hippo and not a rhino,” she said. 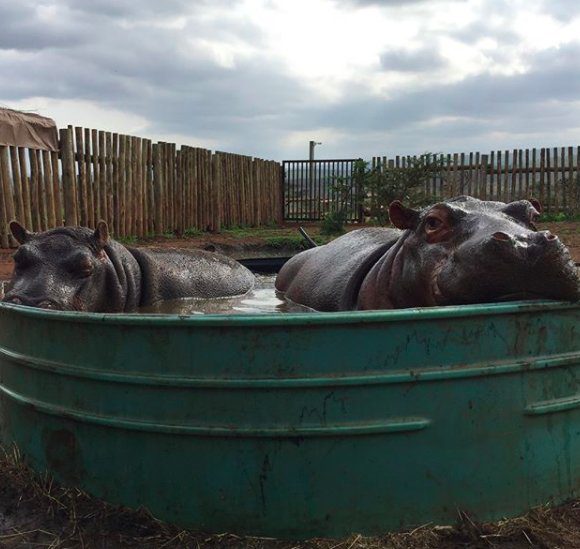 “Before Moo arrived, we would have a hard time getting Charlie to spend time in his water hole,” Lategan said. “Now Charlie and Moo spend about 70 percent of their day in the water.”

Moo also taught Charlie how to properly drink. “Charlie would always ‘bite’ the water, then throw his head back to swallow,” Lategan said. “He now puts his lips in the water and slurps as hippos normally do.”

The two not only spend their time together they also constantly talk to one another. 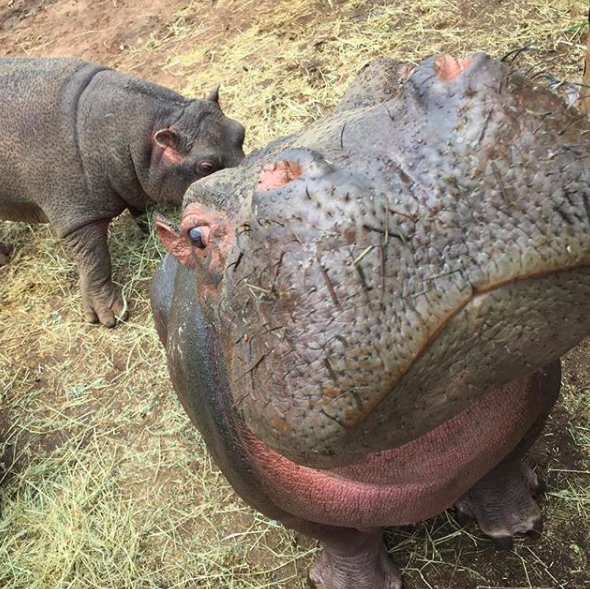 “They chat all day,” Lategan added. “Charlie calls with a loud, deep voice and Moo calls after him with a gentle, softer voice. It’s too precious.”

They’ll be released back into the wild when they are old enough. 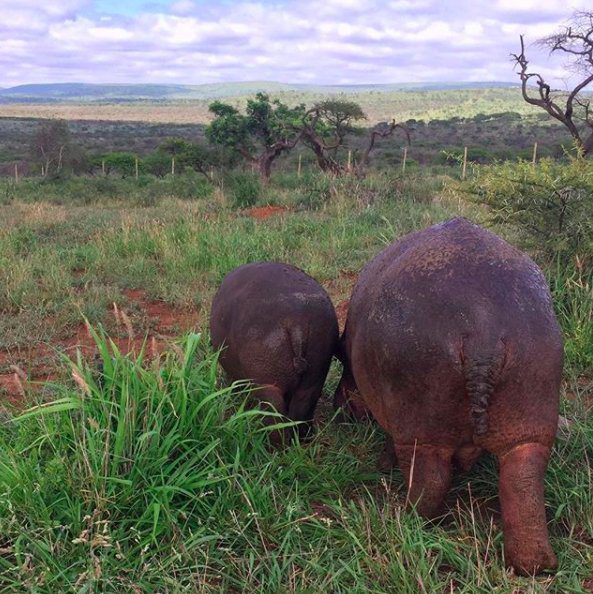 “When Moo is off milk, then they will stay in a 3.5-hectare boma with a big dam where they can swim all day and graze all night,” Lategan said. “This will also slowly get them less attached to their carers.”