Home
dogs
Why Do Dogs Lick Your Feet?

Dogs are made quite differently than humans are. The way they communicate, show affection, and act daily is specific to their breed, and it helps them be the best type of animals they can be.

Licking is something dogs love to do, whether it is through licking other animals, people, or themselves. You may notice your dog loves to lick your feet, and although it feels weird, there is actually a purpose to it. But why do dogs lick your feet? 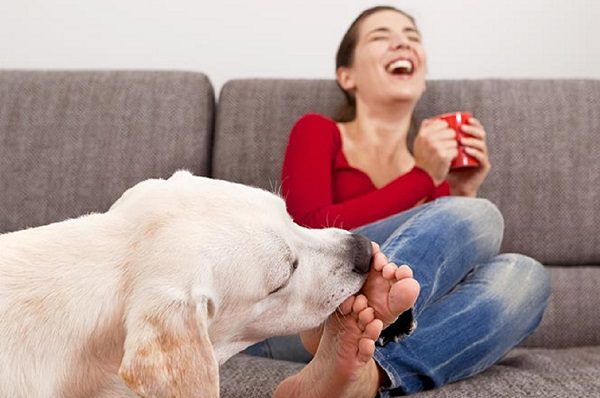 Exploring the answer to that question can help change your perception of your dog’s desire.

From the very minute a dog is born, the act of licking plays a key role in information gathering, communication, and feeding. Moms lick their puppies to clean them, help them start breathing, and stimulate their digestion. In turn, puppies will lick their mom’s face to show submission. According to Dr. Elizabeth Stelow, chief of animal behavior services at the University of California.

“Each dog probably has his own reason,” Stelow tells us.

Behaviorally, there are a number of reasons that could prompt why do dogs lick your feet. “It may be because the attention from an owner is reinforced when he sees his pet doing what they please with their actions,” says Stelow. Another theory suggests it has more to do with social interaction than anything else – dogs usually don’t engage in this kind of behavior between humans but rather focus on other animals or themselves!

"I don’t always lick Mum’s feet, but when I do, I maintain an uncomfortable level of eye #contact with Da" #corgi #dog #dogs #pics pic.twitter.com/TgBg64SdWQ

If your dog is licking you to get attention, he might have associated the act of licking with positive reinforcement. It’s likely that last time it produced some sort of reaction and now whenever we scratch behind his ears or give him an approving pat on the head after doing something good he thinks it’s worth getting scratches for!

Licking feet can be seen as social maintenance behavior, Stelow notes. Like when you get your face mask on or braid hair for someone else- they’re showing their love by caring about that skin and hair of yours!

It may be a “displacement behavior”

In some scenarios, feet licking may not even be about the owner at all. When a dog licks his owner’s feet after being left on its own to grieve or explore in order to soothe himself when tensions run high Stelow explains.

The behavior may not even be feet-specific at all. “It may be that he is ‘a licker’ and licks other things in the household, too,” Stelow says.

The feet are the most important part of any shoe, and the sweatier the better. “From a medical perspective, a high percentage of dogs that lick things have primary gastrointestinal issues,” Stelow adds. “Some suggest that some dogs may be trying to replace a missing mineral nutrient.” 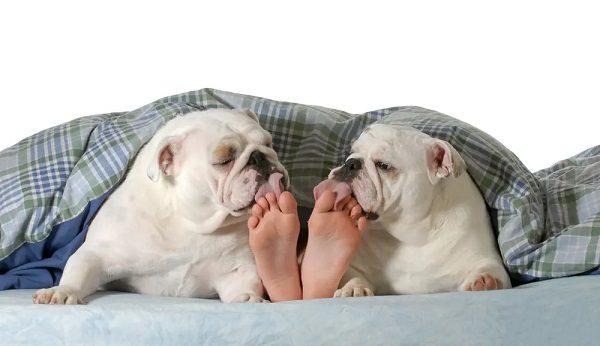 Stelow encourages owners to refrain from any type of punishment to deter the behavior. “First, it won’t support the owner’s bond with the dog. Second, it will backfire if the dog is trying to relieve stress or get the owner’s attention by licking,” Stelow explains.

If you find your dog constantly licking your feet and they don’t seem to mind, it might be time for a vet visit. A specialist can detect any underlying medical problems that lead the slobbering feet kisses! Happily, feet licking usually isn’t something to worry about, Stelow says. 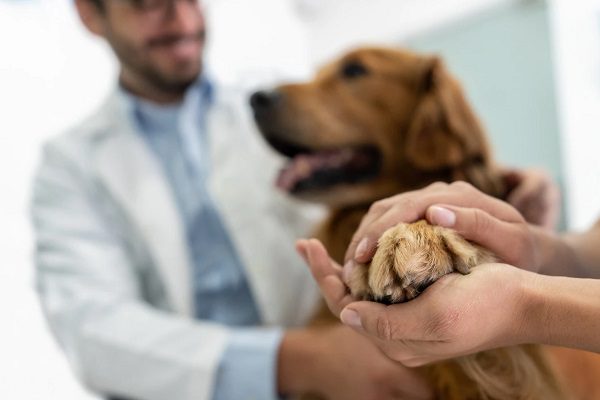 Whether we are dogs or humans, we tend to want to feel calm, collected and loved. As canines, licking is a way to achieve those goals as well as communicate with the outside world. Supporting them, loving them, and allowing their needs to prosper can help you and your owner stays more connected. Now that you know the answer to the question, Why do dogs lick your feet and learn the reasoning behind your dog’s other strange behaviors?