The intense connection between a mother and her newborn baby transcends both circumstance and species.

Mothers will risk their lives for their children, fight for them, and support them through any difficult incident or ailment.

Though there are many notable examples of human mothers’ unwavering love for their children, like this incredible mother going through chemo, dogs can also showcase some fierce maternal instinct.

In Sacramento, CA, one pit bull mom exemplified how important her new babies (all 10 of them) were to her.

After being abandoned at the Sacramento SPCA, mere hours after giving birth to her large litter, the mama dog stayed faithfully huddled near them until help arrived.

Thanks to her devotion to the adorable babies, the entire family is now safe and sound in a new happy home.

Her perseverance despite the odds is a model example of motherhood, and how hope and adoration for a family are stronger than any tough situation. 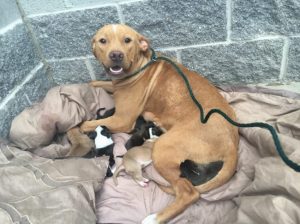 The Sacramento SPCA staff arrived in the morning to quite a surprising site.

Dumped on their doorstep were a new pit bull mother and her 10 tiny babies, with no assumed owner in sight. 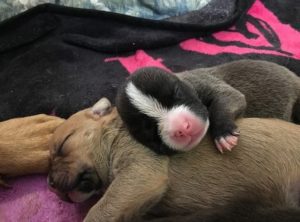 The babies were barely days old and the mother was bleeding residually, indicating that she had been dropped off shortly after giving birth to them.

There was no indication why they had been left — nor was there food or water to nourish the new mother.

She was also left without a chain, so she could have easily walked away from the litter to seek help, sans her babies.

But she remained diligently by their side, unwavering in her sense of motherly duty — even though staying would mean no immediate source of food or water until help arrived. 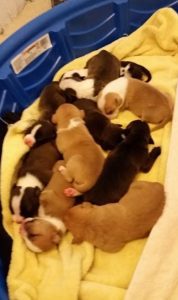 The shelter was happy to house them but nervous about how they would be able to foster such a huge family altogether.

Eleven mouths to feed is difficult to handle for most foster families, but separating the puppies from their mom at such a young age could be detrimental to their health and happiness. 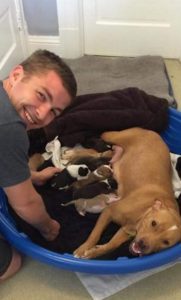 Fortunately, they were able to find a foster dad who was thrilled to take on the new family.

He squared away a spot for the mom to stay snuggly and warm with her babies while they nursed and grew.

The pit bull mom had an incredibly sweet disposition according to the shelter staff.

Though she had been abandoned to brave the city alone with her babies, she remained completely friendly and even let them gently handle her newborns. 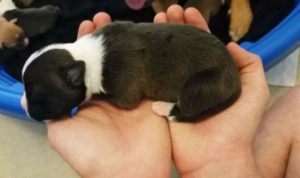 The family is expected to live with their doting foster father for the next several months until they are able to be separated and adopted to new nurturing households.

Until then, their stand-in dad has had a blast sharing their adorable photos with friends on social media. 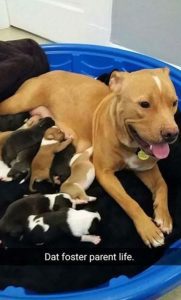 The mother’s devotion to her litter proves that when family sticks by each other, they can overcome any adversity.