Every dog I’ve ever met has been a champ when it comes to making friends.

After all, pooches are so friendly and sociable by nature, I think they’d have a harder time staying aloof.

That said, dogs tend to be at their most social with other dogs or with people. Every once in a while, you might catch one with a cat, or maybe befriend a horse, as we saw with this sweet interspecies friendship.

But it’s not nearly as common to catch a dog who’s besties with an undomesticated animal, one that’s from a species naturally shy of humans.

Fortunately, there’s now a sweet interspecies duo breaking the mold and proving the stereotypes wrong. Ingo, a Belgian shepherd, and Poldi, an owlet, are living proof that some friends are just meant to be together!

Scroll through the gallery below to see one of our favorite interspecies friendships of all time in action! 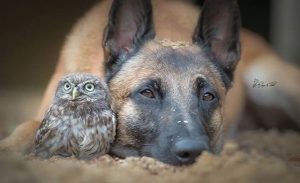 Ingo, a Belgian shepherd from a long line of police dogs lives in Germany with his owner, the photographer Tanja Brandt.

Brandt took a photography workshop years back, and then naturally combined it with her lifelong love of animals, especially dogs and birds of prey.

Over time, she started creating images of her dogs and birds in action. 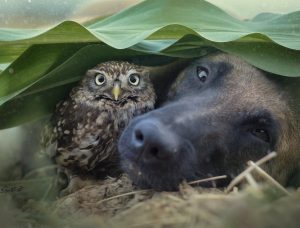 In addition to Ingo, Brandt has several other shepherd dogs.

She also shares her home with rehabilitated raptors, including hawks, falcons, and many owls.

One of her most photogenic and famous owls is a sweet little owlet named Napoleon, or “Poldi” for short. 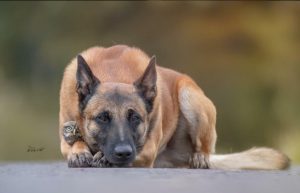 Poldi was the bird’s equivalent of the “runt of the litter.”

His egg hatched later than his siblings, and he was smaller and needed more care.

It quickly became clear that he was not a creature who would thrive in the wild and would be safest in a protected environment. 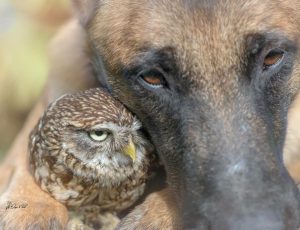 Ingo, somehow sensing that Poldi was vulnerable, decided to assign himself the role of protector and best friend.

Though other dogs might have seen little Poldi as an opportunistic snack, Ingo took Poldi straight away, almost as if Poldi were his own puppy.

That initial adoption evolved over time into a beautiful friendship. 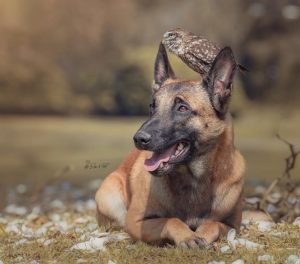 Now, Poldi is older and stronger, with owlets of his own.

He doesn’t need protection in the same way that he once did, so his connection with Ingo has turned into much more of a mutual bromance.

The dynamic duo spends as much time as possible together. 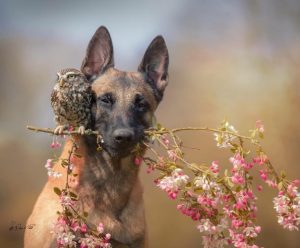 Sometimes, Ingo will go for a walk with Poldi hitching a ride on his back.

Other times, the duo will simply snuggle up together, with the petite Poldi finding a warm spot to nestle, like under Ingo’s chin, or behind his paw.

Occasionally, if Ingo is fetching something, Poldi will take the opportunity to land and grab a new and different vantage point. 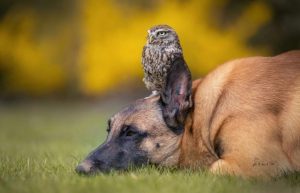 Poldi does have a special lady now, and Ingo is a dog with a busy interspecies social calendar, so these best buds sometimes find they have other responsibilities.

Still, whenever they can, they come back to one another and enjoy just hanging — two unexpected friends who totally adore each other.