Home
animals
Dog Owner Surprises Him With His Favorite Toy

Jaxon is a dog with very discerning taste. He has one special toy in pariticular that he loves. 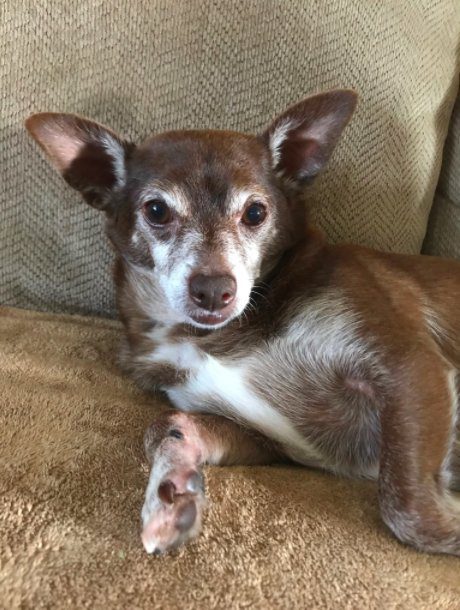 One toy, a very specific plush green alligator is the toy that the 12-year-old Chihuahua particularly favors. His mom, Kelli Brown, is not sure what it is about the Top Paw chew toy, named “Greenie,” but it is the only thing the senior dog will play with. This fact ended up going viral on Twitter.

“He was adopted from our local shelter on December 8, 2014, and I put one of these toys in his stocking the first year we had him (our other dog got the red version — which was a dragon),” Brown said. “And this has just always been the only toy he’s ever played with!”

“We have tons of toys in the house, but he only has eyes for his Greenie,” Brown added. 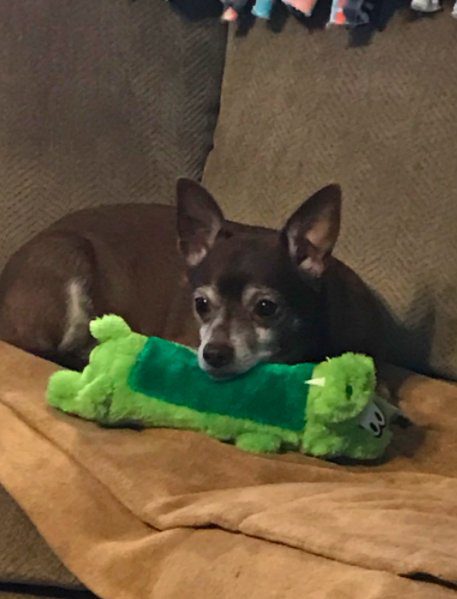 Jaxon’s much-beloved toy can get ragged, and as with all playthings, it needs to be replaced (Jaxon usually goes through two toys a year).

However, Brown could not find they toy when she went to her pet supply store. 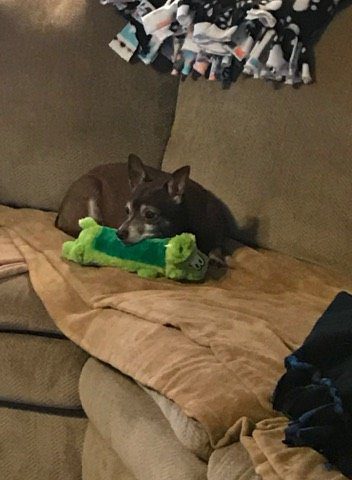 The worst had happened: His favorite toy had been discontinued.

Brown canvassed the internet in search of Greenie and had no luck. That’s when she decided to reach out on social media for assistance.

@PetSmart PLZ HELP! This Top Paw toy has been discontinued but it’s the only toy 12 y/o Jaxon will play with. Got any laying around? We’ll buy them all up if you’ll let us! Our internet search brought us no luck. Very sad boy here!! ? pic.twitter.com/TplOosErsn

“PLZ HELP! This Top Paw toy has been discontinued but it’s the only toy 12 y/o Jaxon will play with,” Brown wrote in a tweet to PetSmart. “Got any laying around? We’ll buy them all up if you’ll let us! Our internet search brought us no luck. Very sad boy here!!”

Well-intentioned Twitter users weighed in, tweeting out links to other available toy dinosaurs and dragons that could possibly appease the shrewd pooch, but Brown explained that Jaxon would not be satisfied with any reptile pretenders.

“We’ve tried other green toys over the years, he won’t have anything to do with them,” Brown wrote. “And there was a red & yellow version of his fave toy (a dragon!) same size, same fabric, just a different color and no dice. What a weirdo, lol.”

Brown’s search seemed hopeless until her tweets were heard by a PetSmart employee in Texas, Kendyl Kercho. Jaxon’s story had been shared by the WeRateDogs Twitter account, and as a fellow dog lover (and Chihuahua owner), she knew what she had to do.

“I think what inspired me is my love for pets. I have a desire to do anything in my power to help animals anywhere and everywhere,” Kercho told The Dodo. “I figured if anyone could help, it was me because I work at PetSmart where the toy comes from.”

i work at petsmart and i can check our clearance to see if we have any!

Kercho posted on an employee Facebook group looking for the elusive alligator and searched the store during her shift. It seemed like the toy had been completely cleared out without a trace until she checked one last out-of-the-way place.

“I actually squeaked audibly when I found the clearance toy bin in the back where they were tucked away,” Kercho said. “I immediately told my manager, ‘These are the toys I’ve been looking for for my Chihuahua friend in Kentucky!’”

Kercho included a few extra treats to make Jaxon’s care package more special. “I ended up finding around seven or eight [toys], asked if Jaxon had a favorite treat and sent his goodies on their way,” Kercho added. 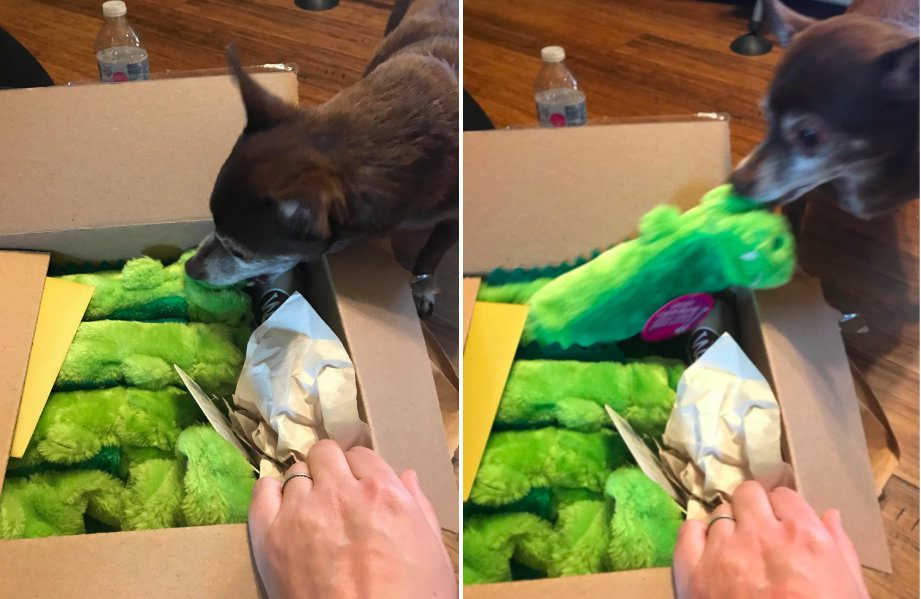 Jaxon was over the moon. 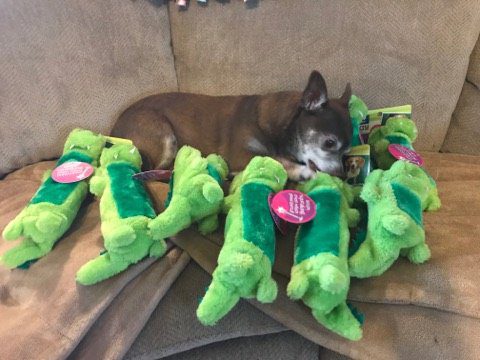 His mom was pretty thrilled, too: “Happy to say the power of the internet came through BIG TIME. He is so happy right now … thank you all,” Brown tweeted.

Now Jaxson has eight brand-new toys to enjoy, and his mom thinks Jaxon should be set for life. The toys he doesn’t use will be set aside for other dogs in need. “I’ve seen on Twitter that there are other dogs who also love this toy, so any extras we were to receive would be shared with friends,” Brown said.

Jaxon is content playing with one at a time, though his dog brother may have other ideas. “He’s enjoying the one that he picked out if that box,” Brown added, “but we put the rest up to keep them safe from his brother — who is a toy destroyer!”

Even though Jaxon lives over a thousand miles away, Kercho is glad she took the time to help. She just looks at her own Chihuahua, named Brock, and knows she did the right thing. 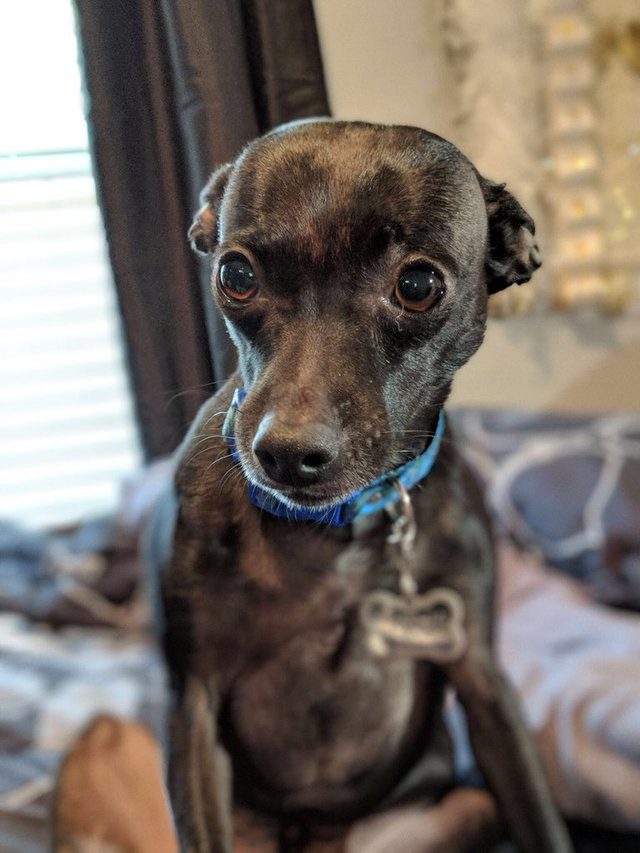 “When I saw that [Jaxon] had received [the toys], I actually teared up a little,” Kercho said. “He’s a very good boy who deserves the world.”