Here is a beautiful story about canine love and the incredible communication between dogs.

Tommy and his owners, the Termolen family, live in Illinois. Tommy was a shelter dog with a striking all black coat and a star-shaped patch of white on his chest.

The Termolens were initially set on rescuing a female dog, but when they met Tommy, the Termolen boys all fell instantly for the energetic pup. The family went home with Tommy and never regretted their “second choice.”

Tommy was popular in his Illinois neighborhood with all the other canines. When the Termolens decided to move upstate to New York, Tommy was missing his canine pals.

Tommy was a senior dog now, but he was still able to get around and moved a bit slower at the ripe dog age of 16. However, he was still very sociable and enjoyed other canine company.

One day, Mrs. Termolen was out running errands when her son sent her a text. He told her there was another dog inside their home; he was a bit shaggy and younger without a tail, and the dog tag read “Jackson.”

They had no idea how the two dogs, Tommy and Jackson, came to be good pals, but Jackson found his way to the Termolen home four blocks away from his owner’s house. Moreover, even somehow got inside the Termolen home.

Mrs. Termolen and her son walked Jackson safely to his home.   However, Tommy and Jackson had such a special bond that Jackson would visit Tommy daily.

Jackson would bark at the door or run to the deck and bark. He even tries to go through the garage door when it is open. The Termolens always let Jackson in to visit or let Tommy go out and play with his new New York pal.

Jackson is about five-years-old and keeps his friend Tommy young. They get along great and like exploring the neighborhood together. 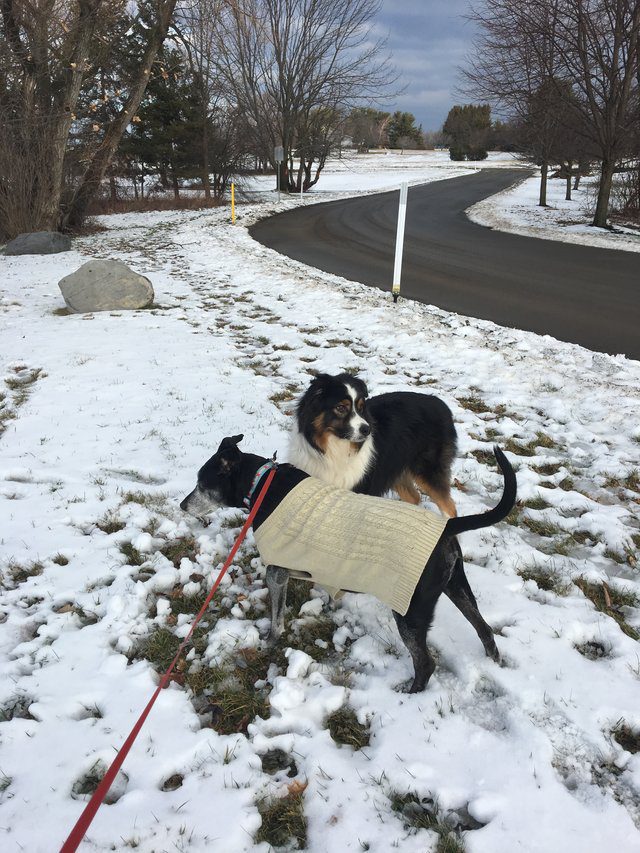 The Termolens realize that their beloved Tommy is a dog whose days are numbered, and that is a difficult thing to grasp.

They hate to think what will happen when Tommy passes away.

“It will be heartbreaking when it is over. I am not sure I will able to maintain composure when Jackson visits and Tommy is no longer here to greet him.”

If you loved this story of sweet doggy friendship, please SHARE with friends and family and watch these other videos of adorable doggy friends playing together.