White lions and white tigers are just about as rare as big cats get.

When Ivory, a white male lion, and Saraswati, a white female tiger, got together at T.I.G.E.R.S. (The Institute of Greatly Endangered and Rare Species) sanctuary in South Carolina, they created something extremely rarer, an adorable litter of white liger cubs.

But when Ivory, a white male lion, and Saraswati, a white female tiger, got together at T.I.G.E.R.S. (The Institute of Greatly Endangered and Rare Species) sanctuary in South Carolina, they created something even rarer: a litter of white liger cubs. Apolo, Yeti, Odlin, and Sampson are four of the rarest and cutest cats in the world.

In fact, out of about 1,000 ligers, they’re the only white ligers in the world! As ligers, they’ll grow to a massive size. Their uncle is Hercules, the biggest cat in the world, weighs more than 1,000 pounds.

Dr. Bhaglavan Antle, who founded T.I.G.E.R.S., thinks Yeti will challenge Hercules’s title. “I am convinced Yeti will make the Guinness Book of Records. He’s so big already — has such a big, fat head and paws. All the cubs grow so quickly but Yeti is already so much bigger.” Dr. Antle notes that their personalities started to appear early… Apolo, the smallest of the litter, behaves most like a kitten, always seeking attention and purring. And they grew quickly, gaining about a pound a day. It’s hard to believe, but these little guys will be able to reach 10 feet by the time they’re two years old.

They may grow to weigh up to 750 pounds, even little Apolo! 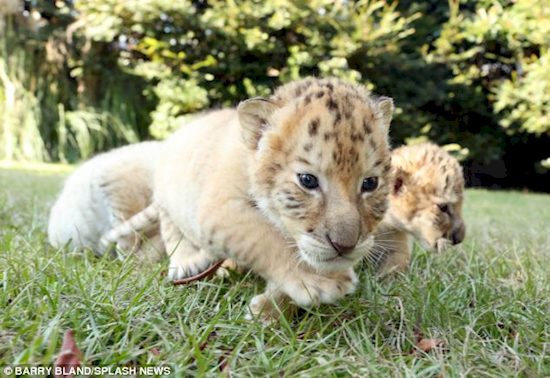 Breeding ligers is a controversial practice. Ligers are only known to exist in captivity, largely because of geography. In the wild, tigers roam in Asia, while lions stick to Africa. Also, interbreeding of species generally doesn’t happen in the wild, period.

But, true to their cat roots, the ligers themselves seem quite happy to be the center of attention! SHARE these unique and adorable cats with all your friends!