In 2009, Astronaut Melvin was about to have his official NASA photo taken. Melvin really wanted to get his dogs into the shoot with him, but dogs were not allowed in any of the facilities. He had to figure out a way to get the dogs in with him somehow.

“I had a van and I drove the dogs in,” Melvin said. “NASA doesn’t allow dogs to be on-site, so when I showed them my NASA badge, I kept the window up…and I had the stereo blasting because the dogs were barking. So I gunned it and the [security guard] didn’t chase me or anything.”

Melvin and the dogs were almost in, now all he had to do was get them into Studio 8 at the Johnson Space Center without anyone noticing.

“I had all these dog bones, and they were just sitting there eating the bones, just grubbin’ and happy,” he said. “The dogs just ran over to me. And [I said to] the guy who took the picture, Robert Markowitz, ‘Dude, start shooting!’ Jake was nibbling my ear. Scout was all up in my grill, like, ‘Hey, what’s going on here? What is he doing?’ But if you look at the picture, all of us are holding hands, all of us are connected. And it was just incredible. That picture was just amazing to me.” 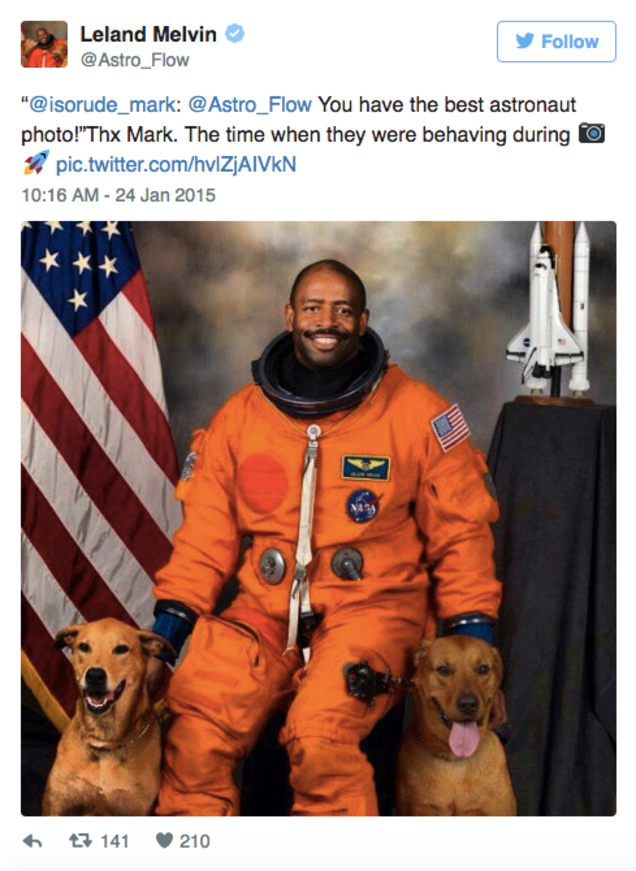 Before the famous photo was taken, the trio was formed almost by accident.  It was Thanksgiving day that Melvin rescued Scout while making dinner in his kitchen.

“I was cooking a turkey and Jake was right beside me waiting for something to drop, and my neighbor came over and said, ‘Leland, Jake’s in the front yard.’  I was confused because Jake was next to me,” Melvin said.  “I went outside and there was this dog in my yard.  So I brought him in, and he had no collar or tag.  No one claimed him.  I think someone might have dumped him because he had heart worms.”

Both Jake and Scout have since passed, but Melvin has nothing but fond memories of those two beautiful dogs, who took a simple official work photo and made it famous.  Melvin plans to immortalize the dogs in his upcoming book.

“We had so many good memories, a lot of good stories with my dogs,” Melvin said. “They were my boys.”