Have you ever wondered how dogs get jobs in law enforcement? An interview with K-9 handler and Oregon policeman Billy Wells reveals that sometimes it’s a series of lucky coincidences. Of course, people who see the potential in dogs like his partner, Shaka, are a big part of those lucky coincidences. Shaka has even made the news! Here, StubbyDog gets the scoop from Officer Wells on how Shaka joined the force. 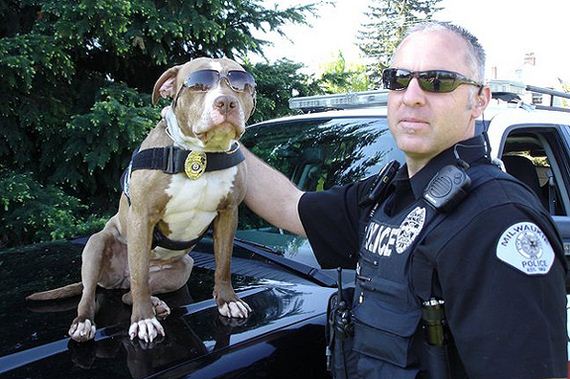 Q. Can you tell our readers about Shaka’s training? How did you become her handler?

A: She had been working with Washougal Police Department in Washington State as a Drug Detection K-9 for approximately four years when I was fortunate enough to become her handler. Shaka was found at a city pound by a pit bull advocate in New York. When the new guardian realized her great drive, she contacted Washington State Patrol Academy (K-9 Drug Detection Training Unit). They were interested in Shaka’s skills, and after 18 weeks of training, she graduated and was adopted by Washougal PD. Her training continued with her new handler at that agency until staffing issues forced them to downsize their K-9 unit.

Washougal posted Shaka on the OPCA (Oregon Police Canine Association) website. My department jumped at the chance. Fortunately for us, Milwaukie Police Department was the first agency to offer a new location for Shaka, and after an internal selection process, I became Shaka’s new handler. I had previous bomb detection experience as a K-9 handler and had a genuine interest in working with Shaka. Training is ongoing, with weekly real-life scenarios set up in four-hour blocks. This keeps both of us proficient in our work. Additionally, Shaka has to be certified twice a year through OPCA in order for us to be recognized as an OPCA Team.

Q: How would you describe your experiences with pit bull type dogs prior to working with Shaka? 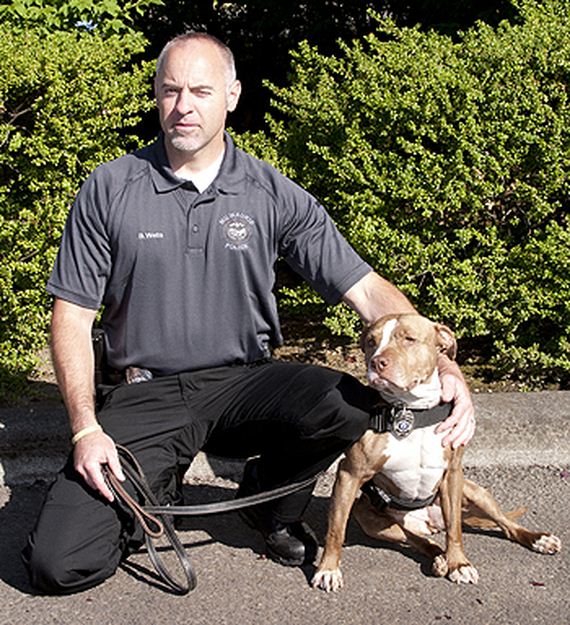 A: Since I was raised around pit bulls, my experiences with them have been nothing but great! I can tell you that in my 20 years in law enforcement, I have never responded to a “pit bull attack” or a call related to aggression by a pit bull. I have been called to dog bites involving just about every other breed, but those calls don’t make the news or sell papers. Since I have had Shaka, I have been interviewed by the local news channels. I believe they are interested in the breeds being used by law enforcement. Although the interviews definitely put pit bulls in a good light, the quote that I like to throw out – “They get a bad rap!” – never seems to show up on TV!

Q: We hear that Shaka is a real superstar at her job! Do you have a favorite story about working with her?

A: I have had Shaka for such a short time that every real-life deployment is my favorite story. Shaka stands out above the rest who do the same type of detection work. She is a people pleaser and a wonderful pet.

Q: What’s been the reaction to Shaka from your community?

A: Pit bulls are very common in our community and the surrounding Portland metropolitan area, so I have gotten nothing but positive feedback from citizens. A few folks have been reluctant to approach and pet her, but I always encourage it. The more people realize that pits are just like any other breed of dog, the better it will be for all.

Q: Some people believe that banning pit bull type dogs will make communities safer. In your experience, what creates a safe community for people and their pets?

A: I think that the notion of banning the breed is completely outrageous. If the public only knew how many Golden Retriever bites are reported nationwide, they might think the same about those. I can tell you for a fact that the only reason pits are in the news is that they are sometimes associated with criminal activity, such as dog fighting. Yes, their bites are powerful, which makes them an obvious choice for criminals. Society needs to look at pet owners good and bad, and hold them responsible for their pet’s issues. Ultimately pets’ behavior is often determined by the way they are treated. I believe knowledge of the breed will also make communities. I say that because when people realize that pits do make great pets and should not be banned due to exploitation by owners, then the news will focus on more informational, newsworthy stories!

Q: At the end of the day, where does Shaka go?

A: Shaka goes home with me every day. Shaka has a loving home and usually goes everywhere with me and my family. She has a kennel that resembles my home, and it has a bath station, heat and air conditioning. Some folks might think that it is a bit over the top, but with Shaka’s thin coat, she is very sensitive to temperature and becomes over-heated or chilled very easily.