United Airlines is facing another pet scandal after it mistakenly flew a German shepherd to Japan instead of Kansas.

Passenger Kara Swindle told KCTV-5 that she and her family were in the process of moving from Oregon to Wichita, Kan., and had their 10-year-old dog, Irgo, fly cargo. But when the family landed on Tuesday, they were greeted with a great Dane dog instead. Later, they learned that United swapped the dogs’ itineraries and mistakenly put Irgo on a flight to Japan. 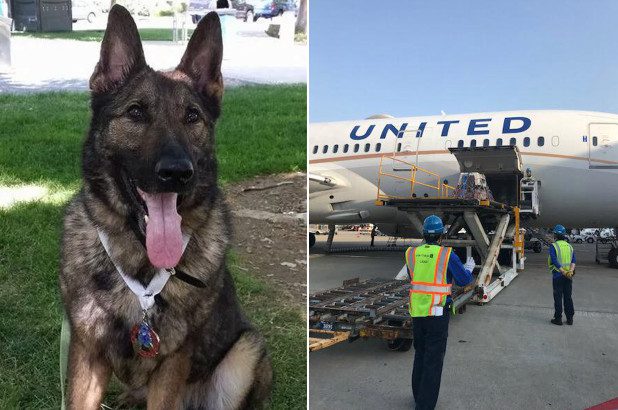 United Airlines mistakenly shipped Irgo (left) to Japan. The airline later sent his owner a photo (right) to confirm they found the dog.

United was able to track Irgo when his plane landed. While the airline originally told Swindle that her dog could be quarantined for up to two weeks, it has since promised that a veterinarian will check on him in the airport and put him on a flight to Wichita.

A few hours later, United sent Swindle a photo of Irgo confirming that he landed in Japan.

“He’s been checked by a vet and he will be back on a flight tonight back to us!” Swindle wrote on her Facebook. “United doesn’t know how much they have f—– with the wrong people!”

“I just want to know where my dog is,” Swindle tells the news station. “The fact that we don’t have any idea is the most frustrating part. He could be in Kansas City and we have no idea because the paperwork is all messed up. They have our paperwork here saying that this is the correct dog, but we know it’s not. It’s just horrible.”

Meanwhile, United paid for Swindle and her two children to stay at a Marriott Hotel near the airport on Tuesday night.

“At this point, all I can do is be hopeful that my dog is going to be OK and return safely,” she says. “I don’t know what else to do at this point. I can’t cry anymore. I’ve cried too much.”

A United spokesperson told Huffington Post in a statement: “An error occurred during connections in Denver for two pets sent to the wrong destinations. We have notified our customers that their pets have arrived safely and will arrange to return the pets to them as soon as possible. We apologize for this mistake and are following up with the vendor kennel where they were kept overnight to understand what happened.”

This incident came just a day after a French bulldog died on a United plane after a flight attendant forced it to stay in the overhead bin.