Anna, an 11-year-old potbellied had been bought as a family pet when she was a baby. When the family moved Anna was discovered at their vacant property in Ontario, Canada. She was in a terrible state.

“The people who owned her put their house on an online auction,” Carla Reilly Moore, founder of Happy Tails Farm Sanctuary in Kingston, Ontario said. “They did not take Anna and told nobody that there was an animal on the property. By the time the new owner went to the property, more than two weeks had passed.” 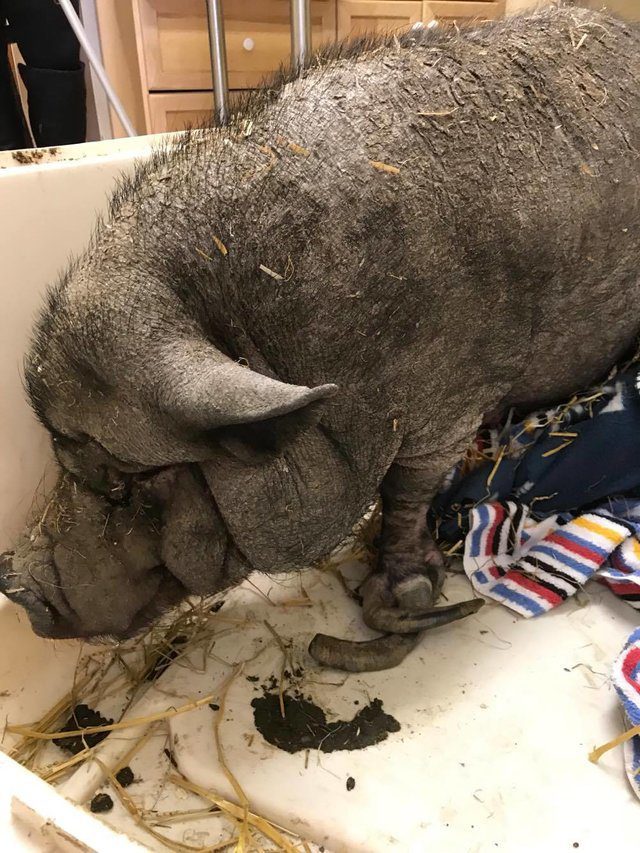 The already neglected pig went without food or water for over two weeks! She was discovered by workers from a scrap metal company sent to clean up the property found. They found Anna cowering in an abandoned shed.

“They contacted the OSPCA who did not come out for more than three days,” Moore said. “In the meantime, the employee of the scrap metal company and his girlfriend gave Anna food and water. The OSPCA said that, had they not done that, “Anna would have died the first night, she was that close to death.”

Anna arrived at the sanctuary, scared and in pain. Anna’s hooves were so overgrown she could not stand up without crying. It was hard to imagine her ever letting another human close to her again. 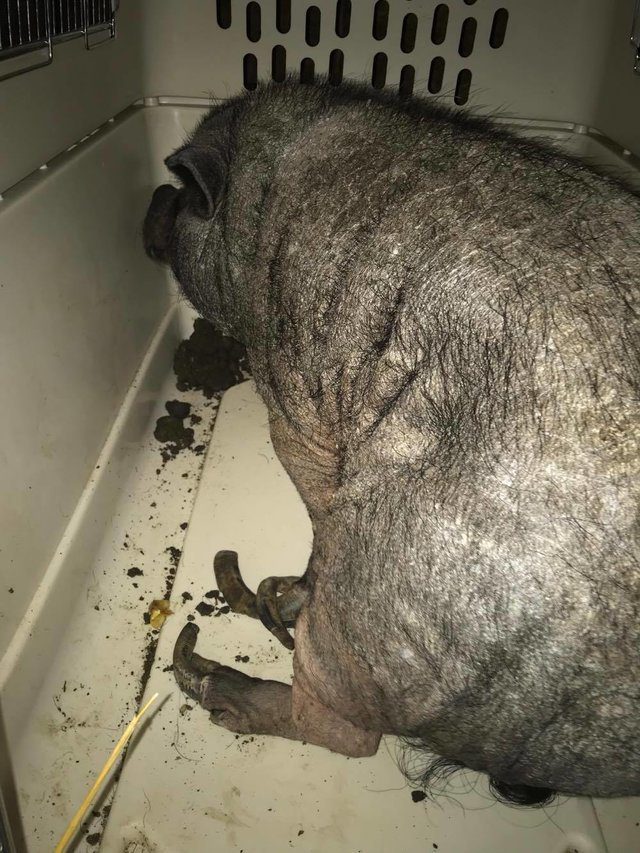 Since being taken in by the sanctuary and loved and comforted, Anna has made huge strides, physically and emotionally. Anna has surprised everyone.

“As it turns out, Anna absolutely loves to be pampered,” Moore said. “I sit with her at least twice a day and talk to her and sing to her. She really likes the song ‘You Are My Sunshine!'” 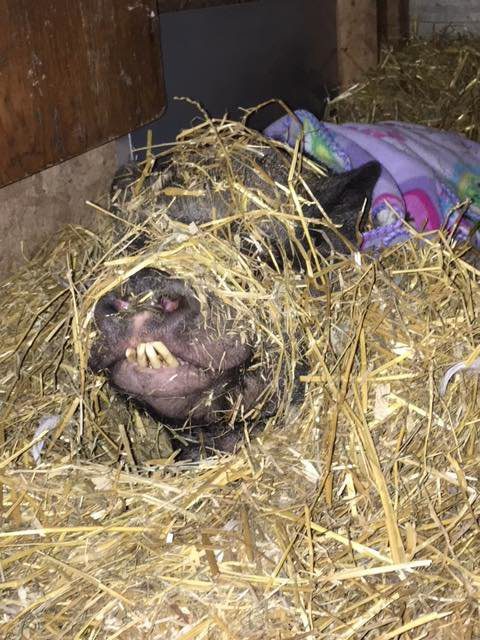 The potbellied pig is inspiring others. “Anna touched so many people’s lives, and one of those people is Jeni,” Moore said. Jeni had been following Anna’s progress and decided to do something especially sweet for her.

“She knit her a handmade blanket. She wrapped it up and put a beautiful note on it saying it was from Santa Claus,” Moore said. “Anna absolutely loves it! She loves to cuddle under her blanket in her straw, under her brand-new radiant heater, and be sung to and petted!” 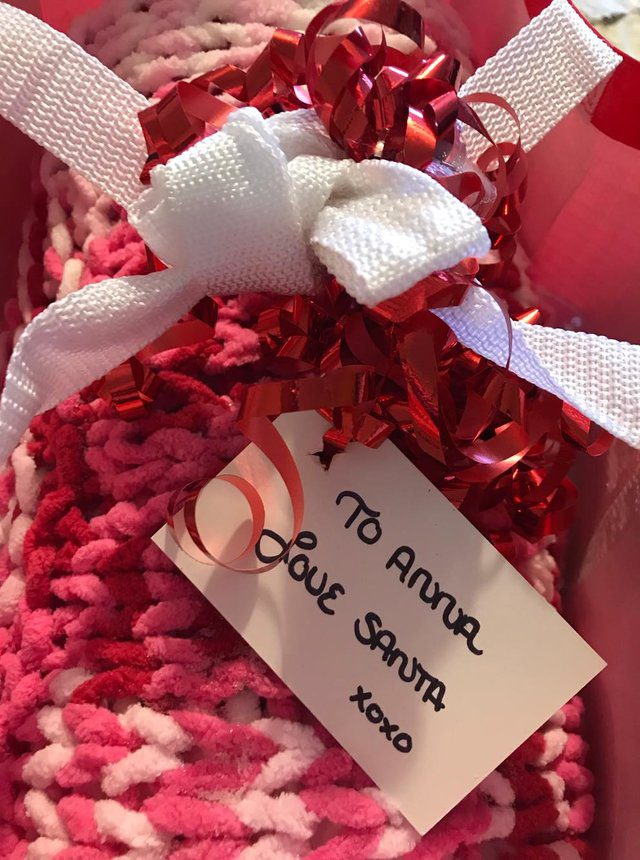 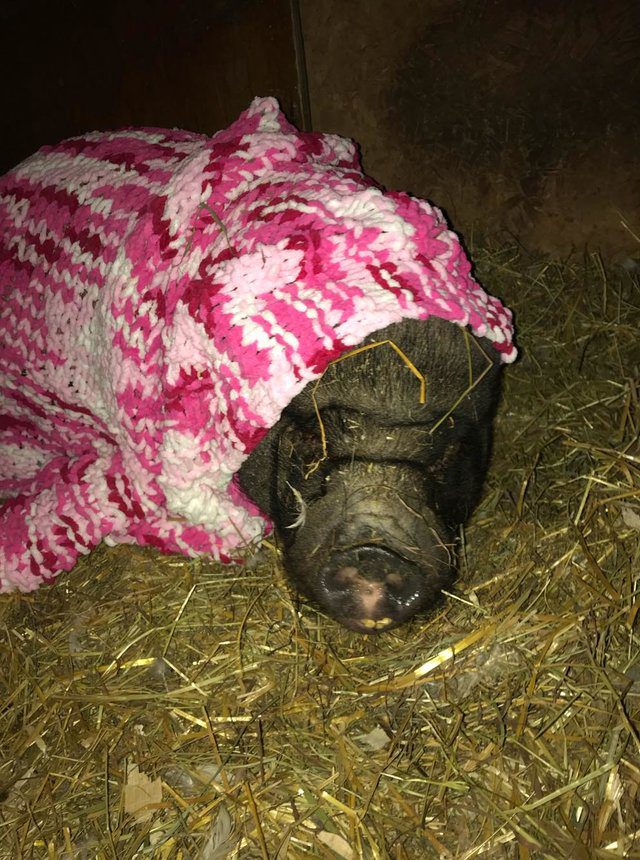 Anna is also making friends with the other pigs at the sanctuary. “Last night when I went in to check on her two of our other older girls were in her stall with her,” Moore said. “She’s starting to make friends and is more comfortable coming out into the main area of the barn.”

“To see her enjoy the love she is receiving is a double-edged sword. It’s hard to imagine being neglected for 11 years with no love,” Moore added. 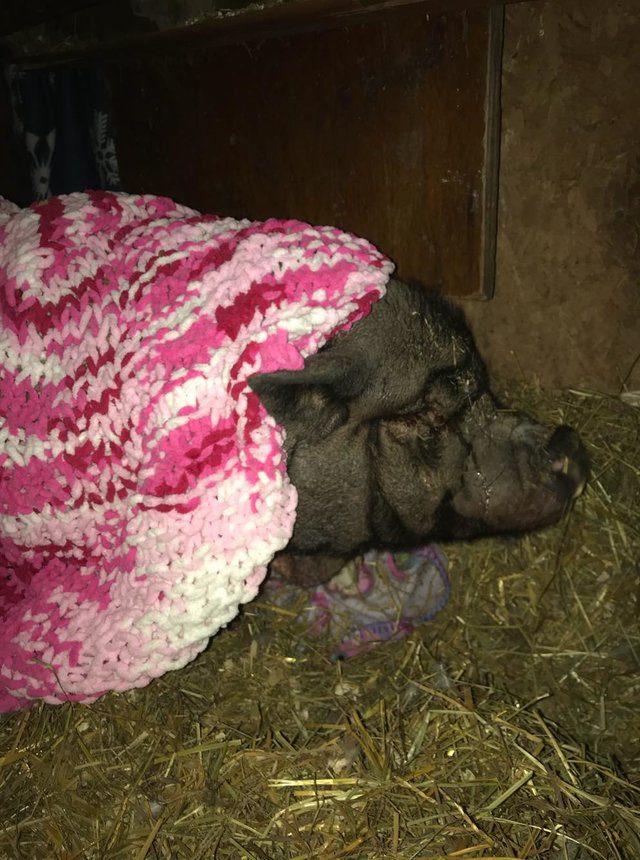 “Now she happily grunts when she sees me,” Moore said. “After her meal, she has become accustomed to snuggling in beside me as I rub her and scratch behind her ears and sing to her. She is a true testament of resilience, and every day shows me that no matter how hard things can get, it can be overcome with a little bit of time and a little bit of love.” 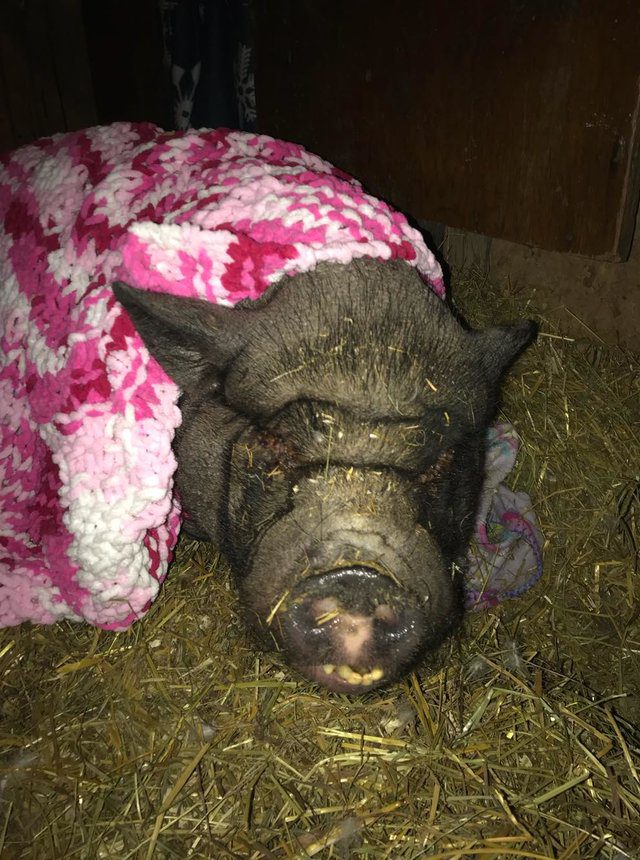