One soulful picture captures the painful torture that farming can inflict on orangutans.

In 2010, a mother orangutan ventured near a village in Borneo after a landslide, her little baby still clinging to her. The surrounding area had been stripped to create palm oil plantations — her home forest was gone and the deforestation had caused landslides like the one she had been caught in.

She was weak, starving and likely injured, and only traveled this close to humans because she was desperate to find food and shelter for her little daughter.

Sadly,, the welcome she received wasn’t a kind one. A group of villagers saw the mother and began to throw rocks at her and hit her with sticks, even though she was helpless, according to International Animal Rescue (IAR), which had a staffer stationed nearby. When a male orangutan who was also traveling with her tried to defend her and her baby, the villagers chased him away.

They continued to beat the mother until she collapsed. They then tied her up with ropes and pulled her little daughter off her. When the dying mother mustered the strength to fight for her baby, IAR wrote, the villagers dragged her over to a pool of water and held her underwater until she passed out from the near-drowning. Then they threw her into a cage. “She was still alive but could barely sit up,” IAR said. “As she no longer posed any threat to the villagers they dragged the infant by the rope attached to her foot and tossed her into the cage with her dying mother. A large crowd of people gathered around the cage and took amusement in their suffering. The mother used what strength she had left to wrap her arms around her terrified baby while her infant desperately tried to chew through the ropes still tied to her mother’s arms and legs.” Fortunately, an IAR veterinarian stumbled onto the scene. She managed to rescue the pair from the crowd, but despite medical attention the mother died, unable to recover from her previous injuries and the water in her lungs.

While the cruelty in this case might be extreme, death isn’t an unusual fate for orangutans affected by palm oil production. Orangutans have lost 80 percent of their habitat due to human activities like deforestation in the past decade alone they’ve lost around 50 percent of their population.

Their forest homes are being leveled to make way for plantations and the orangutans are often shot on sight. If not, they often die in the wildfires that deforestation can cause. Mothers are also killed so their babies can be sold into the exotic pet trade — which could have happened to this little one if IAR hadn’t been on site to stop it.

Instead, the little orangutan whose mother fought so valiantly to protect her moved to IAR’s rescue center, where she was named Peni and spent four years learning how to be a grown-up orangutan. And last fall, she was released into the forest to hopefully live the life her mother never got to live. 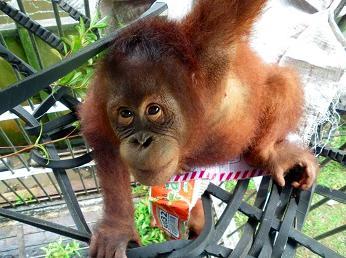 The rescue group reported that since her release, she’s reunited with two former friends from IAR’s orphanage and appears to be doing well. Her former caretakers monitor her daily.

“After such a tragic start to her life, everyone involved in Peni’s rescue, rehabilitation and release is hopeful that she has a long and happy life ahead of her,” the organization wrote at the time of Peni’s release.