It’s hard to resist sharing food with your dog, especially when she looks up at you with those, well, puppy dog eyes. Sure, people food is for people, but which ones should be forbidden?

While some human foods are safe for dogs in small doses, there are others that are downright dangerous. Before you sneak your dog a bite of something under the table, find out about these surprisingly dangerous foods for dogs, starting popcorn on the list.

Plain, air-popped, unsalted, unbuttered popcorn may be okay in small amounts. But let’s be honest: how often are you enjoying plain, unsalted, unbuttered, un-delicious popcorn? For dogs, high levels of fat and sodium typically found in a microwave, movie theater, and home-doctored popcorn can lead to dehydration in the short term and obesity in the long term. In addition, the hard, un-popped kernels can hurt teeth and gums on the way in. And since they’re not digestible, they make for an unpleasant exit. 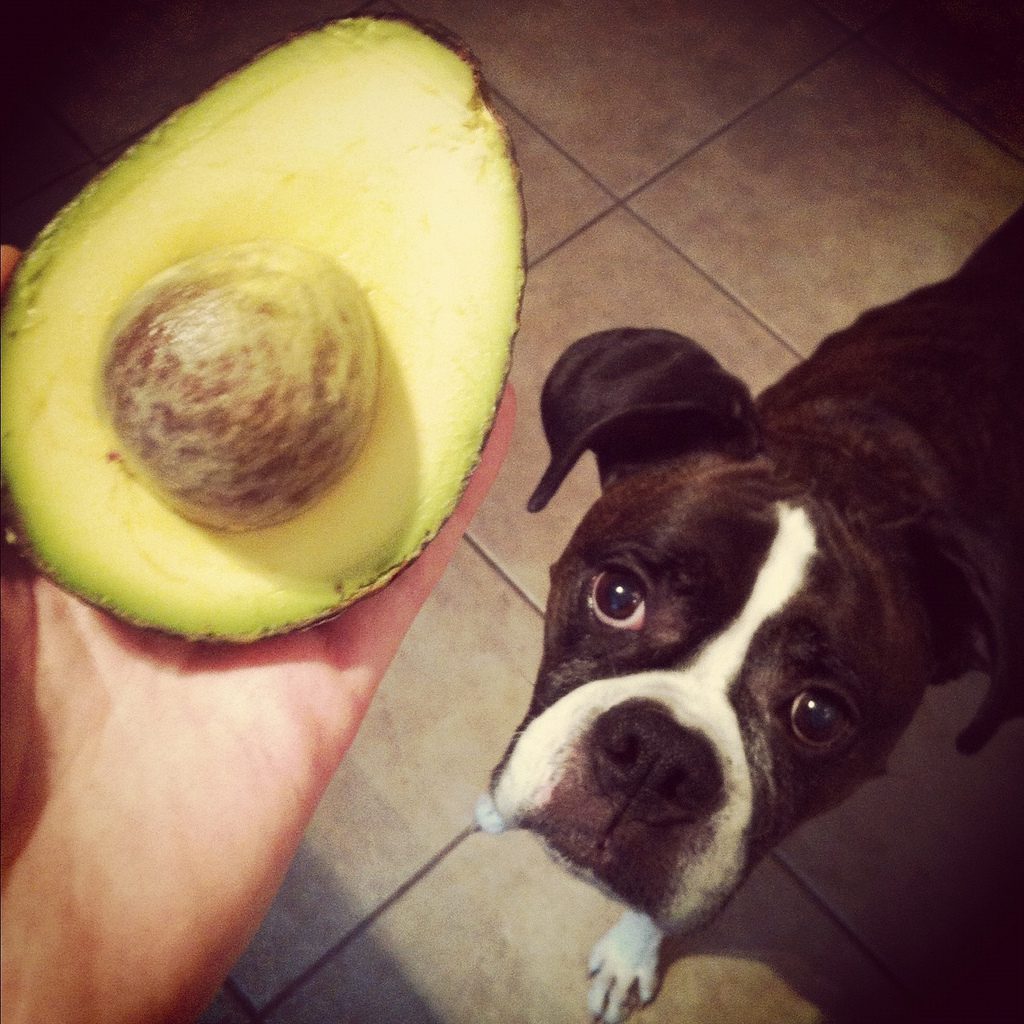 This one’s especially surprising, because some dog treats include avocado as an ingredient. The true culprits in avocado toxicity are the skin and leaves, which contain persin, an oil-soluble toxin that can be dangerous to non-human mammals. As explained by the ASPCA, pets who are susceptible to persin may experience “respiratory distress, congestion, fluid accumulation around the heart, and even death.” Note that avocado is safe if you avoid the skin and leaves—so it’s ok as an ingredient in dog foods, for example.Many sources, including the ASPCA, note that dogs are not as susceptible to persin poisoning as animals like horses. Still, it’s better to be safe than sorry. Finally, there’s one part of the avocado that can definitely cause problems: the large pit, which is a serious choking hazard.Macadamia Nuts

Nobody’s sure exactly what about macadamia nuts is toxic to dogs, only that they can cause vomiting, ataxia (the loss of control of body movements), weakness, and depression. In other words, macadamia nuts can make dogs very, very ill. Thankfully, as the Merck Vet Manual notes, “most symptomatic dogs recover without any specific treatment.” So if your pup accidentally eats a macadamia nut, she may get pretty sick for a while, but a full recovery is expected. 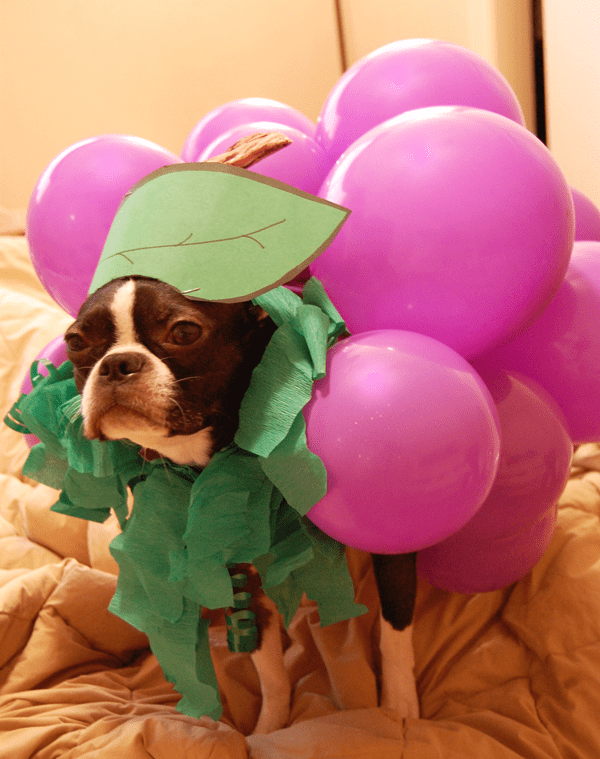 Grapes are among the people foods most toxic to dogs. They can lead to kidney failure and even death. According to the lead medical officer at DoveLewis Emergency Animal Hospital in Portland, “what is most dangerous about grapes and raisins is that not every pet who eats them will suffer, but there is no way to know in advance.”Raisins and grape juice can be even more dangerous because they’re in a more concentrated form. Bottom line, keep your pup away from anything to do with grapes.

Garlic and onions belong to the Allium plant family, and are toxic to dogs in any form, whether fresh, cooked, dried, or powdered. According to Banfield Pet Hospital, allium plants damage dogs’ red blood cells, decreasing oxygen flow, and can also lead to anemia, which may cause organ damage. So think twice before you slip your dog an onion ring at the drive-thru. 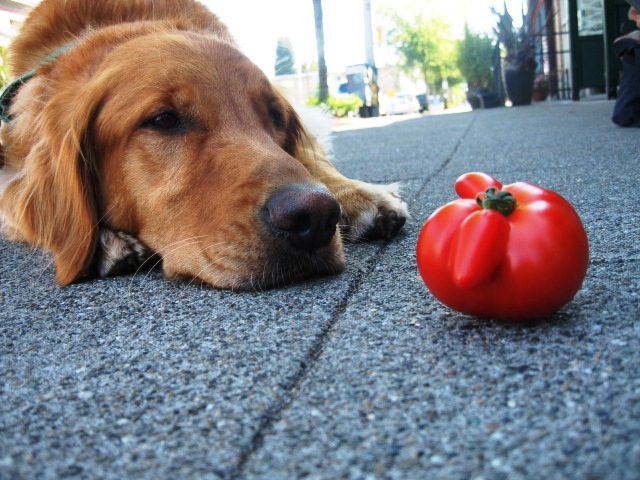 Ripe tomatoes themselves aren’t a problem, but if your dog ingests a green, unripe tomato or the leafy green part of the plant (including stems), watch out. According to the Pet Poison Hotline, un ripened tomatoes and tomato plants contain a toxin called solanine that can cause gastrointestinal distress, lethargy, weakness, and confusion.

Green potatoes can cause the same problem, so while it’s okay to sneak your dog a spoonful of mashed potatoes here and there, don’t let her gnaw on a raw one!

Coffee, Tea, and Other Caffeinated Substances

We all know chocolate is toxic to dogs, but did you know that caffeine is just as dangerous? Caffeine is a dangerous stimulant, and according to the ASPCA, it can cause “vomiting, diarrhea, increased thirst, restlessness and an increased heart rate” in pets. Early treatment (and induced vomiting) is key to preventing more serious problems, so if you know that your your dog has ingested coffee, tea, or an energy drink,don’t wait for symptoms to show up. Get to the vet right away.

This one is a huge surprise: dairy can be really bad for your dog. Cheese is a popular dog training treat, but too much cheese can cause constipation or diarrhea in the short term, and in the long term, obesity and lasting gastrointestinal issues. However, as with humans and dairy, some dogs will be more sensitive than others. It’s possible your dog can chow down on some cheese with no problem. As with most special treats, moderation is key. If you have a cheddarhead on your hands, it’s probably okay to give him a little bit of cheese here and there. Just watch for signs of distress, and don’t overdo it. Cheese may be safe for some dogs in moderation, but for others, it can cause gastrointestinal distress.

Sugar-Free Gum (and Anything Sweetened with Xylitol) 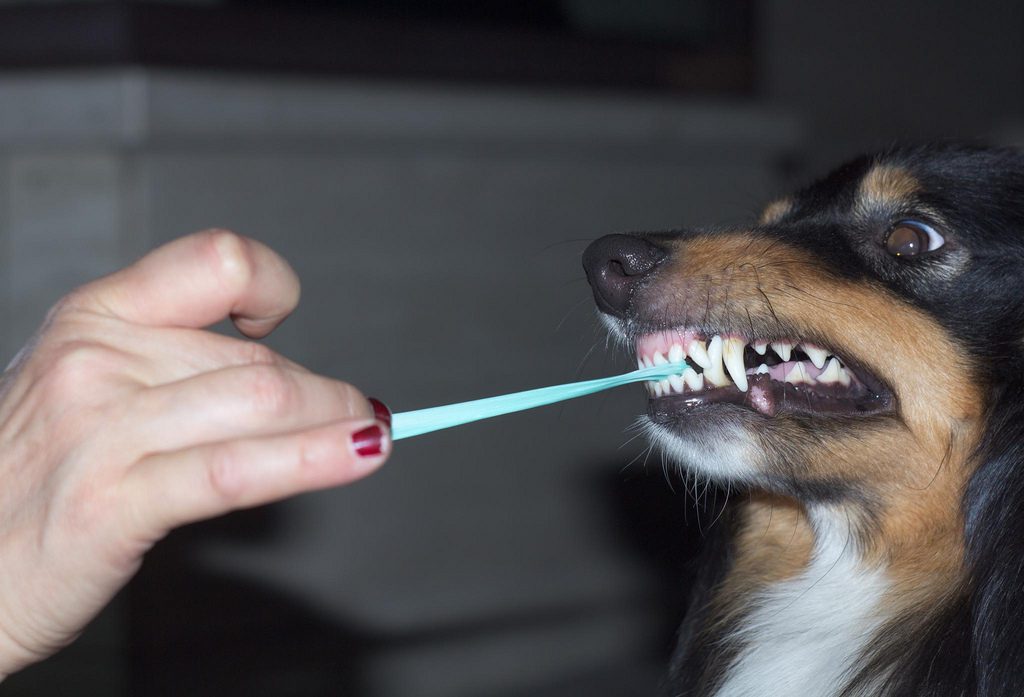 Xylitol is a naturally-occurring substance in popular use as an alternative sweetener for gum, candy, and other foods…and it’s deadly to dogs. As noted by VCA Hospitals, xylitol ingestion causes life-threatening hypoglycemia (dangerously low blood sugar). This is among the most toxic substances to dogs found in everyday people food, so be extra-careful about where you store your gum.